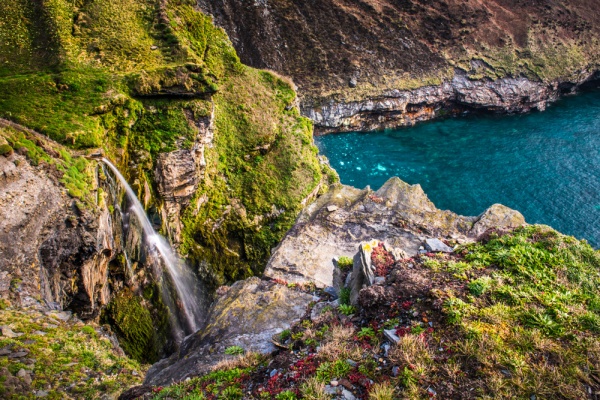 The rugged coast near Boscastle is one of the most beautiful sections of Cornwall. If you head south from Boscastle's Tudor harbour you will come to the Iron Age promontory fort of Willapark, but if you head north instead you will find one of north Cornwall's hidden gems, the waterfall of Pentargon, which spills down a sheer drop of over 100 feet at Beeny Cliffs.

Thomas Hardy is most associated with Dorset, but Hardy knew the Boscastle area well. He met his first wife here whilst on assignment as an architect, and the spectacular scenery on the Pentargon walk inspired some of his most eloquent poetry. His poem 'Under the Waterfall' tells the story of a romantic picnic by the waterfall and evokes the ''chasmal beauty' of the location:

Hence the only prime
And real love-rhyme
That I know by heart
And that leaves no smart,
Is the purl of a little valley fall
About three spans wide and two spans tall
Over a table of solid rock
And into a scoop of the self-same block;
The purl of a runlet that never ceases
In stir of kingdoms, in wars, in peaces;
With a hollow, boiling voice it speaks
And has spoken since hills were turfless peaks. 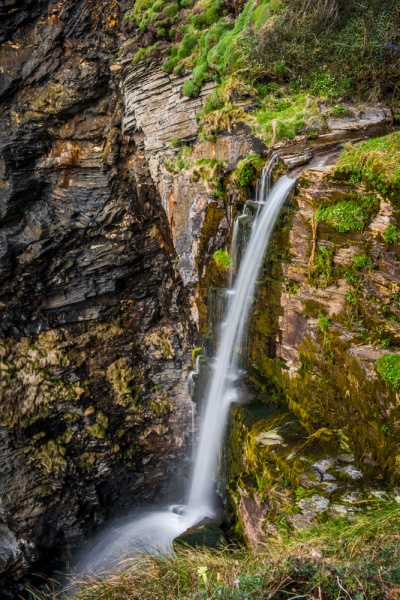 The waterfall from the south

Pentargon is a hanging valley, where the river has failed to cut through the hard stone of a broad glacial valley, leaving it to plunge down almost sheer cliffs to the shore far below. The hanging valley is formed because the action of the waves has eroded the cliffs much faster than the action of the stream can cut through the valley floor from above.

At Pentargon the falls spill nearly straight down from the lip of the valley to the shore, a distance of 120 feet (roughly 37 metres). If you are lucky, you might spot seals in the water below you.

After heavy rain the waterfall can be spectacular, and in windy conditions the water can be blown almost straight up in a fine spray.

Getting to the waterfall is straightforward, which is not the same thing as easy! This is the Cornish coast, after all, and the clifftop path dips and climbs. The steepest section rises up from Boscastle harbour, following the slope of the hill to the top of Penally Point. From there the trail turns north and follows the contour of the coast along the edge of several stone-walled farm fields. 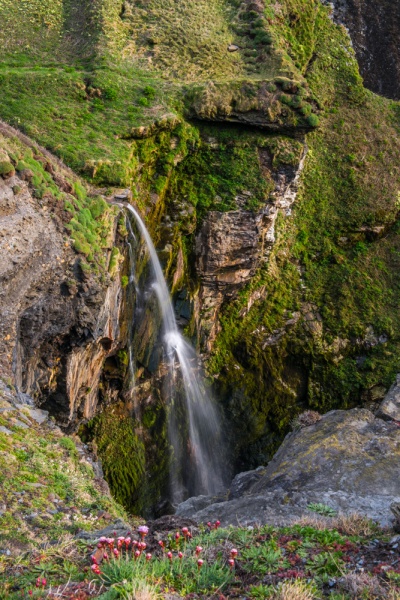 The waterfall from the north

The closer you get, the more difficult it is to see the entire falls. You can get very close to the waterfall on the north bank of the stream, but please be very careful, as there are no barriers and a fall would certainly be fatal.

You can also opt to make a longer excursion to Pentargon Falls part of a longer circular walk to Beeny, looping back to the path along the River Valency and then back to Boscastle.

About Pentargon Waterfall
Address: Boscastle, Cornwall, England
Attraction Type: Countryside - Waterfall
Location: From Boscastle take the coastal path north. You will see the falls ahead of you after about one mile. Use PL35 0HE for the Boscastle paid parking area.
Location map
OS: SX108920
Photo Credit: David Ross and Britain Express

More self catering near Pentargon Waterfall