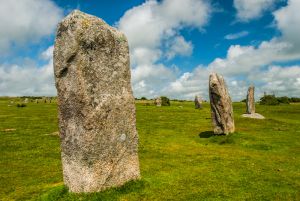 The Hurlers are a series of three stone circles aligned in a row. This is the only known example of a stone circle linear grouping in England, making The Hurlers extremely unusual.

The stone circles stand on flat ground below the rock formation known as The Cheesewring. To the west of the circles is a pair of standing stones known as The Pipers.

The circles probably date to the early Bronze Age. They are oriented on a roughly NNE by SSW axis. From end to end the alignment is 162 metres in length.

The northern circle is made of 15 stones, and excavations have revealed that there originally 10 more stones. The stones are spaced evenly, suggesting that there were originally five more stones, making 30 in total, spaced around a circle measuring 113 feet across.

One oddity is a narrow section of granite stones, acting like a paved walkway, running between the northern circle and the central circle. This 4000-year-old pavement has been described as unique by archaeologists. The pathway was uncovered in the 1930s and re-excavated in 2013. It was recorded and then recovered in order to preserve the pavement.

The large middle circle is the best-preserved of the three. It is slightly egg-shaped, measuring 137 x 132 feet. It has 14 standing stones remaining out of an original number of 28 equally spaced stones. Many of the stones have been dressed, with flattened tops and flat inner sides. A granite slab stands at the centre of the circle. The centre of the circle has been sprinkled with quartz crystals, probably produced by shaping the stones.

The southern circle is the smallest at 108 feet diameter, and the most damaged. It is made of nine stones, seven of which have fallen. They may have been knocked over by cattle using them as scratching posts. Within the central and southern stone circles are small pits caused by tin mining activity.

It seems likely that the stone circles formed part of a processional route involving other local monuments, with which there are several known or suspected alignments. The northern two circles align perfectly with Rillaton Barrow burial mound, while the southernmost pair of circles align with a round cairn to the south-west. Another stone circle and stone row are aligned at right angles to the central circle.

It is clear that the arrangement of circles played an important part in ritual observance, and they were carefully built and aligned as part of a complex system of ceremonial significance. One of the most fascinating parts of visiting the circles is trying to make sense of its connection to the surrounding landscape, where numerous ancient monuments can be seen.

The name of the circles come from a local legend that the stones were the remains of local men who were turned to stone for playing the game of hurling on the Sabbath. The Pipers are said to be a pair of musicians who suffered the same fate for the sin of playing music on a Sunday. Similar tales are told of stone circles elsewhere in Cornwall and were probably a part of Christian attempts to use moral stories turn local inhabitants way from pagan observances.

This is an open-access site, easily accessed from the parking area at the south end of the village. It is also accessible from the parking at the north end of Minions, though with a longer walk. You can also walk from The Hurlers to the Cheesewring for wonderful views over the surrounding area. 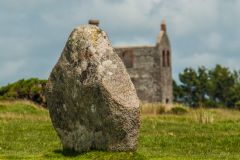 More self catering near The Hurlers Stone Circles >>

More bed and breakfasts near The Hurlers Stone Circles >>

This king's frst wife was earlier married to his brother, Arthur

He had 5 more wives