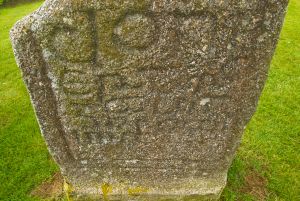 King Doniert's Stone consists of the remains of two richly carved 9th-century Celtic crosses. The crosses commemorate the Celtic king Dumgarth, who ruled the kingdom of Dumnonia until he died by drowning about AD 875.

The cross shafts are of local granite, very well dressed and beautifully carved in the intricate patterns so favoured by Celtic artists. The northernmost stone, called the Doniert Stone, is 1.37 metres in height and has decoration o three sides and an inscription on the fourth side.

The inscription reads 'doniert rogavit pro anima'', which is interpreted as meaning that it commemorates King Doniert (or 'Durngarth' or 'Dwingarth') of Dumnonia. Doniert was the son of Caraduc, King of Cornwall. Records show that he drowned around AD 875.

The second stone, known, aptly enough, as the 'Other Half Stone', is much larger, measuring 2.1 metres high. Taken together, the stones are the only known surviving 9th-century crosses in Cornwall, and the Doniert Stone is the only known example of a stone bearing the name of a Cornish king, and the only one which bears the name of a recorded historical person.

The stones stand above an underground chamber (not visible), reached by an 8-metre long underground tunnel.

The site, overlooking the River Fowey, may stand on the line of an ancient track across the moors.

The crosses are wonderfully carved and well worth a short visit.


He ruled jointly with his wife, Mary

He was followed to the throne by Queen Anne