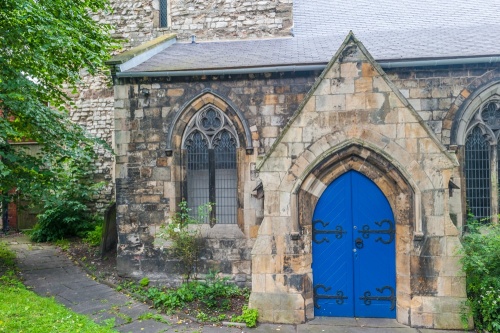 The church of St Mary Bishophill is one of the oldest in York and its west tower is built with re-used Roman stone. During the Roman occupation, Bishophill was the site of a civilian settlement. When the tower was erected in the 10th century Roman stones were readily available so the builders simply incorporated them into the new structure.

The tower foundation consists of Roman 'saxa quadrata', or squared stones. These Roman stones support courses of magnesian limestone and gritstone rubble in a traditional Saxon herringbone pattern (ie. one course leans one way, the next course reverses the lean). 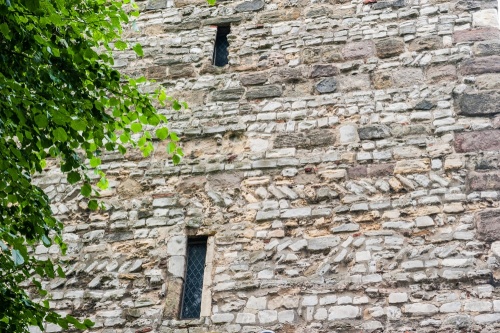 Anglo-Saxon herringbone stonework in the tower

The top of the tower appears to be built in a later architectural style, but an investigation by historians revealed that there are putlog holes (used for timber framing during construction) all the way up the tower, suggesting that the entire structure was built at the same time. The large belfry windows are of a type common in the Anglo-Saxon period.

The nave and north aisle date to the 12th century, the chancel is a century younger, while the south aisle are north chapel date to the 14th century.

Inside the church look for Anglo-Saxon carved stones near the tower arch. The tower arch may be Roman, and if so, was likely a major entrance arch giving access to the Roman city of Eboracum.

The octagonal font is medieval but stands on a 19th-century base. The font cover is Georgian and is decorated with a dove and acorn finial. On the wall is a Georgian funeral hatchment. 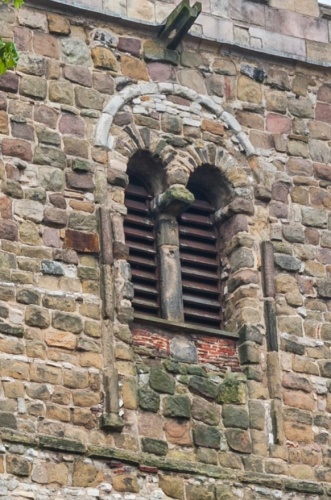 The reredos behind the high altar dates to 1889 and was designed by Temple Moore, a pupil of Sir George Gilbert Scott. Moore also designed the pulpit and its sounding board.

Four panels of 15th century stained glass are in a chancel window. They depict the Virgin Mary, St Michael, an Archbishop holding a pastoral cross, and an Archbishop with a pallium (an ecclesiastical vestment). There are two medieval bells on the floor near the font, one cast in the 14th century and the other in the 15th century.

The best memorial is a wall tablet in memory of Frances Nicholson (d 1721). Another interior highlight is a fragment of a carved Viking cross.

A more modern highlight is a set of Stations of the Cross by a local artist named Fiona Kahn FitzGerald. 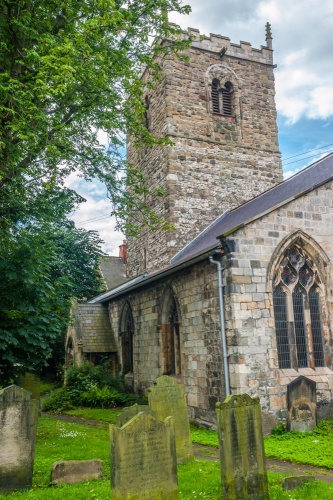 St Mary Bishophill is possibly the oldest church in York but it usually gets missed by most tourists and ignored by most travel guides. It is close to the city wall on Bishophill Junior between Smales' Street and Prospect Terrace. The church is usually open four afternoons per week, but it is always a good idea to check with the official website before making a special visit.