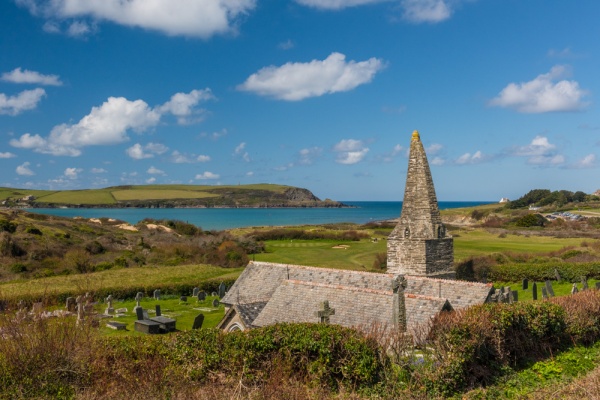 Poet John Betjeman loved Cornwall and he loved historic churches. He must have been in heaven when he visited St Enodoc's church at Trebetherick, on the estuary of the River Camel. Betjeman spent happy childhood holidays at Trebetherick, and wrote one of his most popular poems about his love for the area:

Betjeman was buried in the churchyard at St Enodoc's when he died in 1984. It is easy to understand his delight in the church, for it is hard to imagine a more beautiful location than this. St Enodoc's stands amongst sand dunes looking out over the wide stretch of Daymer Bay. It can only be reached by - carefully - crossing a footpath that leads directly across a fairway of the St Enodoc Golf Club.

Why was the church built in such an unusual and dangerous location? 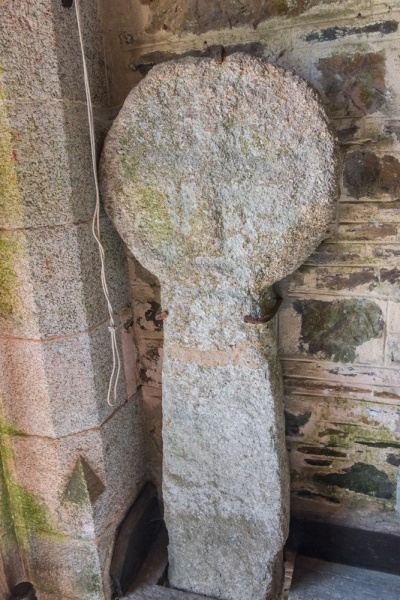 A Celtic wayside cross in the porch

It was probably built on the site of a cave where Enodoc dwelt as a hermit in the 6th century. Enodoc, sometimes known as Wenedoc, came to Cornwall from south Wales and established a hermitage by the mouth of the Camel. Curiously, it is not clear whether Enodoc was a male or female. S/he died around AD 520 and her feast day is celebrated on 7 March.

An ancient Christian oratory, possibly associated with Enodoc, was discovered at nearby Brea Hill in 1822 when a storm caused sand to shift, revealing foundation walls. The sands have since recovered the remains.

The church began as a chapel tied to St Minver and dates to at least the 12th century. Its location amid the sand dunes bordering Daymer Bay put it under constant threat of inundation by the blowing sand. By the 16th century the sand had become such a problem that St Enodoc's was known as 'Sinking Neddy' and by the 18th century the church had become completely submerged in the sand.

The intrepid parishioners and vicar had to hold at least one service annually to maintain the tithes, so each year they had to be lowered into the sanctuary through a hole in the roof. It was not until 1863 that the church was rescued from its sandy grave, cleaned, and restored by architect JP St Aubyn. The dunes were then stabilised so the church would no longer be overwhelmed by blowing sand. 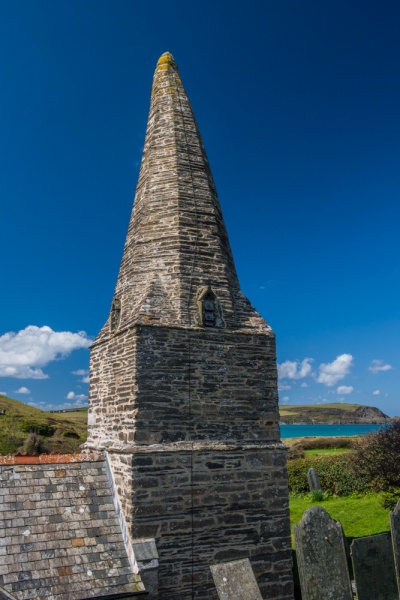 The oldest part of the building dates to the 12th century, with additions in the 13th and 15th centuries. It is laid out with a nave and chancel, a south aisle, south porch, and a north transept. The tower is unusually located to the north of the church rather than the more typical west or south. The tower is topped with a very striking broach spire with trefoil belfry openings on each face. In the tower is a single bell, retrieved from the wreck of the Immacolata, an Italian vessel that ran aground on Doom Bar.

Many of the church furnishings date from the Victorian restoration, but you can still see the base of the 15th century chancel screen. To the left os the screen is a stone mortar owl, used locally for grinding grain. It was found amid the sand dunes and given to the church.

The oldest historic feature is the round font, which was carved in the 12th century. Near the font is a wooden chest which was recorded in a church inventory in 1613.

In the south porch is a memorial stone to John Mably and his daughter, who were buried within a week of each other in 1687. Also in the porch is an ancient Celtic cross. The cross head and shaft were found built into the churchyard wall in 1863. 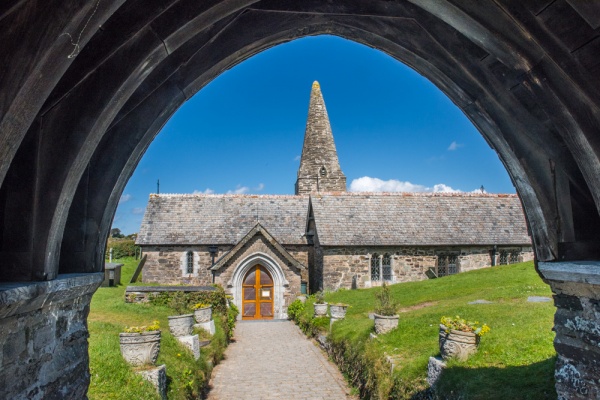 The church from the lych gate

On the south wall is a tablet commemorating Ernest Betjeman, father of the poet. His son Sir John Betjeman is buried in the churchyard. As an adult he returned to Trebetherick and purchased the house known as Treen, which overlooks the 12th hole of St Enodoc's golf course. The poet died at home in 1984 after a long battle with Parkinson's disease.

Another memorial remembers three crewmen of the Maria Asumpta, which ran aground on The Rumps in 1995. On the north wall is a plaque to Second Lieutenant Ronald Roseveare, who died at the Battle of Ypres in 1916.

St Enodoc's church is set in a simply stunning natural landscape, with glorious views towards the bay, and within a short stroll of the Iron Age fort of Brea Hill. The easiest way to reach the church is to take the signposted footpath off Daymer Lane, at the southern edge of Trebetherick village.

The footpath leads directly across the golf course, so please be careful and watch for golfers. It is a well-travelled footpath so you should be in no danger of you just take basic precautions and keep your eyes open. There is a paid parking area at the end of Daymer Lane but many people simply park along the side of the lane, as we did. 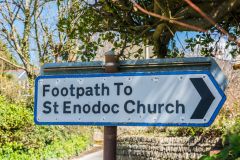 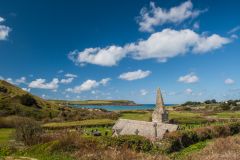 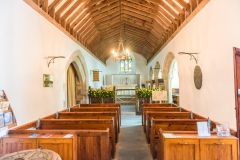 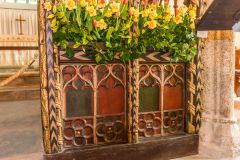 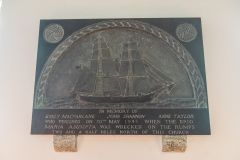