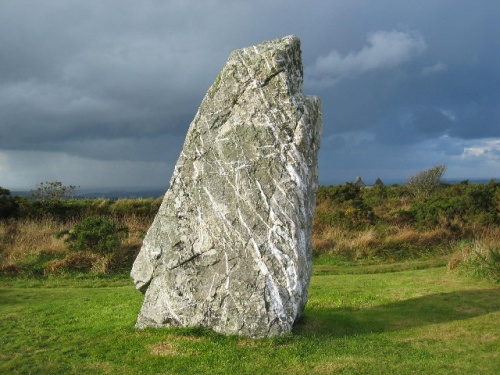 St Breock Downs Monolith
The tallest and heaviest standing stone in Cornwall, sometimes called Men Gurta. The stone was originally 16 feet high and weighs over 16 tonnes. It stands on the top of the down, offering wonderful views over the surrounding countryside.

The stone was probably erected in the late Neolithic or mid-Bronze Age (roughly 2500-1500 BC). It stands inside a cairn, or mound of small stones, measuring 33 feet across.

The stone fell down in 1945, which gave archaeologists the chance to investigate what lay beneath it. The stone was found to be set upon a layer of small quartz pebbles. A pair of shallow depressions were scooped into the pebbles. At other sites similar hollows have been found to contain the ash of cremated remains, but at St Breock they were empty.

After archaeologists had finished investigating under the stone, it was re-erected in its original location. Only about 10 feet of the stone now show above ground; the remaining 6 feet are buried beneath the surface.

What was it for?

The simple answer is that we don't know, though we can guess that the stone a ritual function. The area is rife with other prehistoric features, including barrows and another, smaller, standing stone. It seems reasonable to assume that all the Bronze Age monuments on the Down ere linked in some way.

The monolith features heavily in local folk tales and was used as a boundary marker for St Breock's parish. It is located very near the Nine Maidens Stone Row site.

Finding the monolith is easy once you know how, but first-time visitors might find it confusing - we certainly did! There is an English Heritage fingerpost of the Rosenannon road. You turn onto a lane running under the wind farm, with the wind turbines on the hill to your right.

The Monolith is about 100 yards down this lane on the righthand side. There is an English Heritage information panel and a short path into the field where you can clearly see the Monolith ahead of you.

This cleric and scholar served as tutor to the young Princess Elizabeth, later Elizabeth I


He was secretary to the English ambassador at the court of Charles V, then Edward VI's secretary

His most famous work was Toxophilus (1545)

Which of the following was NOT married to Henry VIII?

The answer was really married to Charles II