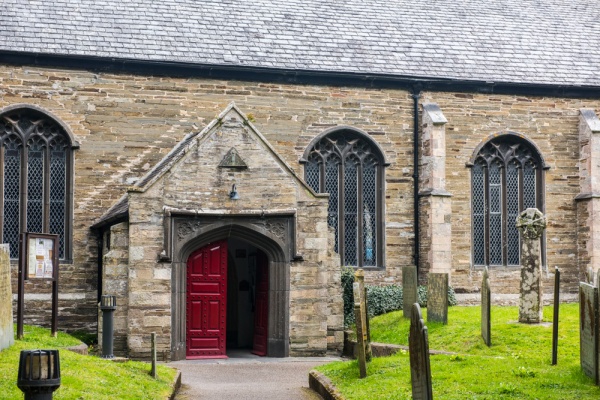 The history of St Petroc's church goes back to the 6th century, when Petroc himself established a church here around AD 518. Petroc was a Welsh nobleman, educated in an Irish monastery. He set out with his followers in a boat, and the winds and tide brought him to the mouth of the Padstow river. There he built a monastery, with a school, farm, and church to serve the monks and minister to the local population.

Petroc went on to travel widely and found more churches in Cornwall, his native Wales, and Brittany. He converted King Constantine of Cornwall to Christianity. He died while returning to Padstow, and his body was brought to the monastery he had founded for burial.

In AD 916 Athelstan of England conquered Cornwall, and granted St Petroc's church the right of sanctuary, one of just three churches in Cornwall to be given that status.

In AD 981 a band of Viking raiders destroyed Petroc's church, leaving nothing but ruins. Very little has survived from that period, but outside the south porch is an ancient Celtic cross, set upon a modern shaft. Near the south-east churchyard gate is the base of another cross. It probably stood in front of the monastery gates. 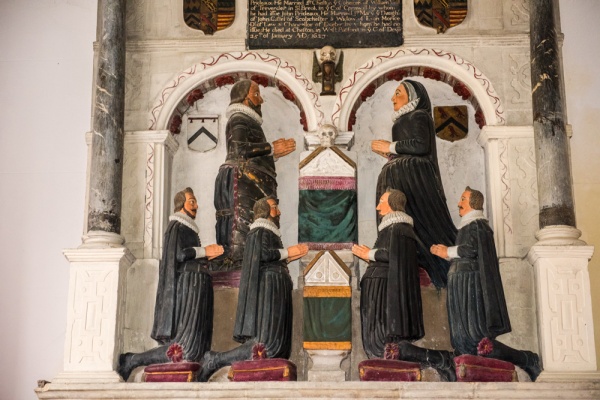 In the 12th century, a priest of Meen Abbey in France stole the saint's bones. A monk from Padstow was sent to retrieve the bones if he could. He succeeded, and brought Petroc's relics back to Padstow in an ivory casket, which is still on display in St Petroc's church.

Around 1100 a new church was built on the site of Petroc's monastery. The base of the present tower survives from this period. Beginning around 1425 that Norman church was rebuilt, using Caen stone from Normandy.

In the south porch you can see a coat of arms to the Nanfant family and the royal emblems of Richard II. Near the south door is a memorial to the crew of the Albert Edward Lifeboat, lost at sea on 6 February 1867.

The interior is full of historic interest. Look up and you'll see original medieval wagon roofs in the nave, the aisles, and the Lady Chapel. The font is 14th century, made of Dolerite, quarried locally at Cataclews Point. The font sides are carved with the apostles, three on each side. Each corner has a carving of an angel with the Book of Life. 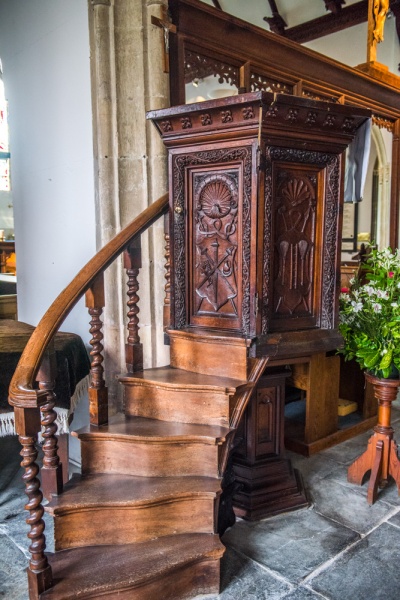 Look for the memorial plaque to Dr Marley on the north wall. Dr Marley was a friend of novelist Charles Dickens, who honoured his friend by borrowing his name for Marley's Ghost in his short story, A Christmas Carol.

The pulpit is a beautiful piece of woodwork in wineglass style, dated to around 1530. All but one of the carved panels are original. Each panel is carved with scallop shell emblems, the badge used by pilgrims travelling to Santiago de Compostela in Spain. It seems likely that pilgrims took ship at Padstow for their voyage to Span, and left money to St Petroc's church.

The screen dates from 1900 but it incorporates a very old carved crucifix from Oberammergau, brought back to Padstow by pilgrims. 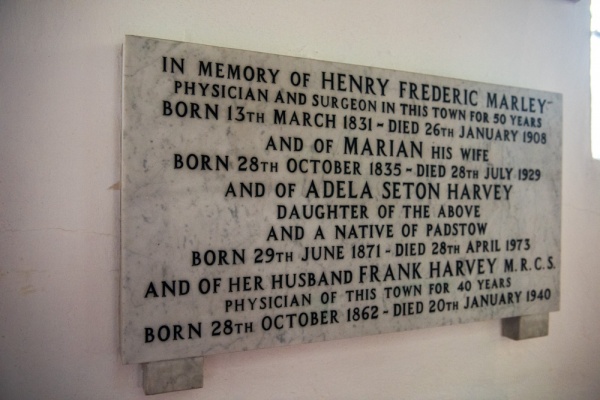 To the right of the high altar is a medieval holy water stoup carved with a crude depiction of St Petroc. This is the oldest likeness of St Petroc in existence and probably stood in the porch of the old church.

Near the chancel step is a memorial brass to Lawrence Merther (d. 1421). Merther was the priest at Padstow when the present church was being planned, but he died before it could be completed.

The Lady Chapel is said to have been restored by Sir John Nanfant, Ambassador to Portugal and High Sheriff of Cornwall under Henry VIII. He gave money to restore the chapel in thanks for surviving a near wreck off Cape Cornwall. The Nanfant coat of arms is on the south wall exterior. The east window is a memorial to two Victorian vicars, Rev. William Rawlings (d. 1836) and Rev. Richard Tyacke (d. 1896). Unusually, the memorial contains only text, with no images.

St Petroc's is a remarkable church, with a history going back almost 1500 years. There is so much of historic interest.

The church is usually open to visitors during daylight hours and was open when we visited. It is just a short walk up from the harbour. 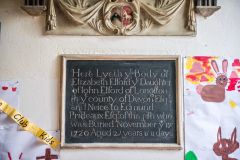 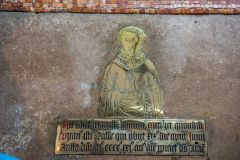 Self Catering near Padstow