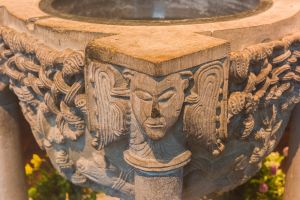 The largest church in Cornwall, St Petroc's is dedicated to the patron saint of the region and founder of Bodmin. The church is largely 15th century, with Norman underpinnings, and in the churchyard is a 6th-century holy well dedicated to St Guron.

Around the year 500 AD a hermit, or holy man, named Guron established a cell here, near a well. The well still stands outside the south aisle of the present church. A religious community grew up around Guron's cell, and around 530 AD a Christian missionary named Petroc took over leadership of the community.

Petroc was a Welsh prince who trained as a priest in Ireland before coming to Cornwall and establishing a religious foundation near Padstow. After living at Padstow for some time Petroc came to Bodmin and made it the base for preaching Christianity throughout Cornwall and the west of England. The location became known as 'Bod Mynach', or 'Monk's Abode', or 'House of the Monks', which gives us the modern name of Bodmin.

Petroc established a Benedictine monastery and made Bodmin a centre of learning. When he died in 564 AD he was buried at his monastery in Bodmin.

The monastery continued to grow throughout the pre-Norman era, and from 930-980 served as the see of the Cornish bishopric. During the pre-Norman era, the monks of Bodmin produced a remarkable illuminated manuscript, known as The Bodmin Gospels, which is now held in the British Museum in London.

King Athelstan gave generously to the monastery and granted the monks large estates and privileges. The Normans were not so generous, and the monastery was stripped of lands and property was granted to secular priests.

But change was in the air, for in the early 12th century Bishop Warelwast of Exeter re-established the Bodmin monastery as an Augustinian priory. From this point, the choir of the monastic church was used by the canons, and the nave became the parish church.

In 1177 the Abbey of Mevenus in Brittany bribed a canon named Martyn to steal St Petroc's remains and bring them across the channel. Henry II was outraged and threatened the Abbot of Mevenus. A monk from Bodmin was allowed to travel the Brittany and retrieve the saint's relics. The French monks gave him an ivory casket as an apology, and the monk returned to England, stopping at Winchester on the way so that Henry could pay homage to the saintly relics. The ivory casket still survives, though the bones have been lost; presumably scattered at the Reformation.

The priory grew wealthy and built a new church. The Prior of Bodmin became lord of the manor and de facto ruler of the town. The church was rebuilt from 1469 and was for many years the largest church in Cornwall. The 15th-century church retained the earlier Norman tower, though the top section of the tower was rebuilt.

When the priory was dissolved by Henry VIII the monastic buildings were sold off, and the stone stripped for other building projects. The church survived because it was partly used as a parish church. The priory ruins are mostly hidden underground in the vicinity of the church.

Perhaps the most frequently photographed historic feature inside St Petroc's church is the Norman font, with its beautifully carved bowl depicting foliage and winged figures at each corner. The finest monument is the marble tomb of Prior Thomas Vivian, showing the prior's effigy lying on a chest, or altar.

Pieces of an ornate late 15th-century wooden screen have been reused as bench ends, wall panelling, and the reredos behind the high altar. The lectern features a trio of re-used medieval misericords, possibly brought to Bodmin from another church.

The church is usually open daily to visitors. 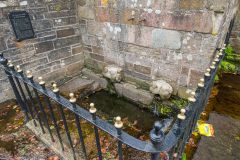 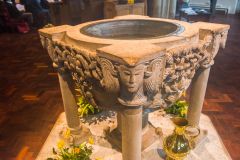 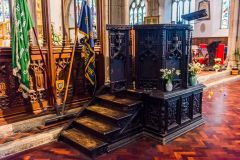 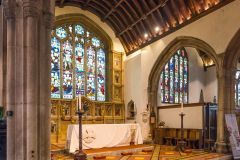 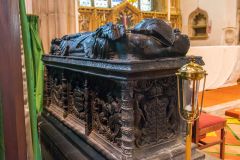 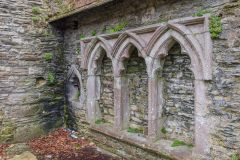 The act brought England and Scotland together under Queen Anne, with Scotland accepting the Hannoverian succession