HERITAGE HIGHLIGHTS:   One of the best-preserved Iron Age hillforts in south-west England 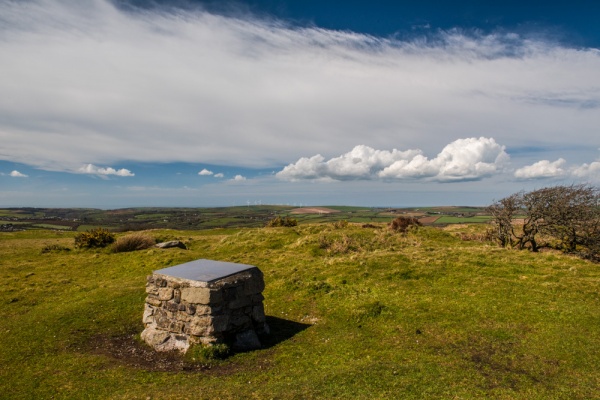 The summit of Castle an Dinas

Castle an Dinas is a superb example of an Iron Age hillfort, located on a broad hilltop near St Columb Major. The hillfort was built during the 3rd century BC and is one of the most impressive and archaeologically important Iron Age sites in south-west England.

The hillfort occupies the summit of Castle Down and offers sweeping views to both the north and south Cornish coasts. The hillfort is composed of three concentric rings of ditch and bank defences, enclosing an area 850 feet in diameter.

Within the central area at the summit of the hill are a pair of earlier Bronze Age barrows, suggesting that the site had been in use for some time before the earthworks were constructed. Recent excavations have found a levelled area like a platform between the inner and outer earthworks that may date to the even earlier Neolithic era.

Investigation in the 1960s suggested that during the Iron age the earthwork banks would have been topped by a timber palisade. The main entrance was at the south-west, with a gateway approached by a cobbled road surface. According to written records, a causeway led from the entrance to Trekenning, though no trace of this road remains. 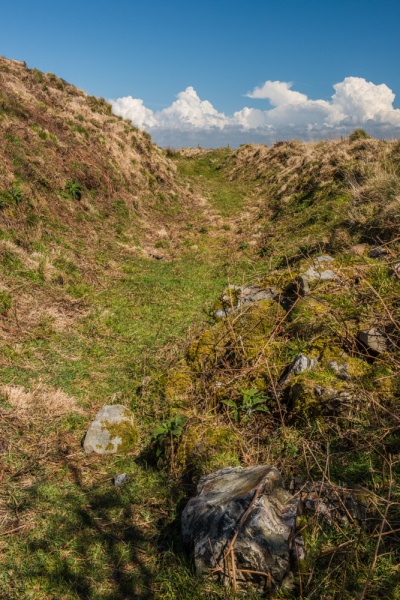 The earthwork banks and ditch

Inside the enclosure is a marshy area, suggesting that there may have been a well to provide water for the inhabitants. There is no evidence of stone hut circles, so if the hillfort was settled for any length of time the inhabitants must have built timber roundhouses which have left no trace.

From 1916-1957 a wolfram mine operated on Castle an Dinas, cutting into the earthwork ramparts. Many of the old mine buildings can still be seen outside the hillfort, and a large marshy area inside the enclosure may point to a mining shaft sunk within the fort itself.

Cornwall is riddled with legends of King Arthur, and Castle an Dinas has its own. According to tradition the hillfort is the burial place of Gorlois, Duke of Cornwall, husband of King Arthur's mother, Ygraine. This tale was first recorded in a history of Cornwall written in 1478 by William of Worcester.

Another tale says that King Arthur himself maintained a hunting lodge at Castle an Dinas, and from here he rode out on the Tregoss Moor hunt. Another story says that an old man claimed to have seen the ghosts of King Arthur's soldiers training within the hillfort.

During the Civil War Royalist soldiers under the command of Sir Ralph Hopton camped within the earthworks for 2 nights in March 1646. Against Hopton's wishes, the soldiers voted to surrender to Parliament. Hopton had no choice but to follow, and surrendered just two days later at Tresillian Bridge near Truro. 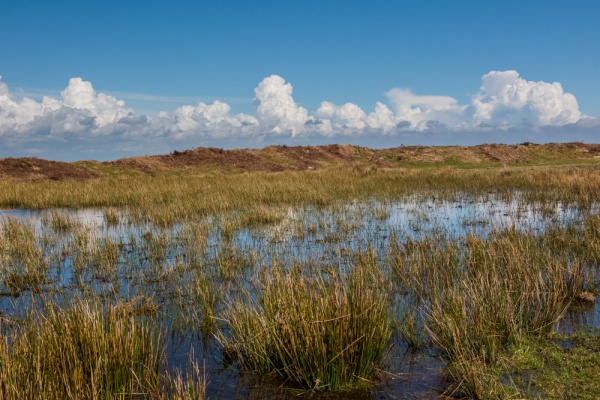 The marshy area, perhaps the site of a well

Murder at Castle an Dinas

The hillfort has seen more than its fair share of drama and dreadful deeds. In 1904 a woman was murdered here by her jealous lover, who then took his own life. Perhaps more dreadful still are the events of 1671, when John Trehenban of St Columb Major confessed to killing two girls. He was sentenced to death, but the manner of his death is striking; he was chained and confined in a cage that was set upon a large rock on the summit of Castle an Dinas and was left there to starve.

According to tradition he hailed a passing woman and begged for food, but all she had were some tallow candles, which he desperately consumed. The candles could only postpone his demise, however, and even today it is said that if you run 50 times around the rock on which the cage stood you will hear Trehenban rattle his chains.

Castle an Dinas is still in use today. The Old Cornwall Society holds an annual midsummer bonfire at the summit of the hill.

Castle an Dinas has been in the care of the Cornwall Heritage Trust since 1988. There is a dedicated parking area at the end of a lane reached by minor roads off the A39. There are very good information panels that explain the layout of the site and its history. 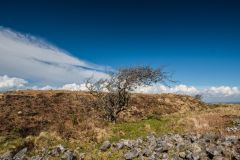 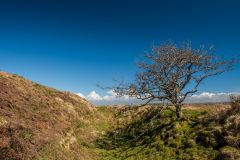 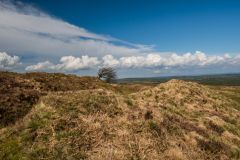 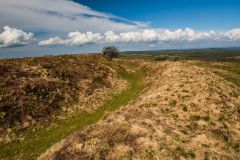 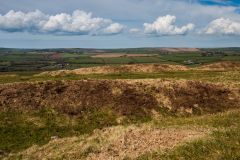 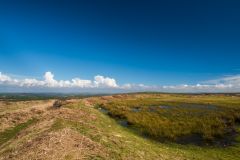 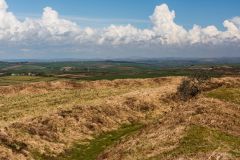 More self catering near Castle an Dinas Hillfort

More bed and breakfasts near Castle an Dinas Hillfort