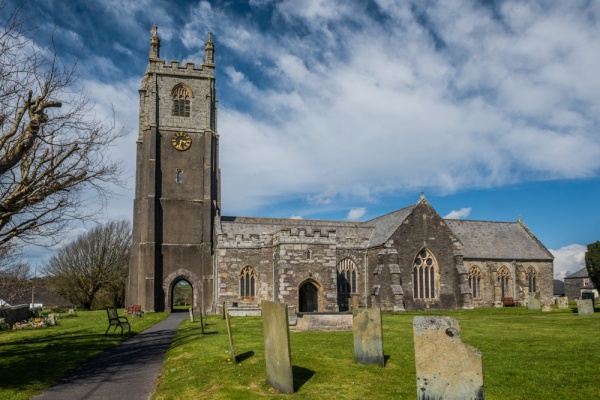 There are two St Columba's, one male and one female. The medieval parish church of St Columb Major is dedicated to the female saint, also known as St Columba the Virgin, a late 5th-century woman and native of Scotland who was killed at Ruthvoes, in the parish.

As with many early Cornish saints, it is hard to separate fact from fiction, but it seems that Columba was born in Lothian, Scotland, in the very late 5th century. According to tradition, she was a princess, the daughter of King Lodan and Queen Manigild, both of whom were pagan.

She converted to Christianity when the Holy Ghost appeared to her in the form of a dove. Not coincidentally the Latin word for dove is Columba. 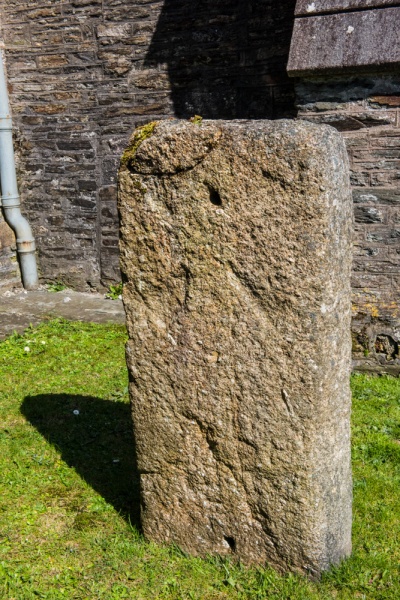 Her parents wanted Columba to marry a pagan prince but she refused, and took flight in a boat to Cornwall, where she landed near Porth, on the outskirts of what is now Newquay. The rejected prince followed her, and caught up at Ruthvoes, two miles south of St Columb Major, where he cut off her head. A spring burst from the ground where Columba's blood fell. The water flowed along the course of her flight and emptied into the sea at Porth.

St Columba is remembered in the name of St Columb Major (the 'major' distinguishes it from the village of St Columb Minor, also named for the saint). The parish church is also dedicated to Columba.

The present church dates to the 14th century and boasts a striking 15th century west tower that rises in four stages to a height of 80 feet. In 1860 the eminent Victorian architect William Butterfield drew up plans to enlarge the church in the hope that it would be named the cathedral for a new diocese of Cornwall. The plans were never executed, for Truro was named as the new diocesan seat. 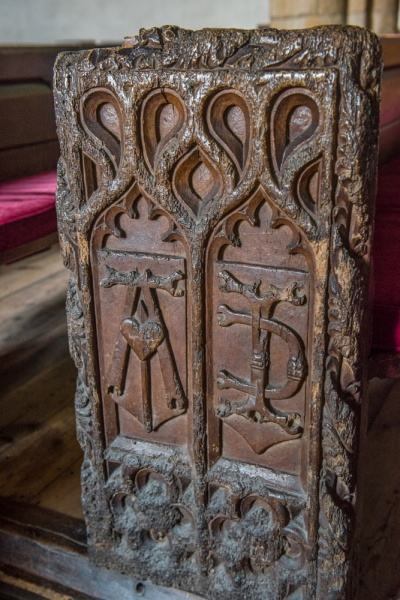 In the churchyard, near the south porch, stands an early Christian wayside cross. You can clearly see the very crude cross carved into the head, and a worn inscription. The cross was later used as a gatepost before it was rescued and reinstalled in the churchyard in the 19th century.

Inside the church is a wonderful collection of memorial brasses to the Arundell family of Laherne, dated to the 16th and 17th century. The Arundells had their own family altar in what is now the south chancel chapel. One of the finest brasses is to sir John Arundell (d. 1545) though Sir John may not have been buried in the church.

One highlight is an exceptional collection of 16th century carved bench ends dated back to 1510. There were originally over 100 bench ends, but only 38 survive. The benches are carved with symbols of The Passion, but other odd carvings can be found, including several grotesque heads. In the south transept is a depiction of Christ's face on a napkin along with three roses growing from a heart.

Look for the Letter of Thanks sent by Charles I to the people of Cornwall in 1643 to thank them for their support during the Civil War. 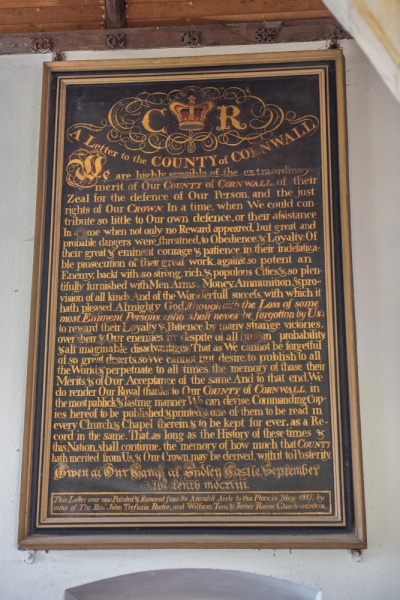 The chancel is an excellent example of early 20th-century style, designed by architect GH Fellowes Prynne. Under the altar is a massive mensa, or altar slab, found under the floor during restoration in 1845. Presumably, it was hidden during the Reformation when such altars were deemed too Catholic.

The north chapel was once a chantry chapel for the guild of the Holy Trinity, which counted among its members the most important men of the area. The chapel is unrestored, and an excellent example of 15th-century work. Several old grave slabs have been gathered in this chapel, including a large tablet to Robert Hoblyn of Nanswhyden.

The south transept, or Jesus Chantry, was used as a private chantry chapel by Sir Emmanuel Esaymus of Tregoose. The Esaymus family paid for a priest to say Mass at least three times a week for the souls of present and past family members. After chantries were suppressed at the Reformation the chapel came back into church care.

St Columba's is a beautiful historic building, full of interest. It is usually open to visitors and was open when we visited. The church stands on one side of the Market Square, near the 15th-century Glebe House. There is a free town car park within easy walking distance. 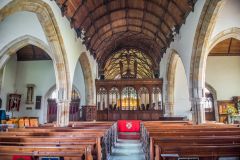 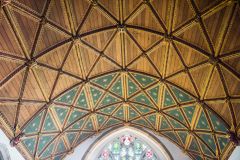