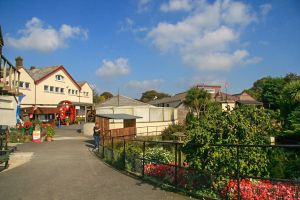 Poldark Mine
Poldark Mike is an important tin mining heritage site offering tours of the historic mine workings and a museum of mining history.

There has been mining activity in the Wendron Valley since prehistoric times. In the 14th century, miners found alluvial deposits (small bits of tin in river beds). The miners first collected tin ore from the rivers, and sometimes worked exposed outcrops. We know that the very first water-powered tin stamping mill in Cornwall was erected here in 1493.

Sometime around 1720 tin streamers working the River Cober discovered a seam of ore containing tin running into the hillside. They followed the deposits into the hillside, digging tunnels deeper and deeper into the earth.

In so doing they may have run into even older tunnels, carved out of the earth with pickaxes during the 17th century before explosives were used. The mine, known as Wheal Roots, continued to be worked until around 1780 until it fell out of use.

Tin was removed by a system of buckets powered by horses turning a large wheel on the surface with a long rope attached. In 1856 the Wendron Consols Mine incorporated the old miners' tunnels. When the mining stopped the old tunnels were forgotten.

And so they would have remained but for a series of coincidences. In 1972 a retired Royal Marine named Peter Young bought an old forge at auction. He stored the forge on a plot of wasteland, and opened it to the public as Wendron Forge, along with his expanding collection of old steam engines.

The old mine workings were renamed Halfpenny Mine and opened as a heritage attraction. A few years later the popularity of the TV series 'Poldark', based on the series of books by Winston Graham, convinced the owners to rename the mine again, calling it Poldark Mine. Not only were the mines renamed for the Poldark series, but some of the filming also took place here. Winston Graham developed an interest in the mine and even launched the final volume of his book series here in 2002.

The mines have been developed into a modern visitor attraction that brings to life the long heritage of Cornish tin mining. The Mine is composed of two main parts; the historic underground tunnels, and an above-ground open-air museum and garden.

Exhibits trace the history of mining, with old workshops and open-air engines, a working water wheel, as well as an 1850 beam engine. The machines, many still in working order, are scattered throughout an attractive garden area. A museum houses historic mining artefacts from across Cornwall, but with an emphasis on Poldark.

The above-ground experience of industrial heritage would be reason enough to visit Poldark on its own, but the real highlight of visiting is a guided tour of the historic tunnels. The tour takes you 100 feet under the surface, through narrow passages, while guides explain the history of the site and the hard life of the miners. One of the unusual features at Poldark is an underground post box, where you can send specially stamped cards and letters.

There are 3-4 tours each day. Please check the official website for current tour times and booking information. The mine is part of the Cornish Mining World Heritage Site.

Nearest Accommodation to Poldark Mine:

More self catering near Poldark Mine >>

More Hotels near Poldark Mine >>

More bed and breakfasts near Poldark Mine >>