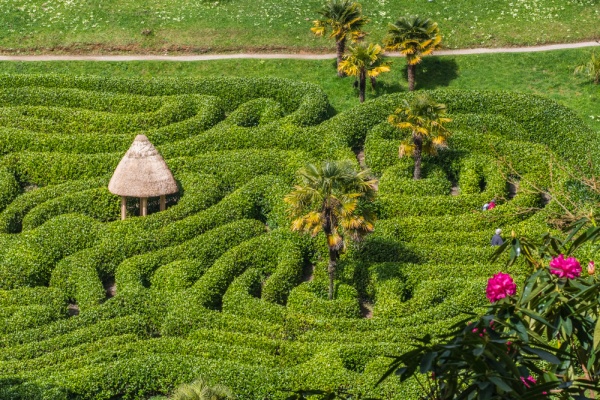 Glendurgan is a subtropical garden set above the Helford estuary. Exotic flowers, shrubs, and trees flourish in this sheltered valley location. The massive laurel maze is a sure hit with younger visitors!

In 1820 the entire Glendurgan valley was purchased by Alfred Fox. Over the following 2 decades, Fox developed the valley site into one Cornwall's most intriguing gardens, a semi-tropical paradise where ferns and palms thrive in the warm, mild micro-climate.

The Fox family put a lot of attention into Glendurgan's orchards; by the mid-19th century the orchards were home to 78 different varieties of apple, plus nectarines, peaches, and other varieties of fruit. The gardens were enhanced by George Henry Fox, who inherited the Glendurgan estate in 1890. The Fox's were Quakers, and Glendurgan was created to be 'heaven on earth'; a reminder of their Quaker values. 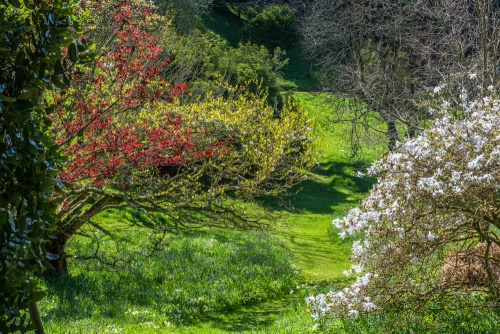 The highlight of Glendurgan is the laurel maze, designed by Fox in 1833. The maze is designed to resemble a coiled serpent curled on the lawn. The design is said to be modelled on Sydney Gardens in Bath, and has a Victorian thatched summerhouse at the centre.

Fox wanted the maze to be much more than a decorative feature in his garden; he wanted it to be a challenge! The serpent's coils stretch for .75 mile spiralling inward in ever-tightening coils.

Navigating the maze can be distinctly awkward - as I can attest - but the sloping site offers a vantage point overlooking the maze, so onlookers can call out directions to puzzled maze-goers. There is a viewpoint on the hillside above the maze, and surrounding trees create a colourful 'window' to look down on the complicated serpentine shape, especially in spring when the azaleas and rhododendron are in bloom. 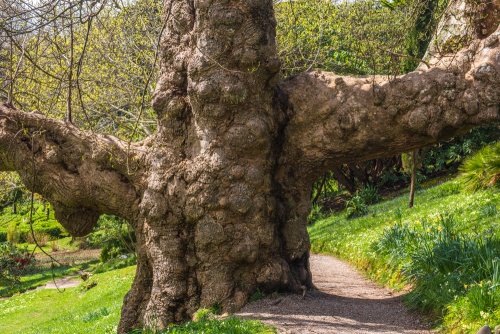 A huge tree on the upper garden path

The gardens are at their colourful best in the Spring, when camellias and rhododendrons burst into colour, standing out sharply against the deep, rich greenery. Fern trees and bamboo help define garden areas and trails winds along circuitous routes through the valley.

The summer turns Glendurgan into a rainforest environment, with a rainbow of colours and rich green foliage. It is almost like walking through a prehistoric land of gigantic plants, a land forgotten by time.

The steep valley drops down to the picturesque village of Durgan on the shore, with views to Helford across the river. One historic highlight at Durgan is a recently restored schoolhouse made of thatch and cob. You can take a ferry from Durgan to Helford village.

Highlight areas of the garden include the Camelia Walk and Cherry Orchard. There are old tulip trees, and a mix of persimmon, aloes, and oleasters. On the west side of the site is a recently developed bog garden, while a special themed 'Holy Corner' garden features plants associated with the Bible. Here you can see such diverse species as a Judas tree sharing space with a tree of heaven, olive tree, and a tree of thorns.

The neighbouring estate is Trebah, another of Cornwall's most famous gardens, with 25 acres of sub-tropical gardens. 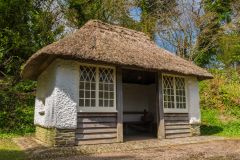 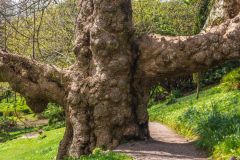 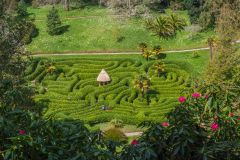 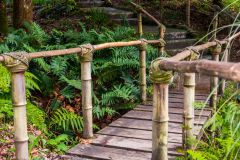 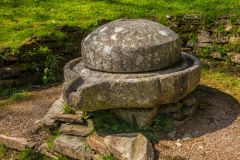 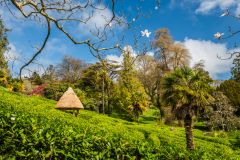 More self catering near Glendurgan Gardens >>