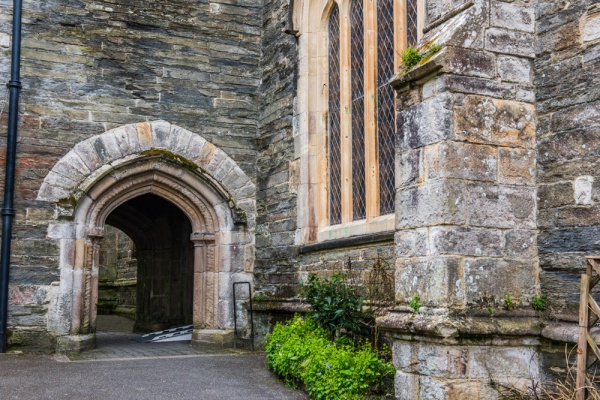 The tower entrance of Fowey Church

Near the picturesque harbour in the old port town of Fowey stands one of the town's most fascinating historic buildings, the parish church of St Fimbarrus.

Who was Fimbarrus? There is a great deal of confusion about Fimbarrus, but one possibility is that he was identical with Finnbarr, an Irish missionary and first Bishop of Cork. Another theory is that Finnbarr has been confused with St Barry, who was possibly a servant of St Neot.

What connection does an Irish Bishop have with Fowey?

Finnbarr/Fimbarrus is known to have journeyed several times to Rome. One frequent route for travellers from Ireland was through Wales, across the Bristol Channel to Padstow, up the River Camel to Bodmin Moor, across the Moor, and down the course of the River Fowey, where they could take ship across the Channel to France.

If Fimbarrus followed this common route he could easily have built a timber church by the harbour, and perhaps even left a follower to tend the church and spread the Christian message. The route from Padstow to Fowey is known as The Saints’ Way, and was used by cattle drovers as well as pilgrims, and is now a popular walking route. 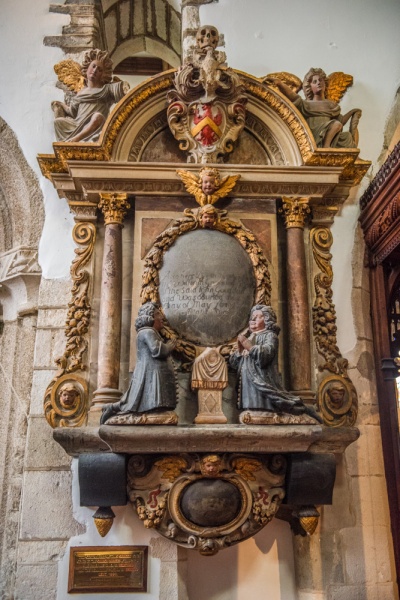 A tradition going back to at least 1478 says that Fimbarrus was buried at Fowey, though there are contradictory stories that he was, in fact, buried in Cork, which would make more sense.

Whatever the origins of Fimbarrus, we know that there was a stone church here in the Norman period, begun around 1150. The church was granted to the Benedictine Priory at Tywardreath in 1180. The Norman church was rebuilt in 1336, when a clerestory was added - a rare feature in medieval Cornish churches.

One of the surviving features from the earlier church is the beautifully carved 11th-12th century font, with a round bowl carved with decorative patterns of honeysuckle leaves. The rim is carved with a star pattern, but the pattern is unfinished, suggesting that the stone-carver died before it could be finished. The font is carved from Catacleuse stone and is set on a modern base.

During the 13th-15th centuries, Fowey was a haven for pirates who preyed upon shipping in the Channel. In 1457 the town was attacked by a force of French soldiers, determined to strike a blow at these Cornish marauders. The French ransacked the town before they were repulsed at the manor house called Place, near the church.

The most commonly told story about the attack is that the owner of Place, Elizabeth Treffry, had molten lead poured over the French as they tried to break into the house. The French retreated, but not before they had severely damaged the church. 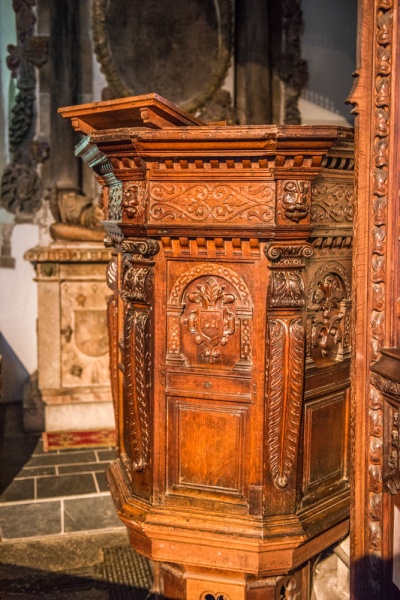 Rebuilding began in 1465 under the patronage of Richard Beauchamp, Earl of Warwick, known to history as Warwick the Kingmaker. The Warwick symbol of the ragged staff can be seen in several places around the church, notable on the west tower, which was completed by 1471, the year in which the Earl died in combat at the Battle of Barnet. The tower is the second-highest in Cornwall. In the tower is a clock mechanism installed in 1620.

Fowey was occupied by Parliamentarian troops during the Civil War. Remarkably, the church emerged undamaged, where so many other churches were damaged. St Fimbarrus might have been spared through the efforts of Hugh Peter, a native of Fowey and later to become one of the founders of Harvard University in America.

You enter the church through the south porch, added around 1506. Look up as you pass through the porch and you will see a very finely vaulted roof with a carved central boss. The south doorway features carved capitals with designs of foliage and heraldic symbols.

On the south side of the porch is an old gravestone to Thomas and Elizabeth Treffry, and the base of an ancient font, older than the ornate Norman font inside the church. The bowl is carved with figures of Jonah and the whale and an arcade design. Stairs lead to a parvise; a small chamber over the porch that was probably used as living quarters by visiting monks from Tywardreath Priory. 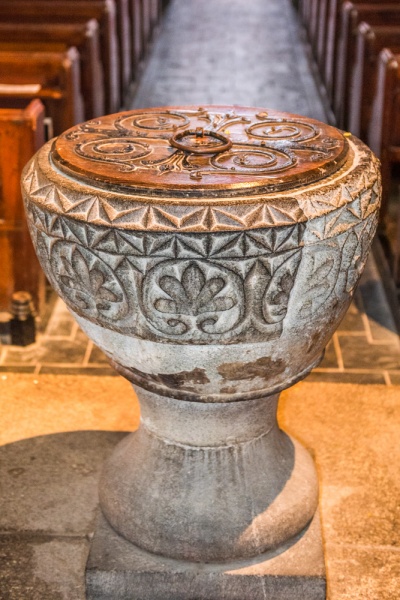 Historic highlights inside the church include the beautifully carved pulpit, said to have been built in 1601 with wood from a captured Spanish galleon. look up to enjoy the 500 year old wagon roof, with finely carved bosses and angels that look like they have stepped out of a Tudor portrait.

There are numerous memorials to prominent local families such as the Treffry family of Place. One of the best is an impressive 1684 wall monument to John Treffry, carved with a florid epitaph reading:

Here in this chancel I do lie,
Known by the name of John Treffry
Being made and born for to die
So thou must friend as well as I.
Therefore good works be sure to try
But chiefly love and charity
And still on them with faith reply
So be happy eternally

Over this is a plaque to the memory of an earlier John Treffry who fought with the Black Prince at the Battle of Poitiers in 1356 and captured the French royal standard, for which he received the rare honour of being knighted on the battlefield.

Even more grandiose is the alabaster memorial to John Rashleigh in the north aisle. Rashleigh is shown lying in his cap and gown, while beside his effigy is the kneeling figure of his son John the younger. Rashleigh sailed with Sir Francis Drake in the fight against the Spanish Armada, captaining a boat paid for by the inhabitants of Fowey. In the floor are two brasses to members of the Rashleigh family, including Robert Rashleigh of Coombe and Alice Rashleigh, wife of John, who died in 1591.

In the tower is a fascinating 18th-century' ringers board' depicting bell-ringers in period costume.

Over the south door is a painted board depicting Charles I's message of thanks to the people of Cornwall in 1643.

The church is usually open to visitors and was open when we visited, even though we arrived very late in the day, as the sun was setting. 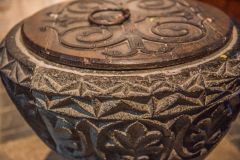 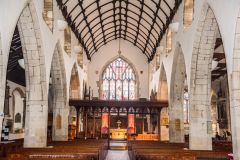 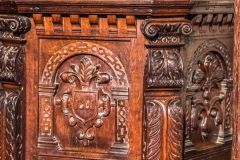 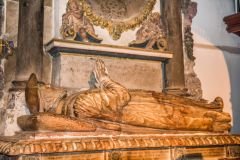 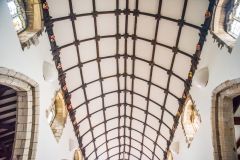 Self Catering near Fowey