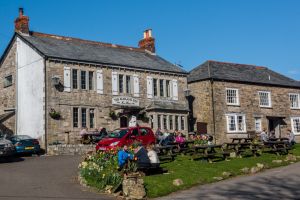 An attractive, small village near Bodmin, Cornwall, with an award-winning pub sitting across a green from a lovely Norman church. The church has a 15th-century tower and transepts, and a Jacobean pulpit. There is excellent access to Bodmin Moor, and the stately home of Pencarrow House is just 4 miles distant.

The church was begun in the 12th century, but there is a mystery attached to the dedication. There is no historical record of any dedication at all. The name 'St Protus and St Hyacinth' is based solely on local tradition.

The pair of saints were 3rd-century brothers, martyred for their Christian beliefs, and are known locally as 'Pratt and Hatt'. The highlight inside the church is a 15th-century barrel-vaulted roof, decorated with painted bosses and carvings of angels.

Blisland is somewhat unusual in that it has a village green, something that most Cornish villages do not. On the edge of the village is the Blisland Inn, a former winner of the CAMRA National Pub of the Year. People come from 30 miles away to visit the Blisland Inn, with its oak-aged ciders and beers.

Just outside the village is a holy well and ancient cross dedicated to St Pratt (Protus). The most interesting historic buildings include Blisland Manor House, built in the 16th century and a very nice example of a Tudor manor with some later additions. Lavethan House is even earlier, with parts of a 15th-century house incorporated in a 17th-century rebuilding.

Outside the village are several prehistoric sites, including the Stripple Stones, a circular henge monument dating to the Neolithic period. Fourteen stone remain inside an earthwork henge. A much more recent point of interest is Jubilee Rock, one mile to the north of Blisland. The rock face was inscribed and painted with the royal coat of arms in honour of George III's 50th year on the throne in 1809. 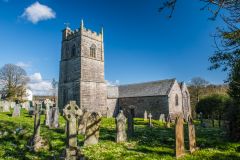 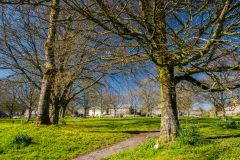 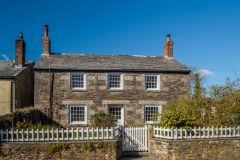 More self catering near Blisland >>

More bed and breakfasts near Blisland >>