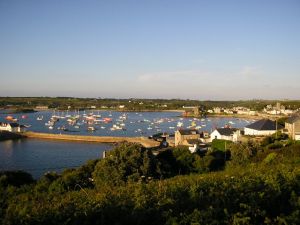 The Isles of Scilly are the most easterly part of England and are often overlooked by visitors. That's a shame, for the islands that make up the Scillies abound in beautiful beaches, stunning coastal scenery, and the remains of prehistoric settlement.

The climate also encourages plant growth, and the islands boast several top-notch gardens to visit. Bird-watchers love the Scillies as well, with numerous migrant species making the islands a regular stopover point on their travels.

The Scillies were settled as early as the Stone Age, and there are ancient sites galore to explore. It seems possible that the islands were originally one large island that was flooded by rising sea levels around AD 400, giving us the 5 large islands and over 50 smaller islets we see today. Remains of ancient stone-walled field boundaries can still be glimpsed below the tide line of some islands.

The Scillies were Christianised very early, with a pair of exiled Bishops of the Priscillianism sect said to have settled here in the 4th century. Around AD 986 the Norse king Olaf I was converted to Christianity after meeting with a Christian seer on Scilly.

The islands came under the control of the English crown in the reign of Athelstan, and later Henry I granted a group of islands to Tavistock Abbey, though the monks later petitioned to exchange their estates for property on the mainland.

The islands changed hands several times during the English Civil War. In 1651 Admiral Blake captured the Scillies for Parliament. as part of Blake's attack, he built a battery on Tresco aiming across to St Mary's. You can still see remnants of Blake's battery. Parliamentary forces built Cromwell's Castle on Tresco, using material from a 1550 gun platform incorrectly called King Charles's Castle.

The Scillies have always posed a hazard for shipping, and the islands are a graveyard for sailing vessels. The worst disaster in the islands' history came in 1707 when 4 ships of the Royal Navy were driven onto the rocks and over 1450 men were killed, including Admiral Sir Cloudesley Shovel.

A community garden in the heart of St Mary's. The gardens cover 1.5 acres of an old quarry pit, providing a habitat for subtropical plants. Free entry. 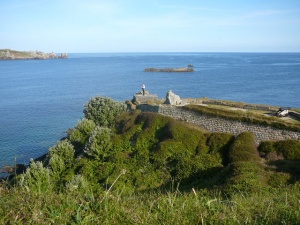 Sometimes known as Telegraph Tower, this cylindrical building was built at the height of the Napoleonic Wars, between 1790-1815. The tower stands 12 metres high and was built to hold a 32 pounder gun on the top platform and house a garrison of 8-10 men.

The tower was adapted for use as a signal station and it was here in 1898 that Marconi heard the first telegraph signal from Porthcurno. Telegraph is just one of 3 towers built to defend the islands against French invasion. The others are Buzza Tower and Lloyds Tower, both of which still stand.

Harry's Walls is an incomplete artillery fort begun in 1551 overlooking St Mary's harbour. The name suggests an association with Henry VIII, but the fort was built in the reign of Henry's heir, Edward VI. The fort was intended to protect Hugh Town and its harbour.

Before the fort was completed the builders changed their minds and determined that the headland now known as The Garrison offered a better site and work on Harry's Walls was abandoned. Though never finished, the fort was one of the first English fortifications to use arrow-headed bastions to foil artillery attacks. The Garrison headland is home to Star Castle, built when Harry's Walls were abandoned.

The name of this fort at New Grimsby comes from the fact that it was captured by Royalist forces in 1651. Despite the name, the fort was actually built a century earlier, in the reign of Edward VI. Another 16th-century gun tower called Old Block Tower still stands at Old Grimsby.

Located near McFarland's Down, this Bronze Age burial site features a central passage leading to an inner chamber. The passage is oriented on the line of the midsummer solstice and is aligned with the standing stone known as Long Rock.

Located just down the hillside from Bant's Carn, this Iron Age site is set in a picturesque location overlooking the coast. The Iron Age structures were built over an earlier Bronze Age settlement. There is a large courtyard house and smaller, interconnected oval huts. The site was probably occupied over a period of 5 centuries.

Avid birdwatchers know all about the Scillies! Because of its location off the south-west corner of England, the islands are usually the first stopping place for migrating birds, especially rare species from Siberia and North America. The high season for birdwatchers is October.

Tresco is operated as a timeshare resort, so most visitors go to St Mary's, which has a large array of holiday accommodation and facilities. The islands of St Martin's and Byher are quieter and each boasts a hotel. St Agnes has no hotel and is the quietest island.

Access to the Scillies is by air from Lands End, Newquay, and Exeter, or by ferry boat from Penzance. Regular boat services run between the islands. 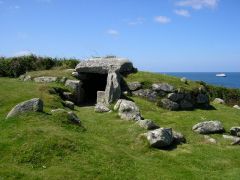 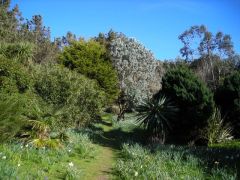 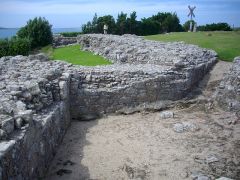 Nearest Accommodation to Isles of Scilly:

More self catering near Isles of Scilly >>

More Hotels near Isles of Scilly >>

More bed and breakfasts near Isles of Scilly >>