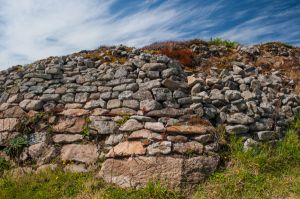 A prehistoric burial site in a marvellous clifftop location, Ballowall was used throughout the Neolithic and Middle Bronze Age. The cairn, which is 67 feet in diameter, was concealed for many years beneath the spoilage of tin mining, but when finally excavated in 1878 revealed that the site was based around a round chambered cairn, entered by a covered gallery about 11 feet long.

Fragments of cremated bones and Bronze Age pottery was found beneath the passage floor. An unrelated burial cist is close to the entry gallery. At the centre of the cairn are four small ground-level cists, and a Bronze Age urn was found in one of the cists. A cist high in the mound contained a Roman coin, suggesting that the site was reused during the Roman period.

Finds excavated from Ballowall Barrow are kept in the museums at Truro and Cambridge, and the British Museum in London.

Ballowall is just one of the numerous prehistoric burial sites along the West Penwith coast. Like many others in this area, it is composed of a high central mound surrounded by a wide outer mound. The inner mound, which originally rose to 4.5 metres high, was supported by two concentric drystone walls.

The site was first excavated by William Borlase (1848-1899), who was responsible for excavating a number of prehistoric Cornish sites. Archaeology must have run in Borlase's genes, for he was a descendant of the 18th-century antiquarian William Borlase.

The burial site is immediately off the Carn Gloose road, accessed from the western edge of St Just. The barrow is sited just before the road ends at the cliffs, just below an old tin mining stack. There is a picnic table and a wide place to pull off the road. The cairn is not well signposted; indeed the only signage I found was a small information panel beside the site. There are no brown tourist signs that I could see.

You can also access the site from either Cat Valley or the National Trust's Cape Cornwall parking area, and then follow the coastal path. It's a lovely walk in either direction, about 20 minutes through a wonderfully scenic area, with old mine pits lining the cliffs.

The walk from Cat Valley is less crowded and arguably prettier. A note to the very kind man at Cape Cornwall who directed me to Cat Valley - the burial mound is NOT located down that road, but down Carn Gloose road! 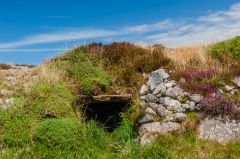 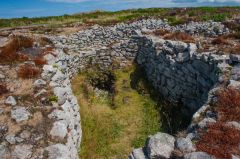 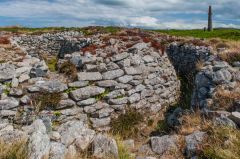 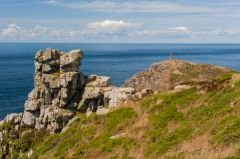 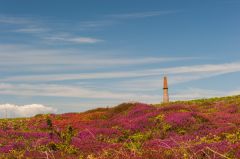 More self catering near Ballowall Barrow >>