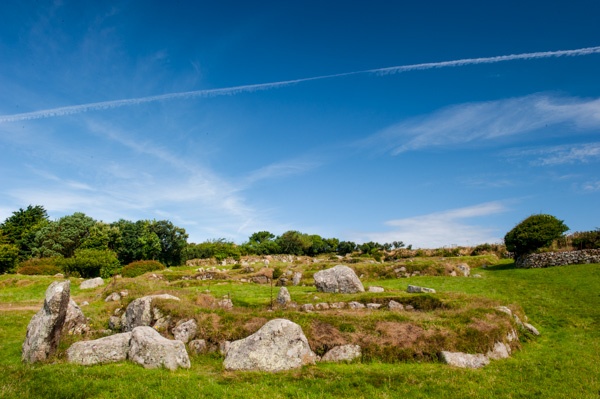 There are a number of so-called 'ancient villages' in the southwest of England. Perhaps the most well known is Chysauster, but just a short distance away from Chysauster is Carn Euny, one of the best-preserved village sites in Cornwall. The village was occupied from the Iron Age to the late Roman period, and the remains include stone foundations of domestic buildings and an underground passage of the type known as a fogou.

The site was built in three distinct phases, beginning in the 5th century BCE. It may have been settled by the Bronze Age, but most of the finds on the site come from the Iron Age and Roman periods. It is built on the south slope of Carn Brane hill, at the top of which is an Iron Age hillfort.

The fogou is one of the best-preserved in Cornwall and is unique in that the central chamber is round, of the sort known as beehive construction. The underground passage runs for 66 feet to a round chamber made of granite blocks, corbelled to a roof opening that is exposed to the sky above. The passage is from 5.5 to 6.5 feet high and 6-7 feet wide. It has walls of granite blocks, with slabs of granite laid across the passage to form a roof.

The fogou was built in three phases. The first phase occurred in the 5th century BCE with the building of the corbelled chamber and passage. The final phase of activity was in the 1st century AD.

The earliest evidence of houses on the site comes from the 1st century BCE. These were simple timber structures with turf walls. In the mid 1st century AD the first stone houses were built on the site. There are two types of stone-built huts; the first is courtyard houses, about 30 feet across, and irregular in shape. The others are smaller, only 20 feet across, and roughly circular. 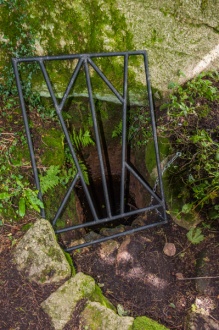 Among the items found when the site was excavated were quern stones, whet-stones, flint tools, an iron spearhead, and pottery.

The name of the site is intriguing. It possibly refers to a nearby rock outcrop, which in itself was named for a 5th-century Irish abbot.

Immediately beside the ancient village site are a pair of holy wells. The easiest way to access the wells is to walk to the top left of the site (facing uphill), where an information board is sited. A few paces from the information board a path leads from Carn Euny, passing close to a private cottage hidden amongst the trees.

To the right of this path is a holy well, with worn stone steps going down into the earth, guarded by very large boulders and a modern iron grate to prevent anyone from slipping in. You can easily view into the well, though. There is supposed to be a second holy well very close to the first, but I was unable to find this and didn't want to trespass on private land in search of it! 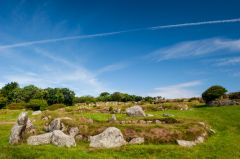 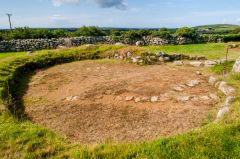 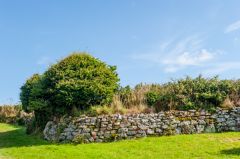 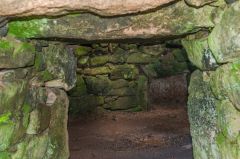 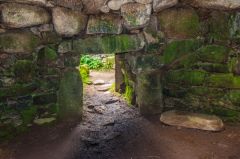 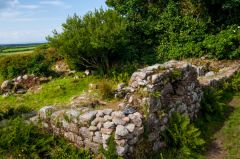