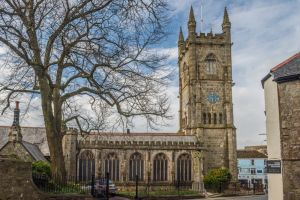 One of the largest towns in Cornwall, St Austell is an excellent centre for holidays in south Cornwall. Like many Cornish towns, St Austell's economy was based around tin mining for many years, but the discovery of china clay here turned St Austell into one of the world's largest suppliers of the mineral.

The spoil heaps from the mining of china clay created a surreal landscape of white hills known as the 'Cornish Alps'.

The china clay industry owed its existence to one man, a chemist named William Cookworthy, who discovered deposits of kaolin in the St Austell area. Kaolin, or china clay, was used to produce porcelain, as well as petrochemicals and textiles. The history of china clay production is traced in the Wheal Martyn China Clay Museum, based in a historic 19th-century kaolin works.

Only two miles away is the Eden Project, a huge biodiversity project that is now the most popular tourist attraction in Cornwall.

The first church at St Austell was founded in the Celtic period. In 1150 that church was granted to the Priory of Tywardreath by the Cardinham family.

In 1196 a new building was erected at the top of Fore Street, dedicated to St Austol. The oldest part of the present building dates to around AD 1290, but much of the building we see today is 15th century. The best historical features are a Norman font and a beautifully crafted wagon roof decorated with ornately carved bosses. The exterior of the church is decorated with groups of statues set into niches.

Beside the church is The Mengu Stone, an ancient boundary marker which formerly stood at the junction of the three main roads leading into St Austell. The stone marked the boundaries of three ancient manors of Trenance, Treverbyn and Tewington. It was used as a meeting place and a point to sell stray livestock that had not been reclaimed. John Wesley is said to have preached from the Mengu Stone.

Another historic place of worship is a Friends Meeting House (Quakers) built in Italianate style in 1829. A more modern building is the striking Masonic Hall, built in 1900.

Though Holy Trinity has been a St Austell landmark for centuries it is perhaps another building that is the most recognisable symbol of the town; Market House was built in Italian Renaissance style in 1844. The upper floor initially served as the town hall, and over the last 150 years the Market Hall has been home to a fire station, a courthouse, and a cinema.

At Menacuddle, on the outskirts of St Austell, is an ancient holy well, on the west side of the B3274 (Bodmin Road). The word Menacuddle comes from a combination of the Cornish 'mena', meaning a sanctuary, and 'St Guidel, a Cornish saint about whom nothing is known. So the name Menacuddle suggests an origin as St Guidel's sanctuary, or hermitage. The well itself is covered by a very simple 15th-century wellhead.

The White Hart Hotel on Church Street once boasted a panoramic wallpaper painted by the famed Dufour company of France, depicting the Bay of Naples. The wallpaper is now held in the Victoria and Albert Museum in London.

St Austell is closely linked to the coastal port of Charlestown, where you will find the Shipwreck & Heritage Centre. Charlestown's picturesque harbour was used in the filming of the Poldark TV series.

Our family quite enjoyed following the town heritage trail, with locations around the trail marked with a QR symbol, so you can point your smartphone at the sign and launch an app with more information about the location.

Just outside St Austell is the Eden Project, one of the most popular visitor attractions in Cornwall. The Eden Project is based around three huge bio-domes, housing plants from around the world as examples of diverse ecosystems and how humans interact with and affect the natural world. 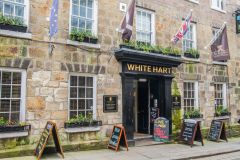 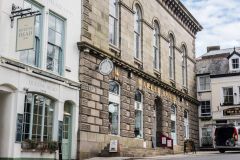 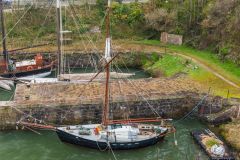 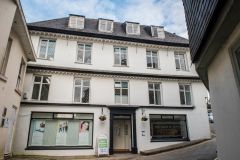 More self catering near St Austell >>