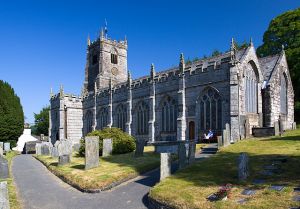 Set in a wooded valley, St Neot is worth visiting for its medieval parish church, which boasts superb stained glass windows from the 15th and 16th centuries. Just outside the village is a holy well dedicated to St Neot.

At the time of the Norman Conquest, there was a college of priests at St Neots. Much of the land owned by the college was seized by the Normans after the Conquest. The village was mentioned in the Domesday Book of 1086 when it was held by Bishop Odo, half-brother of William the Conqueror. At that time there were just 3 villeins and 6 smallholders, so it must have been a fairly small place.

St Neot supported King Charles in the Civil War. To commemorate the Royalist connection a ceremony evolved where each Oak Apple Day (29 May) an oak branch is lifted to the top of the church tower. The branch recalls the occasion when Charles II hid in an oak tree following the Battle of Worcester in 1651.

Who was St Neot?

The village is named for Neot, a 9th-century monk. Neot left a career as a soldier for the church, first serving at Glastonbury Abbey in Somerset, but later leaving the monastery and settling as a hermit in Cornwall. He was later joined by other monks and gained a reputation by caring for the poor. Neot's reputation spread, and King Alfred visited him to receive counsel. The story of Alfred burning the cakes comes from a later book on the life of Neot.

When Neot died around AD 870 his bones were preserved, and people visited his shrine. Then in AD 980, a monastery was founded at Eynesbury in Huntingdonshire (modern Cambridgeshire), dedicated to the saint. The monks retrieved the saint's body from St Neot and carried it off to Cambridgeshire.

One version of the story says that the monks were pursued by angry Cornishmen, upset at the loss of their saint. Neot's relics made the abbey a destination for pilgrims during the medieval period, but his bones were scattered during the Dissolution of the Monasteries.

The parish church of St Neot is dedicated to St Anietus, possibly because the saint was confused with Neot. Anietus was a Celtic holy man who lived here in the 5th or 6th centuries and established the nearby holy well. The first church on this site was built in the late Saxon period, probably as part of a small monastery. The present building was begun in 1425.

The main historical interest here is a superb collection of original 15th-century stained glass. There are 16 windows containing 15th and 16th-century glass, with subjects ranging from the Last Supper to the life of St Neot. A number of windows bear coats of arms to local families such as the Martyn, Borlase, and Hedgelands.

In the churchyard stand 3 weathered Celtic wayside crosses and an intricately carved churchyard cross-shaft dated to the 10th century. The cross shaft, with a four-holed head, is known locally as the St Neot Stone. All 4 sides of the shaft are covered in traditional Celtic interlace carvings.

About 300 yards from the church is an ancient spring, said to be the one used by Anietus. This is where things get confusing, for stories about Neot and Anietus have been interwoven, so that you will often find the well referred to as being founded by Neot. Just to be clear, Anietus was a Celtic saint said to have established the well in the 6th century. Neot was a much later inhabitant who lived in the 9th century.

According to legend, 3 fish lived in the well. An angel told Anietus/Neot that he could eat one fish per day, and the number would never decrease.

Unfortunately, the saint fell ill, and his servant, thinking to help his master heal, cooked 2 fish. Anietus prayed for forgiveness, and had the cooked fish put back in the well. As soon as they entered the water the fish returned to life and began to swim. There are no fish to be seen today, just a small wellhead covering the source of the water.

The wellhead was restored by the Grylls family in 1852, when a large cross over the doorway was added. Inside an old oak door are 2 steps leading down to the water. Apart from the church and the holy well, another historically interesting building is the London Inn, a stop for travellers on the road to London.

Look for the 18th-century bridge across the river on Trip Hill.

Note
Do not confuse the village of St Neot in Cornwall with the town of St Neots in Cambridgeshire! 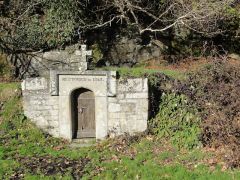 More self catering near St Neot >>