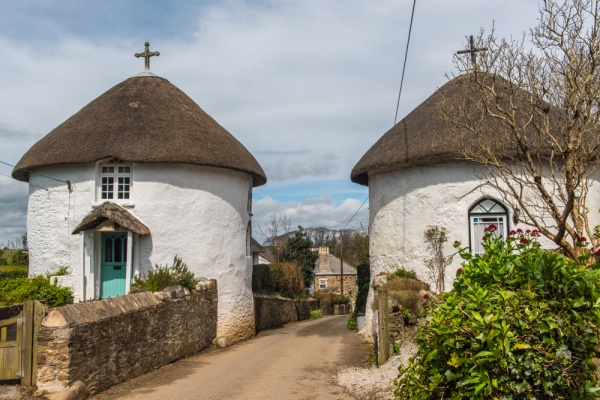 A pair of the famous Veryan thatched roundhouses

Veryan is a small village in the Roseland district of south Cornwall, close to Truro, with good access to Carne Beach, Pendower Beach, and the beaches at East and West Portholland. Just outside Veryan is Carne Beacon, one of the largest Bronze Age burial mounds in England.

The parish church of St Symphorian is mostly Norman, but it boasts a Celtic cross. It is dedicated to a French martyr, and the first priests were sent from the mother church in France. Some Norman features remain, including a pair of carved faces set into the west porch.

It is possible that the carving was not original to the church but brought here from a ruined chapel at Grampound by a Victorian vicar. The doorway arches and tower are original Norman features, and there is a finely carved early medieval font with grotesque faces at each corner.

Perhaps the most interesting memorial is to John Trevanion, the 13-year-old son of the Governor of Pendennis Castle, who died in 1712. In the churchyard is a memorial to the 19 crewmen of the Hera, who died in a wreck off Nare Head in 1914. The Hera gravestone is thought to be the longest in Britain.

The most notable buildings in Veryan are not the church, but the 5 thatched round houses (huts, really) built for workers by Jeremiah 'Parson' Trist around 1815. The houses are of whitewashed cob topped with thatch. The 5 cottages are thought to have been built to honour Trist's 5 daughters.

A local tradition says that the houses were built to a round plan so that there were no corners for the Devil to hide in, but there is no evidence that Parson Trist made his design decision based on the story! The most likely explanation is that the round houses were simply less costly.

On the outskirts of Veryan is Melinsey Mill, a restored 16th-century water mill. Records show that there has been a mill on this site since 1210. The present mill building was erected in 1565. The mill is driven by a 16 foot cast iron wheel installed in 1882. Aside from the historic milling equipment the mill now offers arts and crafts for sale, as well as refreshments.

The local pub is The New Inn, which may have been new in the 16th century when it was built, but is now a traditional country inn, with darkened beams and an atmosphere of history. 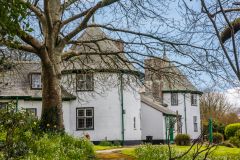 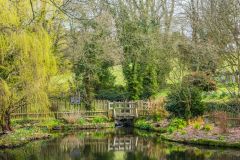 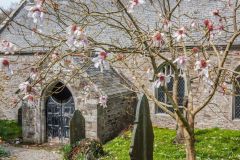 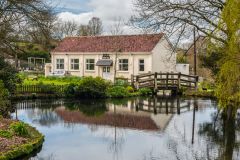 More self catering near Veryan >>

More bed and breakfasts near Veryan >>