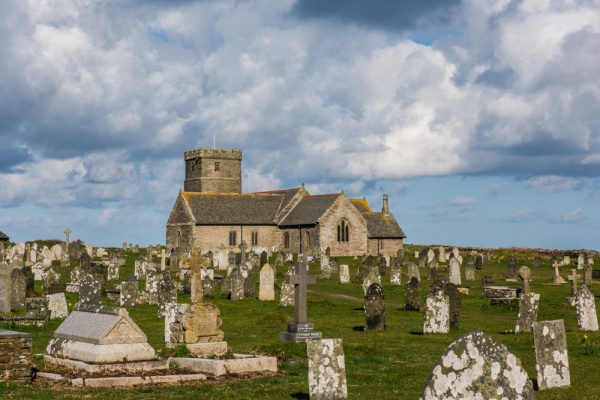 High atop the cliffs overlooking the village of Tintagel stands a historic treasure. No, not the castle for which this rocky Cornish headland is famed, but the 11th-century church of St Materiana.

Little is known of Materiana, but she may equate to Madryn, a 5th-century Princess of Gwent who preached in North Cornwall around the year AD 500. Tintagel church is thought to have been founded as a daughter church of nearby Minster, the only other British church dedicated to Materiana.

The first church was an oratory served by monks from Minster, where the saint is said to have been buried. The oratory was replaced by a Saxon stone church and the site was used heavily as a Christian graveyard over the years 500-700.

There was an early 6th-century church on the clifftops, but the present building dates to the late 11th century, though it incorporates earlier Saxon features. The tower is several centuries later, perhaps a product of the 13th century. The north and south doorways are Norman, while the north porch is 14th century. The north doorway iron hinges are thought to be 12th-century originals 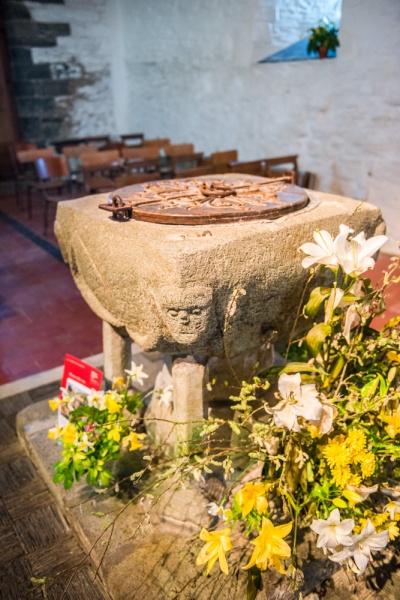 The most ancient historic feature, however, is a Roman milestone dating to the reign of the Emperor Licinius, who died in AD 324 when he was put to death by his rival Constantine. The milestone stands in the south transept, atop a stone bench used for seating before the days of pews and wooden benches. The milestone was discovered built into the churchyard gate in 1889 and moved inside the church for preservation. Another milestone stands outside St Piran's Chapel at Trethevy, a few miles away.

One of the interior highlights is the crudely carved Norman font. Each of the four faces is carved with serpents and at each corner is a grotesque head.

The west window has stained glass panels telling the story of Tintagel, with heraldic shields to church patrons, including Robert of Mortain, first Earl of Cornwall and builder of the present church. 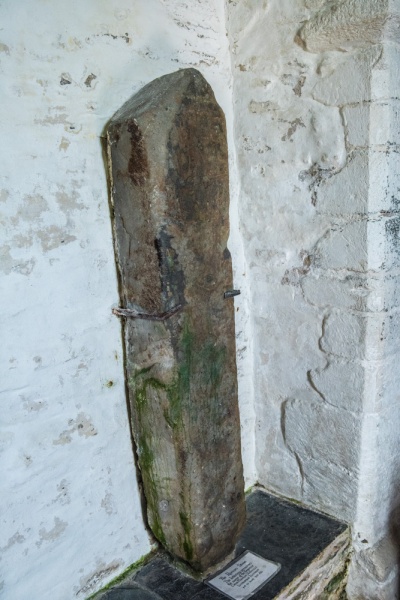 Separating the nave and chancel is the base section of a 15th-century screen. In the chancel beyond is a founder's tomb, set into a recess in the south wall. This probably dates to the 14th century. In the opposite wall, a doorway leads down into a small Lady Chapel, thought to be much older than the chancel.

Inside the Lady Chapel are a late medieval stone altar and the bowl of a medieval font thought to have been brought to the church from the chapel of Tintagel Castle. A local tradition says that the Lady Chapel was originally an anchorite's cell. Its location, linked to the chancel, would support this, but there is no strong evidence to suggest that there was ever an anchorite at Tintagel.

Other highlights include a Tudor bishop's chair and a very long floriated stone coffin lid in the south transept. Behind the high altar is a reredos carved from 15th-century bench ends. The reading chairs are Victorian but are made from medieval carved wooden panels.

There are several noteworthy memorials in the very large churchyard. In the north-west corner is the grave of John Douglas Cook, founder of the Saturday Review, who died in 1868. Nearby is a moving memorial to Domenico Catanese, a 14-year-old boy cabin boy who died in the wreck of the barque Iota at Bossiney cove on 20 December 1893. Catanese was the only member of the crew to perish; the others were rescued by locals. One of the lifebuoys from the Iota has been placed in the south transept as a memorial to the young boy.

The oldest gravestone still in its original place is a memorial to Mary Baron, dated 1689, set at the angle of the chancel and south transept. 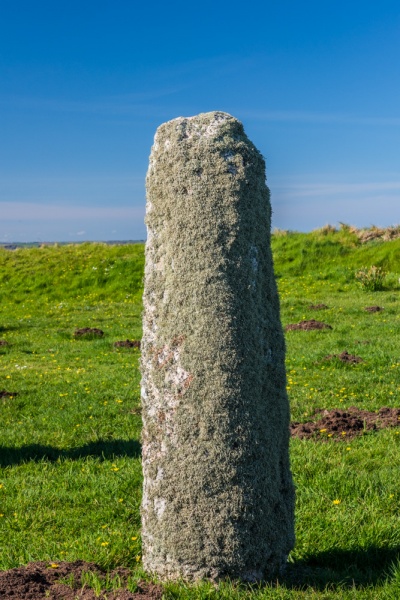 Just west of the church tower is an unusual monument for a churchyard; a Bronze Age standing stone, or 'monolith' as the excellent church guidebook calls it.

Outside the south-west entrance to the churchyard is a small stone tithe barn, and abutting it is a set of mounting blocks used by the vicar and by wealthy church patrons arriving to service on horseback.

Reaching the church is easy. From Fore Street simply follow Vicarage Hill. The road dips steeply down before rising just ad steeply up Church Hill, where you will find the large churchyard. If you are arriving by car there is a parking area outside the churchyard, just be aware that the road is very narrow with limited places to pass. Walking from the village is great exercise and should take no more than 10 minutes.

You can also reach the church by following the coast path from the upper ward of Tintagel Castle. The church is normally open to visitors during daylight hours. I've visited several times and always found it open. The location is fabulous, and the sense of history is palpable. 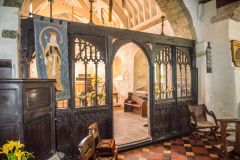 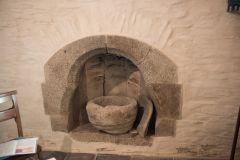