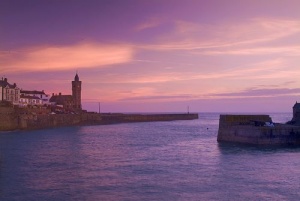 A lovely combination of a holiday resort and fishing port, Porthleven is just southwest of Hayle. The village is built around a lovely port, with an inner harbour protected by a curving breakwater and a baulk gate to keep the ocean waves at bay. Twin cannons face each other across the harbour mouth; these were salvaged from the frigate HMS Anson, which ran aground on Loe Bar in 1807.

The Ship Inn is a 17th-century inn once used by smugglers. Just around the headland from the inn are the remains of the lifeboat house, constructed in 1894. This area is a popular spot for surfers. Around the harbour, a cobbled walk keeps pedestrians at least nominally dry from the effects of the waves which crash against the harbour wall.

The most prominent building in Porthleven is the Bickford-Smith Institute, with its 70 ft high clock tower.

Just east of Porthleven and accessible by a coastal walk is the shingle beach of Loe Bar. The Bar stands between the nature reserve of Loe Pool and the sea. Follow paths inland through the National Trust Penrose estate.

More self catering near Porthleven

More bed and breakfasts near Porthleven

Self Catering near Porthleven