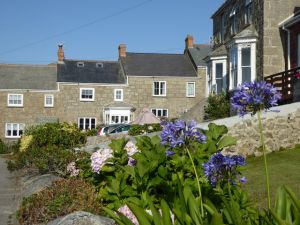 Famous as the westernmost settlement in England, Sennen is located less than a mile northwest of Land's End. The village gives good access to Whitesand Bay, and there is excellent walking to be had along the coast.

The proximity to the most southwesterly point on the British mainland has given an opportunity to local businesses who label themselves as 'The Last xyz in Britain'. The most obvious and popular example is the local pub, which in one direction boasts a sign proclaiming itself to be 'The First Inn in England' and in the other direction is a sign proudly claiming to be the 'Last Inn in England'.

Tucked in behind the inn is the medieval parish church of St Sennen. According to an inscribed stone at the base of the 13th-century font, the church was dedicated in 1441, though the building itself is at least 13th century, and stands on a site that has been in use since the 6th century.

According to legend, Sennen was an Irish missionary who founded many churches along the Cornish coast. He is said to have founded the church at Sennen around AD 520.

Sennen Cove is a historic fishing village with a small working harbour and lifeboat house. The lifeboat house was founded in 1853. There is an old inn by the harbour, which provides a safe haven to pleasure craft as well as fishing boats.

Perhaps the most famous episode in the history of Sennen Cove came in 1497 when Perkin Warbeck landed here. Warbeck claimed to be Richard, Duke of York, one of the lost Princes in the Tower. He convinced a few local fishermen to join him in a march on Exeter. The unhappy Warbeck was defeated and imprisoned, but the Sennen fishermen were luckily only fined and sent home.

Outside Sennen is Maen Castle, an Iron Age promontory fort. When the 'castle' was excavated over 300 pieces of early Iron Age pottery were found, making it one of only 2 sites with pottery of that date in Cornwall. The defences consist of a stone rampart protecting a ditch across the headland, with sheer cliffs on the seaward sides and a steep hillside on the other side. 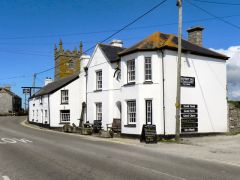 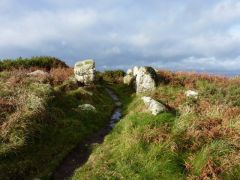 More self catering near Sennen >>

More bed and breakfasts near Sennen >>