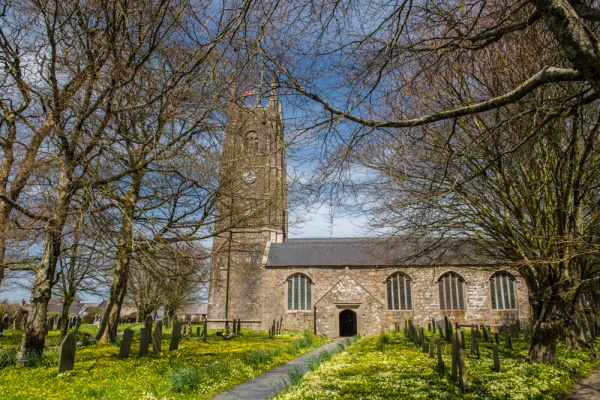 A 12th-century parish church dedicated to St James the Great, much rebuilt in the 15th century. Kilkhampton was briefly in the hands of the Priory of St James in Bristol, which later gave the manor to Tewkesbury Abbey.

The dedication to St James is a bit of a mystery, especially amongst Cornish churches, which tend to be dedicated to Cornish saints. There are two plausible explanations for the dedication. One is that it was named for St James due to its brief association with Bristol Priory.

The other is that Kilkhampton was on the direct pilgrim route between Caldey in Wales, through Cornwall, to Compostella in Spain, where the relics of St James were thought to lie. 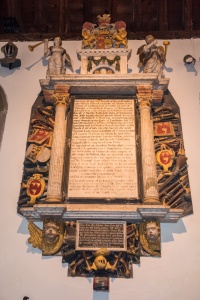 Whatever the mystery, the church itself is a lovely building, possessed of a nicely carved 12th century south doorway, the oldest surviving relic of the Norman church on this site.

It is possible that the doorway was carved by masons from Tewkesbury Abbey. It has four moulded columns with carved capitals and is decorated with carvings of odd, beastly faces, and traditional Norman zigzag patterns.

Much of the rest of St James' church dates to a late 15th-century reconstruction undertaken by the Grenville family. The Grenvilles were also responsible for the south porch, which bears the date of 1567.

Kilkhampton church is best known for its collection of gloriously carved medieval bench ends. Carved bench ends are something of a Cornwall speciality, but even among Cornish churches, the carvings at Kilkhampton are something special.

There are 31 benches in the nave with both ends carved, and another 41 benches in the aisles with one end carved. The carvings depict a variety of subjects, including fanciful arabesque ornamental fringes, heraldic shields, Biblical symbols, and heads of different sorts.

The other major feature of note is a 16th-century font made of granite, with an octagonal bowl. The bowl has a very odd inscription in an inverted Lombardic script. Below the inscription is a frieze, and below that are a set of heraldic panels.

In the Grenville Chapel is a grandiose classical monument to Sir Bevil Grenville, a prominent Royalist commander in the Civil War. See our information on Sir Bevil's monument at Wick, in Somerset.

Throughout the church are numerous wall monuments in the style of Grinling Gibbons. These are thought to be the work of a local woodcarver named Michael Chuke, who studied under Gibbons. 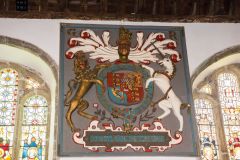