Before the Roman invasion of Britain in 43 AD, the area that is now northern England was controlled by a confederation of tribes known as the Brigantes. In 71 AD the governor of Britain, Quintus Petillius Cerialis, sent the 9th Roman legion to invade Brigantes territory.

The Romans quickly realized the strategic value of this place at the confluence of the Foss and the Ouse rivers. The legion established a fort on the banks of the Ouse. The fort, and the town that grew up about it was called Eboracum, or "place of the yew trees".

An alternative translation of Eboracum is "estate of Eboros", which might lend support to Geoffrey of Monmouth's claim that the founding king of York was Ebracus, in the 10th century BCE. 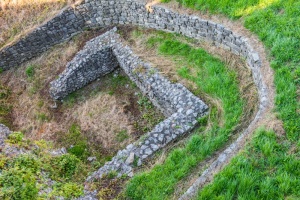 At its largest, the fort enclosed some 50 acres and supported a garrison of 6000 legionaries. The fort of Eboracum followed the usual Roman system of a grid-like pattern of streets, and public buildings such as the forum and baths.

The legionary baths were uncovered during construction work in the 1920s beneath the pub now known as The Roman Bath. The pub now features an interactive audio-visual display called "Life at the Baths", which allows visitors to "question" Roman characters about the bath and its place in Romano-British life.

So important did York become in Roman Britain that a royal palace was built in the city, and the emperor Septimus Severus stayed here with his imperial court in the years 209-211. By the 4th century, Eboracum was the capital of southern Britannia.

The Emperor Constantius I visited here in 306 - and promptly died. His son, Constantine the Great, founder of Constantinople and the first Christian Emperor of Rome, was proclaimed emperor in York. The traditional site of his crowning is preserved under York Minster. 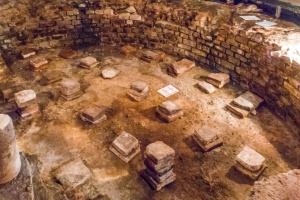 A hypocaust in the
Roman Bath Museum

The headquarters of the legions was on the site of the Minster. Roman remains were uncovered beneath the church during restoration work, including a 31 ft. high column, which has been re-erected near the south entrance to the Minster.

The most enduring legacy of the Romans, though, are the city walls of York. Little remains of the original Roman walls, the most intact section includes the Multiangular Tower, which stands in the Museum Gardens. The tower was built during the reign of Emperor Severus. It has 10 sides and stands almost 30 ft. high. There were once eight towers, including three on each side of the main entrance to the fort.

The Romans left Eboracum sometime around 410 AD, and the city, like much of Roman Britain, fell into a period of decay and decline. A new invader fell upon the city; the Anglo-Saxons.