The golden age of Anglo-Saxon York came to an abrupt end in the mid 9th century AD. The prosperity of the city made it an obvious target for the Danish Vikings who now poured forth from their homeland in search of plunder. In 866 an invasion force led by Ivar the Boneless captured the city and made the capital of their new territory in northern England.

The Vikings changed the name of the city from the Saxon Eoforwic to a more Danish "Jorvik". Although the name of Jorvik did not survive the Viking period, the Danes left a legacy of street names behind them; the suffix "gate" that attaches to so many York streets (such as Micklegate and Skeldergate) is based on the Viking "gata", meaning simply, "street".

Street names also give clues to the city's past. Swinegate, for example, refers to a place where pigs were kept. And Castlegate ... well, you get the idea. 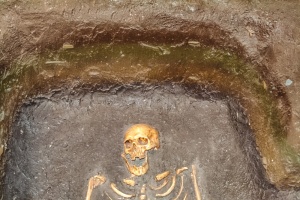 A Viking grave in the Jorvik Viking Centre

The Vikings established a peaceable community based on agriculture and trade. Houses were built from wood with wattle infill for the walls. Excavations in the city centre have shown that the Viking houses were set gable-end on to the street, and packed closely together in long, narrow strips.

Behind the street frontage were workshops, then yards with wells and rubbish heaps. Some premises may also have maintained warehouses at the rear of the property.

In the area of Coppergate archaeologists have found evidence of workshops in textiles, bone and antler carving, jewellery, woodworking, metalwork, and moneying. Luxury goods from as far away as Byzantium and the Arabian Gulf have been found side by side with goods from around the British Isles and northern Europe.

The Viking influence lasted less than a century. In 954 Eric Bloodaxe was defeated by Eadred, King of Wessex. Eadred forged an alliance between the northern Kingdom of Northumbria and his own domains in the south.

The city was not to know peace, though. A succession of local rebellions and fresh invasions from Norway kept the north of England in a state of turmoil and confusion well into the 11th century.

The final Norwegian throw of the dice came in 1066 when an invasion led by Harald Hardrada of Norway was defeated at the Battle of Stamford Bridge, just eight miles from York. Three short weeks later, the Battle of Hastings left England in the hands of the Normans.

You can explore the history of Viking York in the excellent Jorvik Viking Centre on Coppergate.

Back: Anglo-Saxon York
Next: Medieval York