Public and private building booms ensued, and the townhouses of well-to-do northerners jostled for space with new public buildings, such as the Assembly Rooms and Assize Courts. The most popular areas for townhouses were Blossom Street, Bootham, and Micklegate.

The Assembly Rooms, near York Minster, were built in 1730 for the 3rd Earl of Burlington, the leading patron of Palladian neo-classical architecture. The sumptuous level of decoration and elegant interiors made the Assembly Rooms the place to see and be seen by the leading lights of York society.

The Georgian period was one of social and cultural growth in York, though the city's importance as a trading and administrative centre declined. 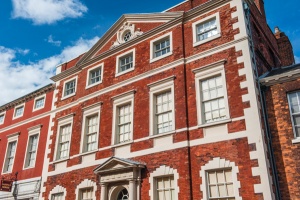 It was in one of these cells that Britain's most notorious highwayman, Dick Turpin awaited execution in 1739. Turpin had fled southern England after a spree of robbery and murder, before settling in nearby Brough.

He was captured for an ill-tempered threat to kill a labourer, and while in captivity, his identity was discovered. Turpin was hanged at Knavesmire on April 7, 1739. An effigy of the famous villain can be seen in the original cell in the York Castle Museum which was his final home.

Following London's lead, new coffeehouses sprouted up and became popular social centres. One of the most common activities at coffeehouses was discussing local news and events publicised by York's first newspaper, The York Mercury, which was published from 1719.