The withdrawal of the Roman legions from York around 410 AD left the city at the mercy of the Anglo-Saxons. The Saxons originally came to Britain as mercenaries in the Roman army, but after the Romans were gone, the Saxons and their Germanic relatives the Angles and Jutes overcame the native Britons.

Under the Saxons, the city was renamed Eoferwic, and it became the capital of the Saxon kingdom of Deirwa (see map), which extended from the Tees to the Humber. North of the Tees was the kingdom of Bernicia. 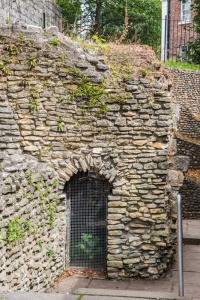 A legend tells that King Arthur recaptured the city for a time from the invaders, but even Arthur could not stem the Saxon tide for long. In the early 7th century Deira and Bernicia combined to make the Kingdom of Northumbria.

The Saxons seem to have settled into Roman York without changing the city overmuch. They used the Roman grid pattern of streets and refortified the walls. Little remains of Saxon York, however, for their wooden buildings have not survived. One surviving feature is the Anglian Tower in Museum Gardens, probably built as a watchtower in the 7th century and regarded as one of only two secular Saxon buildings in England.


In the year 627, the Christian princess Ethelburga of Kent came north to marry Edwin, King of Northumbria. Edwin was convinced to convert to Christianity, and he and his court were baptised by Bishop Paulinus in a church especially constructed for the purpose at a local holy well.

This rude wooden church, of which nothing remains, is regarded as the first York Minster. This first church was rebuilt in stone a few years later, and dedicated to St Peter.

Under Edwin's successors Oswald (634-42) and Oswy (642-71), the remaining pagan kingdoms of Britain were converted to Christianity and York became an ecclesiastical centre second only to Canterbury in importance.

Egbert (732-766), the first recognised Archbishop of York, and he made the cathedral school and library of York Minster the envy of Europe. The Minster Church burned down in 741, but it was replaced by a glorious new church containing no less than 30 altars.

York enjoyed prosperity and a prominent place in the Anglo-Saxon world, but the tides of fortune were about to turn again with the appearance in the 9th century of a fierce new invader, the Danes.

Back: Roman York
Next: Viking York