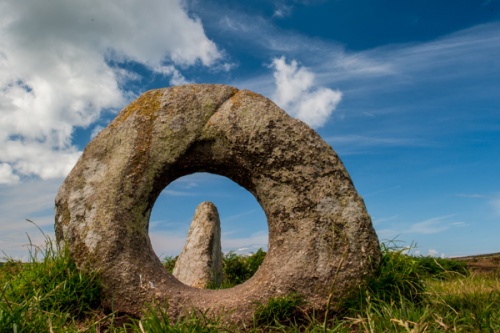 The West Country, which, for our purposes we'll define as Cornwall and Devon, is blessed with an abundance of prehistoric remains, particularly in the upland plateaus of Dartmoor and Exmoor.

There are upwards of 300 Bronze Age barrows (burial mounds) on Exmoor. A large grouping of 11 bowl-shaped barrows lies at Chapman Barrows, near Parracombe, and nearby are barrows at Longstone and Wood Barrow. There are stone circles at Almsworthy Common, Porlock Common, and Withypool Hill, and a superb hill fort at Shoulsborough Castle, near Challacombe.

Further south, Dartmoor is one of the richest prehistoric treasure-houses in Britain. Remains of human habitation have been found there dating back as far as the Mesolithic Era (8000 BC-3500 BC). Over 30,000 flint artefacts have been turned up by ploughing, notably at Gidleigh Common and East Week. These early "settlers" probably lived in temporary huts made in scooped-out depressions in the ground covered by branches and turves of sod.

Bronze Age burials (2000-500BC) are more numerous. These burials were often made in rough stone sarcophagi (like the sarcophagi of Egyptian mummies) interred in barrows like those at Fernworthy, Watern Down, and Lakehead Hill. There are 12 stone circles on the moor, probably dating from the same era, most notably at Scorhill, near Gidleigh.

The pride of place on Dartmoor, however, must go to the Bronze Age settlement of Grimspound. This eerie setting was the model for the prehistoric hut in which Sherlock Holmes spent the night in The Hound of the Baskervilles. A massive stone wall, some 9 feet thick, encompasses a 4-acre site containing 24 circular huts. 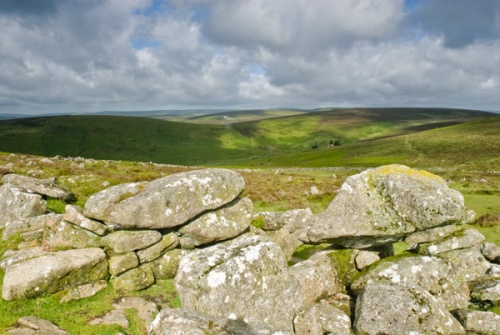 Another notable settlement, this time from the Iron Age, is at Chysauster, near St. Ives. Here, settlement began about 200 BC, in the form of a cluster of 8 huts at the foot of Castle-an-Dinas. The prehistoric tomb of Lanyon Quoit, near Madron, is another site worth seeing. The Quoit is the remains of a Neolithic chambered tomb dating from about 2500 BC.

It comprises three upright stones supporting a massive capstone. Originally the tomb was covered by earth, but all that remains now are the bare stones.

One of the strangest prehistoric relics in the West Country is without a doubt Men-an-Tol, near Lanyon. This peculiar site is comprised of two uprights either side of a rounded stone with a circular hole in the centre. Although we don't know its original significance, local legend has it that if you climb through the hole nine times against the setting sun, all your injuries will be cured.

Almost any place in the West Country is close to a site of ancient settlement or burial. Some of these sites are well known and well visited, others slumber on undisturbed by tourists. Take the time to explore some of these sites. It is worth climbing over a farmer's style or two to reach an off-the-beaten-track stone circle or burial mound, for the atmosphere can be quite moving and mysterious.