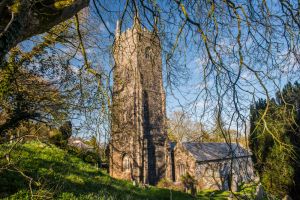 Altarnun (or Altarnon, to give it its ancient, and more accurate spelling) is a lovely little village on the northern fringe of Bodmin Moor. The village takes its name from St Nonna, the mother of St David, to whom the attractive parish church is dedicated. The church was the traditional resting place of a stone altar used by St Nonna and a fragment of late medieval glass in the east window shows an image of the saint.

The church has traditionally been called the Cathedral of the Moor, a tribute to its size, which seems odd to find in such a small village. It is late medieval, primarily 15th century, and stands on the site of a much earlier church. The most immediately striking feature is the enormously slender, tall west tower, which, at 109 feet high is one of the tallest in Cornwall. The tower was begun in the 14th century and completed in the following century.

The main interest is in the interior and comes in two parts. First, there are the early 16th century pews, which are wonderfully carved on the ends with 79 figures of animals and humans, including a man playing a Cornish pipe, a jester, and a fiddler. These date to sometime before 1530, and are generally attributed to a craftsman named Robert Daye.

Next, and most obvious on entering, is the wonderful 12th-century square font. This is one of the finest Norman fonts in Cornwall (which is high praise indeed). It features very large carvings of bearded faces, one at each corner, to which traces of paint still cling, giving the faces a wonderfully lifelike quality. Between the faces are very large carved rosettes.

There is also a fragment of the original 15th-century rood screen in the church, and a 17th-century parish chest, looking suitably aged and worn. One final treasure is a Saxon stone cross in the churchyard. The date of the cross is the subject of some debate. One theory is that it dates to the lifetime of St Nonna herself, which would probably make it 6th century. It certainly has an ancient look about it!

Near the church stands the old rectory, which was mentioned by author Daphne du Maurier in her famous novel, Jamaica Inn. Just a few steps from the churchyard is a picturesque 15th-century packhorse bridge. 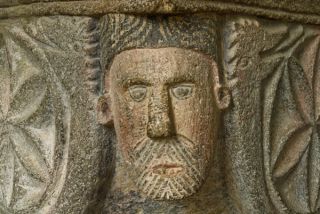