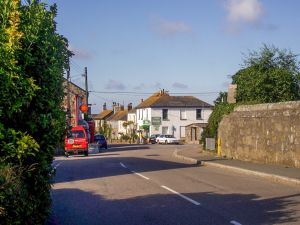 A small village near Land's End, St Bunyan is surrounded by historic and scenic attractions. The village is named for St Buriana, an Irish saint who settled here in the 6th century. Buriana is said to have cured the son of King Gerent of paralysis through the power of her prayers.

A chapel was built on the site of Buriana's oratory. Then around the year AD 930, King Athelstan stopped at the simple stone chapel to pray for success in his campaign against the Scilly Isles. Athelstan's campaign proved successful, and he built a new church on the site of the earlier chapel and created one of the first monasteries in Cornwall.

The fact that King Athelstan had established the church here led to St Buryan becoming a 'Royal Peculiar', that is, it was directly under control of the Crown, not the Church. This led to squabbles between church and monarch for generations, and in 1384 St Buryan's Church was excommunicated for eight years.

After the Norman Conquest, the manor was held by Robert, Count of Mortain, William the Conqueror's half-brother. In the Domesday Book of 1086, the village was recorded as having 6 smallholders and 6 villagers.

In the very early 13th century King John came to St Buryan to inspect the local mines. He decided that the mines could be operated more efficiently and brought in German engineers. With this kind of royal support, the village grew quickly, and in 1302 Edward I granted the villagers the right to hold a weekly market and 2 fairs.

Athelstan's church was extended by Bishop William Brewer in 1238, then largely rebuilt in the late 15th and early 16th centuries. The church boasts a notable 15th-century rood screen given jointly by the Kelligrew and Godolphin families.

The screen was cut into pieces during a restoration in 1814, but those pieces that could be recovered were used to rebuild it in 1880 and 1909. The result is astonishing, with decorative tracery and painted themes including unicorns, birds, serpents, grotesque demons, dragons, deer, and hounds in profusion.

Another interior highlight is the 13th-century granite font, with an octagonal bowl supported by figures of angels holding shields. Set onto the exterior wall of the church is an ancient sundial which also acts as a calendar.

John Wesley, the founder of Methodism, preached twice in St Buryan. The first time, in 1747, the vicar made disparaging remarks about him, and on the second occasion, the local squire threatened him with a whip. The opposition did not deter Wesley, and in 1783 the first Methodist chapel was erected here. That first chapel is gone now; it stood opposite the current chapel.

Near the parish church is a Celtic cross, set in a traffic island in front of Belmont House. The House was formerly the Kings Arms pub, a famous haunt of smugglers.

There are quite a few other standing stones on the verge of minor roads outside the village, including one near Chapel Carn Brea. Outside St Buryans are the Merry Maidens stone circle, traditionally said to be maidens turned to stone for dancing on the Sabbath, and there are further standing stones of Boscawen-Un and The Pipers.

South of St Buryan is St Loy, with lovely woodland on top of the cliffs and a trail leading down to a rocky cove. 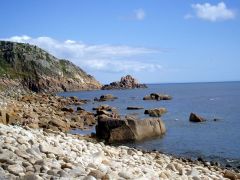 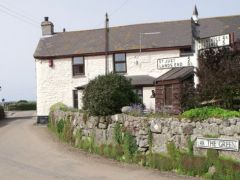 More self catering near St Buryan >>