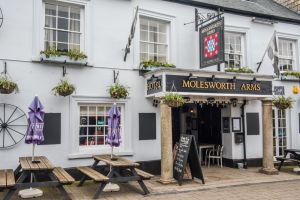 The Molesworth Arms pub in Wadebridge

Wadebridge is a popular town in north Cornwall, very well situated for visitors intending to walk the Camel Trail. The most notable historical building in Wadebridge is not actually a building, its the remarkable Old Bridge built by Reverend Thomas Lovibond in 1460. The bridge stretches 320 feet across the Camel, with a grand total of 17 arches supporting it.

Before the bridge was built there was a ford across the River Camel, with a chapel on each side of the ford. It was customary for travellers to pray for a safe crossing at one chapel, then, once they'd crossed the river safely, to stop and give thanks at the other chapel.

Reverend Lovibond, the vicar of Egloshayle, was disturbed by the number of animals and people who died crossing the river and determined to build a bridge to make the crossing safe. Construction took 8 years, and the bridge was opened in 1468.

The bridge is responsible for the present form of the town name. Reverend Before Reverend Lovibond constructed the bridge the town was known simply as Wade. After the bridge was built the name was altered to Wadebridge.

The Old Bridge, as it is usually called today, was a toll bridge, with the money collected going to maintain the structure. It was so important as a river crossing point during the Civil War that Oliver Cromwell personally led 1500 Parliamentary troops to capture the bridge. 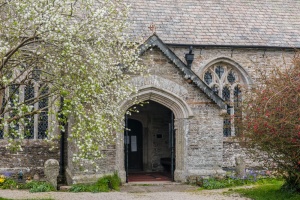 Though the town was granted the right to hold a market in 1312 it was not until 1897 that it gained a town council, and that was only because local drinking water became contaminated by sewage, and a local governing body was needed to deal with the problem.

This popular walking trail is now the third most popular tourist attraction in Cornwall. It was formed from the remains of the railway line, which was constructed in 1834 and remained in operation until 1960.

After the line went out of service it was converted into a recreational route for walkers, cyclists, and equestrians. The Trail runs for 17 miles between Padstow and Bodmin and attracts upwards of 400,000 users every year.

There are 2 historic churches in Wadebridge. On one side of the river is St Breoke's church, built in the 13th century, and completely rebuilt in the 17th century. At Egloshayle, once a separate village but now part of Wadebridge, is St Petroc's church.

Its location by the river accounts for the name Egloshayle, which translates from Cornish as 'the church by the shore'. The church is largely medieval and has traditionally had a strong link to the Molesworth-St Aubyn family of Pencarrow House.

In Egloshayle is the inn 'The Earl of St. Vincent', one of the oldest in Britain, with roots going back to the 12th century. Three miles outside the town is the lovely stately home of Pencarrow House, while the Elizabethan manor of Prideaux Place is only 5 miles away.

There are several paid parking areas close to the town centre, and several more close to the start of the Camel Trail. Several businesses serve Trail users with bicycles for hire.

I spent an enjoyable afternoon wandering around Wadebridge. The main shopping street off The Platt is pedestrianised, and that is where you will find the Molesworth Arms pub - a lovely spot for a cold pint.

I was feeling energetic so I walked across the old medieval bridge to see it from both sides, then walked along the riverside to the Challenge Bridge, which took me past some playing fields into Egloshayle, where the medieval church was open. I highly recommend visiting the church if you have time, and the walk along the river is lovely. 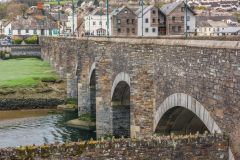 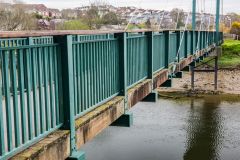 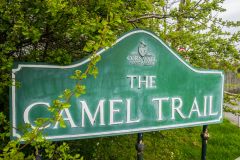 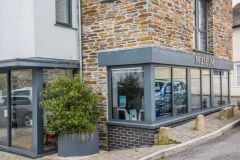 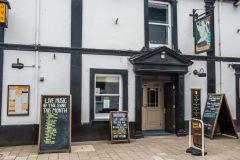 More self catering near Wadebridge >>

More bed and breakfasts near Wadebridge >>