HERITAGE HIGHLIGHTS:   The first 'tor enclosure' settlement to be identified 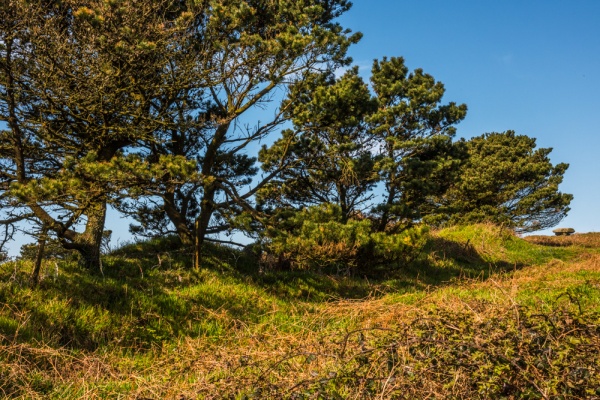 Earthworks of the Neolithic settlement at Carn Brea
A Neolithic hilltop settlement towering over Redruth, dating from about 3900 BC. The site was used for thousands of years, and excavations have revealed Neolithic remains, Bronze Age axes, golden Celtic coins, Roman coins, and later artefacts.

The summit of Carn Brea was occupied at least as early as 3900 BC. The central and easternmost tors of the hill were enclosed within a stone wall defended by an earthen bank and ditch, and the entire hilltop enclosed within a larger outer wall. A double rampart linked the two tors. Radiocarbon dating has shown that the first wall enclosing the hill top was built before 3900 BC and had collapsed by 3350 BC. The outer wall enclosed an area of 11 acres, and the central inner wall defending an area of 2 acres at the summit.

The type of enclosure found at Carn Brea is similar to causewayed camps found in lowland areas like Wiltshire. The unusual hilltop layout was dubbed a 'tor enclosure'. Carn Brea was the first tor enclosure to be identified, but since then another 4 sites in Cornwall have been found using the same style of defence.

The walls stood 2 metres high and were 2 metres thick. They were not continuous, but used natural rock outcrops and large surface boulders.

Remains of 12-14 hut platforms have been found, with flint tools and pieces of pottery. Partially worked pieces of stone shows that the inhabitants used the nearby outcrops of granite to manufacture stone axes and grinding stones for trade. Pottery pieces used clay from St Keverne, 29 miles away again suggesting an active trading network. 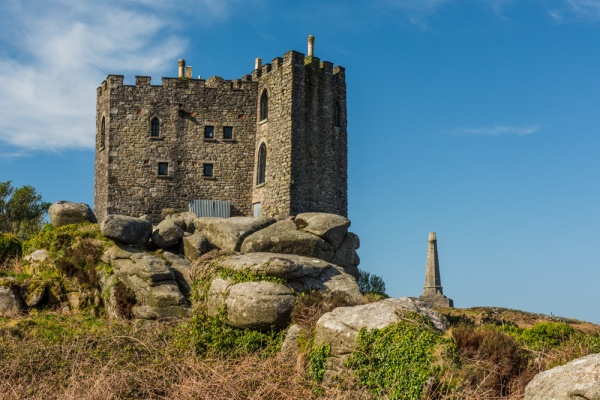 Equally intriguing as the stone axes was a find of some 700 flint arrowheads. This seems to suggest that the settlement was attacked. Every one of the timber huts shows signs of burning, so it seems reasonable to think that an attacker besieged and then burned the settlement. The earthworks may also have been slighted, or intentionally destroyed, by an attacker.

The site was reoccupied in the Iron Age, and there are clear signs of mining activity on the sloping hillsides of the site. Finds of gold slaters from Kent suggest a very wide trading network.

Roman finds have also been made on the hilltop, but there does not seem to have been any major settlement during the Roman period.

The first study of the Carn Brea site was by the 18th century antiquarian William Borlase, a native of Pendeen in Cornwall. In 1754 Borlase published a study of his findings in which he attributed the remains atop the hill to Druids - a popular theme amongst antiquarians at that time. The first extensive excavations took place in 1895, with more modern surveys in the 1970s and in 1985. 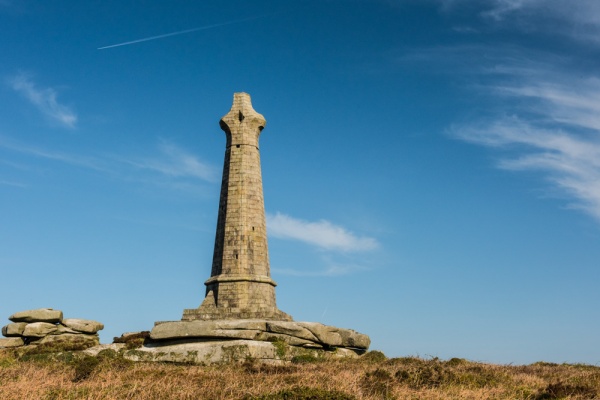 The summit and slopes of Carn Brea are covered with interesting remains. At the foot of the hill is St Euny's Well, a holy well linked to a Celtic missionary who visited the area around AD 500. There is another holy well to the same saint at Sancreed. The nearby parish church is also dedicated to St Euny. Another well can be found on the northern slope of the hill, near the castle. This the Giant's Well. A local folk tale says that a giant lived on Carn Brea, and engaged in a fight with a giant from St Agnes Beacon. The Carn Brea Giant lost the fight, and the rock formations that litter the hilltop are his petrified bones.

At the highest point of the hill is the Bassett Monument, a huge Celtic cross standing 90 feet high. The cross commemorates Francis Basset, the 1st Baron de Dunstanville and Basset. Basset was a mine owner and anti-slavery advocate who was granted his titles for building defences to protect Plymouth from raids by Spanish and French forces in 1779. Beside the Monument is Cup and Saucer Rock, a large, relatively flat rock outcrop with obvious depressions in its surface. The stone has been linked to ancient human sacrifice, though this seems very farfetched.

Near the Basset Monument stands the most obvious structure on the hill, Carn Brea Castle. The Castle was built in 1379 as a chapel, and was rebuilt in the 18th century by the Basset family as a castellated hunting lodge. In a hollow between the Castle and the Monument is the Smugglers' Cave, a tunnel said to stretch through the hillside to Redruth town below. The tunnel, now blocked for safety reasons, is most likely an old mine shaft and has nothing to do with smuggling. 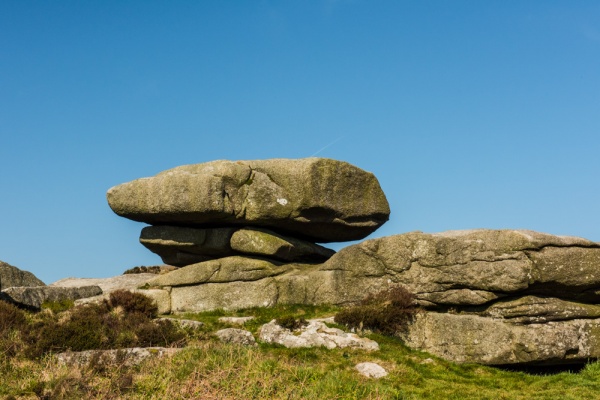 There is a parking area near the summit, reached by a narrow lane from Carnkie village on the south side of the hill. Footpaths also converge on the site from 4 different directions, so you have plenty of options for exploring the hill. We opted to take the lane from Carnkie, which worked quite well, though I wouldn't want to try it on a summer weekend, as the lane is very narrow with very few passing places.

About Carn Brea Neolithic Settlement
Address: Carn Brea Village, Redruth, Cornwall, England,
Attraction Type: Prehistoric Site
Location: There are footpaths to the site from the south side of Carn Brea Village and a lane from Carnkie leads to a small parking area near the summit.
Location map
OS: SW683407
Photo Credit: David Ross and Britain Express