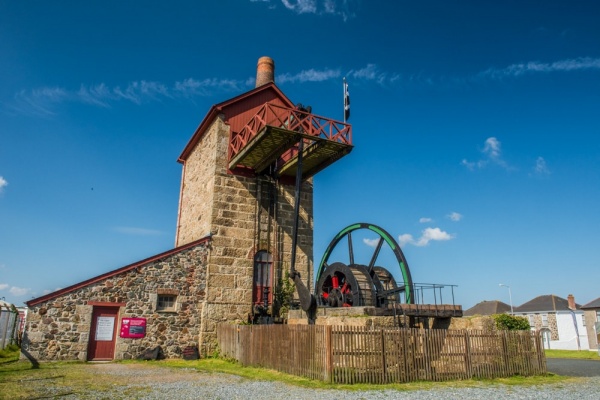 East Pool Mine is an industrial heritage discovery centre built around historic Cornish beam engines. The mining centre is part of the Cornish Mining World Heritage Site. The visitor centre traces the long heritage of mining in Cornwall and its impact on Cornish social history.

The star of the show is a huge 52.5 tonne Harvey beam engine measuring 90 inches. The exhibits are housed in tall engine houses so common in Cornish mining areas - the main chimney stack rises to 36 metres.

Both engines on display were originally steam-powered, taking advantage of the advances in steam technology made available by local engineer Richard Trevithick. One of the engines has been converted to run on electricity so that visitors can see this historic behemoth in operation.

The discovery centre is located very near Trevithick Cottage, home of Richard Trevithick. The Cottage is open during the standard visitor season, with free entry.

Built in 1887, this shaft engine house was the last beam whim engine to be built in Cornwall. The engine was saved from being sold for scrap in 1941 and has been under the care of the National Trust since 1967. The engine is regularly run for visitors. 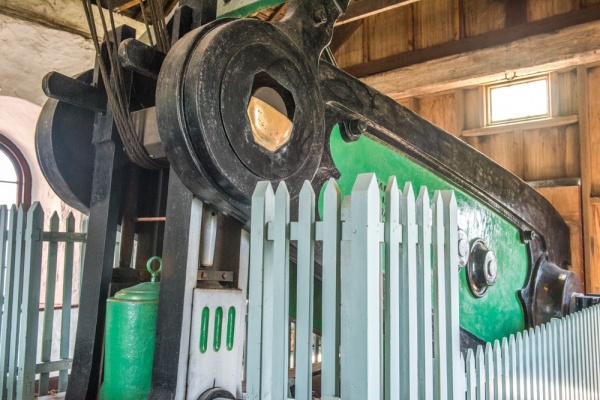 Much older than Michell's Engine House, this complex of mine buildings dates from the 1920s. The buildings have been transformed into a Discovery Centre exploring the heritage of Cornish mining. The large engine house contains a 90-inch engine saved from destruction by an American benefactor.

Engineer and inventor Richard Trevithick lived in this attractive thatched cottage in Penponds throughout his childhood and until he married Jane Harvey in 1797. The house is tenanted, so only one room is open to visitors. That room is the former parlour, which retains its original wooden panelling. and has memorabilia connected with Trevithick on display. The cottage itself was built in 1700 and rescued from decay by the Cornish Engines Preservation Society before it was given to the National Trust in 1967.

Finding the cottage isn't straightforward. There are no signposts, at least none that we could see. That's not too surprising considering that the cottage is a private dwelling, open only on a fairly limited basis during the main tourist season. The cottage is located on Higher Penponds Road, in Penponds village, on the south-western edge of Camborne.

The surrounding houses are mostly modern, so that you feel like you are approaching through a 20th-century housing estate, not the place you would expect to see an 18th-century whitewashed and thatched cottage. Look for the small National Trust sign outside the house. 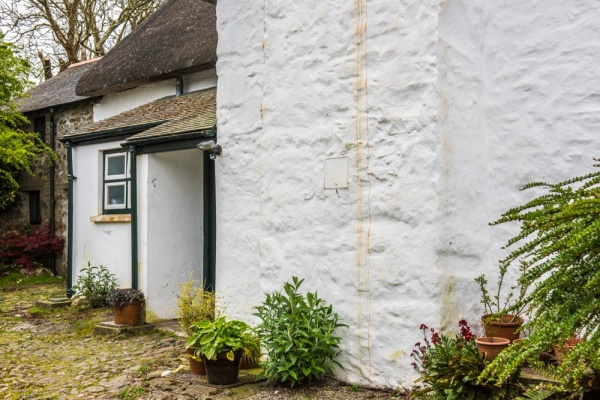 Actually finding East Pool Mine isn't as easy at it could be, in part because it is spread over three distinct sites. The easiest part of the site to find is Michell Engine House, located on the south side of the A3047 (Fore Street), between Redruth and Camborne. There is a small parking area outside the engine house.

Michell's is the only functioning engine house making up East Pool Mine, but it has limited operating times compared to the main visitor attraction of nearby Taylor's Engine House. You can, however, freely explore the engine house exterior at any time.

The main East Pool Mine site is tucked away behind Morrison's superstore, opposite Michell's Engine House. It isn't immediately obvious where to find the mill and its parking area, but if you enter the Morrison's parking area you will soon see arrows guiding you through the parking lot to the mill site, screened by a belt of trees.

The Taylor's Engine House site is by far the most complete part of the attraction. You enter through the former Compressor House, which has been transformed into a spacious exhibition area, with pieces of traditional mining equipment. Behind the Compressor House is the Winder House, which has been remodelled into a theatre, where you can see a short film about the site and the heritage of mining in Cornwall.

Beside the Boiler House is Taylor's Engine House, which houses the huge 90-inch beam engine. You can climb up within the engine house to see the massive beam from above, and walk around the oversized boiler below.

You can wander around the site on your own, and there are volunteer stewards in the engine house to answer questions, but I highly recommend you take one of the free guided tours of the site. We had an extremely good tour guide who gave us an overview of the site, its history, and how all the various bits of the mine worked together. 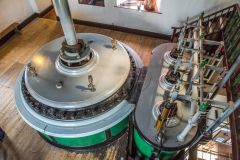 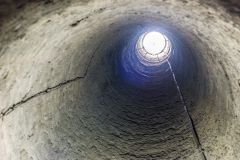 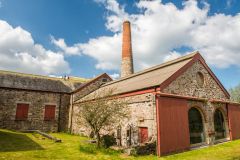 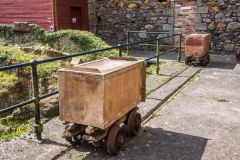 Nearest Accommodation to East Pool Mine:

More self catering near East Pool Mine >>

More Hotels near East Pool Mine >>

More bed and breakfasts near East Pool Mine >>