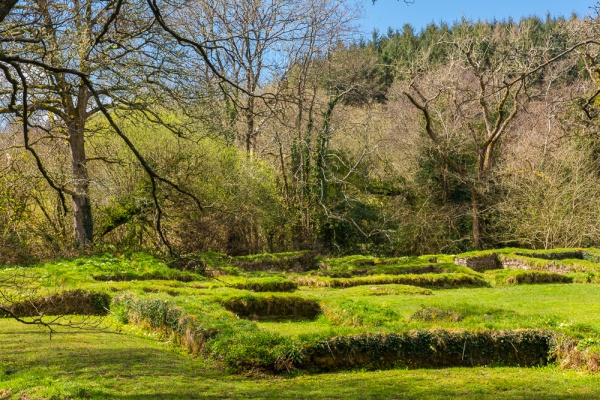 Penhallam Manor is the site of a 13th-century moated manor house in a wooded setting. Nothing remains of the manor above ground level, but the complete layout of the house can be easily seen in the turf-covered foundations.

The manor of Penhallam formed part of the honour of Cardinham. The holder, Richard fitz Turold, probably began the building at Penhallam around 1187. His descendants, the de Cardinham family, were responsible for the major building here. 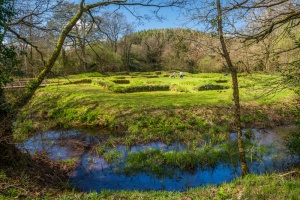 The manor from across the moat

The site is surrounded by a ringwork constructed shortly after the Norman Conquest. The surviving walls average about .8 metres wide and rise to a maximum height of 1.4 metres high in one corner. The moat is up to 12 metres wide and flat-bottomed. There are four ranges of buildings visible on the site.

The earliest is the east range, which was built around 1180-1200. A wardrobe and garderobe were added around 1200. Further expansion took place between 1224-1236, when a hall, chapel, bakehouse, and buttery were added. Kitchens and a service wing were rebuilt around 1300.

We know that the house was still occupied in 1319 when Isabella de Beaupre was granted a license to hold mass at her oratory at Penhallam. It seems likely that the house fell into disuse and was abandoned sometime around 1360.

There is a small parking area off the minor road outside week St Mary. From the parking area, a signed trail leads through lovely woodland for 10 minutes before reaching the manor site. The going can be muddy in places, and there are some very muddy places inside the manor itself, so waterproof footwear is a good idea. The manor site is idyllic and peaceful, and when the late afternoon sun filters through the surrounding trees Penhallam is a wonderfully atmospheric place. 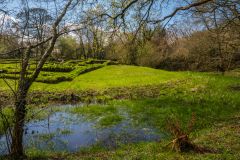 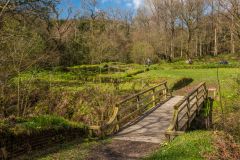 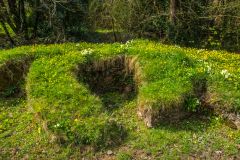 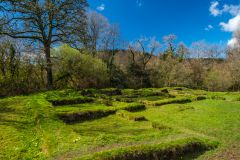 More self catering near Penhallam Manor >>