HERITAGE HIGHLIGHTS:   1638 painted plaster coat of arms to Charles I 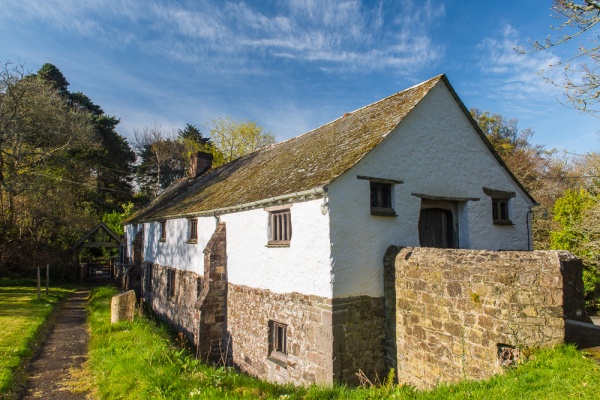 The parish church of St Winwaloe in Poundstock, Cornwall, dates to the late Norman era, with many additions and rebuilding in the 14th and 15th centuries. At the bottom of the churchyard, built directly over a small stream, is a pretty Tudor 'church house', built from 1540-1558.

The church house, or 'Gildhouse' as it became known, was built as a centrepiece for parish festivals, such as the popular Whitsuntide festival that was such an important part of medieval life. At times like Whitsun the entire parish gathered together to celebrate, to eat and drink, and to raise money for charities, and for church maintenance and building projects.

Parishioners would donate whatever they could afford; if they were well-to-do they might give money, but most people gave goods such as honey, hops, barley, and malt. The younger parishioners made ale and baked cakes. The festival might last as long as a week, and up to 500 people would come to eat, drink, and socialise, paying just one or two pennies for the food and drink. 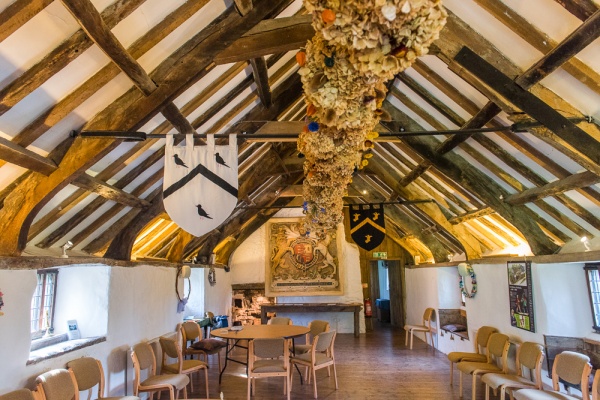 The parish guilds also met in the Gildhouse, hence the name. These guilds were similar to the trade guilds in large towns, but were not trade-oriented. They were voluntary groups founded by elders in the parish; a sort of mutual aid society who would help out poor parishioners, dispense charity, care for the church, pay the priest for funeral services, and organise feast days.

Guilds and feasting were suppressed by Edward VI, and church ales, as the feasting events came to be known, were abolished entirely in 1640, at the height of Puritan influence. The Puritans considered church ales to be little more than an excuse for drunkenness and improper behaviour.

Church houses were no longer required so were either sold off or, more usually, were no longer maintained and simply fell into decay. Some, like that at nearby Kilkhampton, were converted into public houses, thus carrying on their original purpose of eating and drinking.

Poundstock Gildhouse is almost unique. It is one of very few church houses that survived and have remained in continuous use from medieval times to the present day.

The Gildhouse was built on a rectangular plan, with foundation walls measuring 60 feet long and 20 feet wide. The ground floor was built of stone and the first floor of cob; a mixture of straw, clay, and dung. The ground floor was divided into a store room, a small meeting room, a kitchen, bakehouse and brewhouse, with a large fireplace in the south wall. The first floor was a single, long hall, used for feasting, or 'church ales'. The most popular church ale events were at Whitsun and May Day. Ales were brewed on the premises and sold to raise money for good causes. 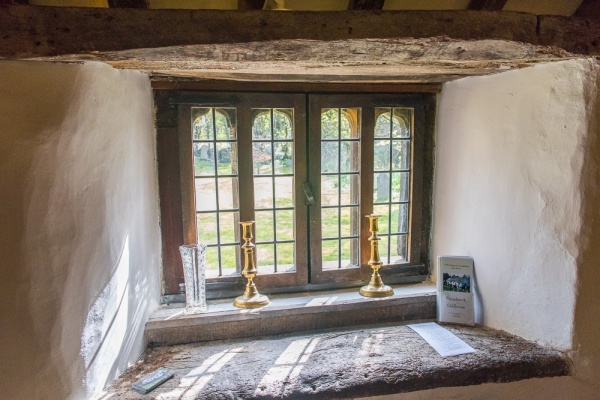 In 1596 a special celebration was held in the Gildhouse in honour of Mr Charmond and Mr Grenvill, who mustered the men of Poundstock to counter the threat of the Spanish Armada invasion 8 years earlier. The total cost of the wining and dining the pair was 8 pence for cakes and drinks.

The Gildhouse was used as an almshouse from 1600 and as a village school from at least 1758. As many as 50 children attended at a time, paying the vicar, who also acted as schoolmaster, a penny per day to learn basic reading and writing skills.

The schoolmaster almost certainly would have been seated at the south end of the upper hall, near the fireplace. Unfortunately, the school could not compete with a purpose-built Methodist school erected in the 19th century and by 1858 it had closed down.

The bottom floor of the Gildhouse was used as a poorhouse from at least 1766, but by 1820 both floors were used to house poor families. Up to 20 people lived here at any one time, in addition to the school and a stable on the ground floor.

One notable feast held in the upper hall came in 1805 when 32 gallons of ale were drunk to celebrate Admiral Nelson's victory at Trafalgar. 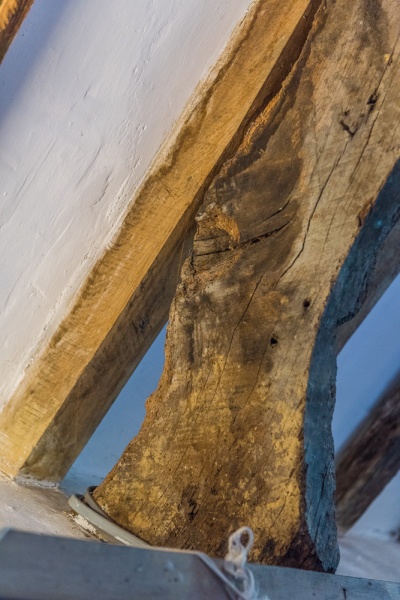 By 1841 six families lived in the Gildhouse, each occupying a tiny single room where they ate, slept, and cooked. The last poorhouse resident left sometime before 1901. After that, the Gildhouse was used for Sunday school and for parish festivals. It housed a Men's Club, where men of the parish gathered to read books, play games, smoke, and discuss local affairs.

After that, the building was used as the village hall, but by then it was in very poor condition. Architect EH Sedding was called in to restore the Gildhouse. a new slate roof was installed, and the internal partition walls were removed. Sedding's work helped the Gildhouse live on for another century, but the building was in dire condition by 2007.

A comprehensive restoration project was launched; rotten timbers were replaced, the cob walls repaired, and new gutters installed. Throughout the process, the original medieval structure was preserved and traditional building techniques and materials were used. The result is a wonderful example of how to do historic restoration the right way; the Gildhouse looks ready to continue for another few centuries. 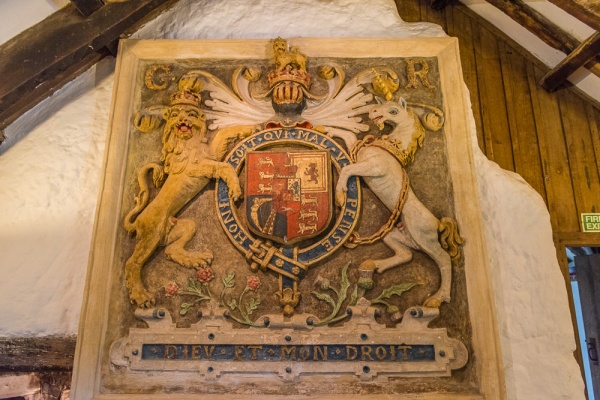 The Royal Coat of Arms

The most interesting historic feature inside the Gildhouse is a beautifully moulded plaster coat of arms to Charles I, dated 1638, hanging on the south wall. This massive coat of arms measures fully 7 feet square. That it survived at all is remarkable, for most royal coats of arms to Charles I were destroyed by his Parliamentary foes during the English Civil War.

The royal coat of arms hung on the north wall of St Winwaloe's church for over 250 years, but when a series of late medieval wall paintings were discovered during restoration work in 1901 it was moved to a new location in the tower so the wall paintings could be restored.

Unfortunately, the new location was subject to damp, and rainwater caused terrible damage to the lath backing panel that supports the moulded plaster. In 1985 the plasterwork was carefully restored and mounted on a new stainless stell mesh backing.

The coat of arms was then moved to the Gildhouse for presevation, and so it could be displayed in a safe environment. The result is simply stunning; the paintwork is original, and the craftsmanship is astonishing. Historians believe that the same craftsman who carved the coat of arms was also responsible for sculpting the Penfound monument in the Lady Chapel of the church. The Penfounds were a prominent local family who paid for the coat of arms to be made.

So rather than destroy the medieval doorway, the royal coat of arms simply had to stay put in the Gildhouse. I'd hate to have been the restorer when they realised that after all their hard work the coat of arms was too big for the doorway.

The Gildhouse holds regular educational events, including 'Tudor Days', teaching children cob-making, baking in the Tudor ovens, and brewing. It can be hired for events, such as wedding receptions. As of this writing, it is open to the public on specific days from spring through autumn. Please check the official website for exact times. We feel quite fortunate that our visit to the area coincided with one of the Gildhouse open days and we were welcomed by a pair of very friendly and enthusiastic volunteer guides. 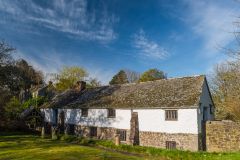 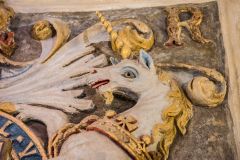 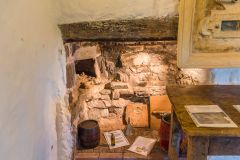 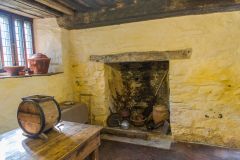 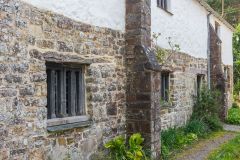 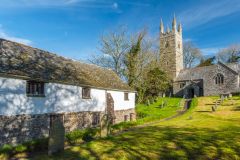