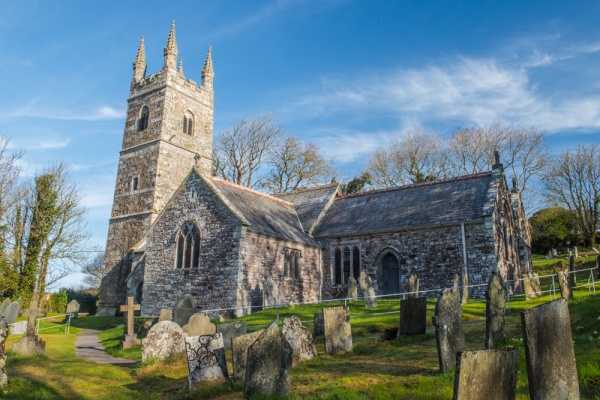 The village of Poundstock lies in a shaded dell a few miles south of Bude. The village name comes from a 'pound' or enclosure for cattle.

There was a church recorded here in the Domesday Book of 1086, but the present church of St Winwaloe dates to the 13th century, though the nave, aisles, and chancel were rebuilt in the 15th century when a west tower with striking pinnacles was added. The original dedication was to Winwaloe, a 5th-century prince from Britanny and abbot of Landevennec Abbey. Winwaloe lived an ascetic life and was given to wearing clothes of goat hair, and sleeping on a bed of boards with a pillow of stone.

The dedication was later changed to St Neot, then reverted to Winwaloe in the 1970s. a holy well linked to St Neot stands roughly half a mile from the church.

The church has had a colourful history, to say the least. In the late 13th century there was an ecclesiastical power struggle for control of Poundstock parish. In 1282 the rector of Morwenstow took over the church by force and installed a vicar of his choice. 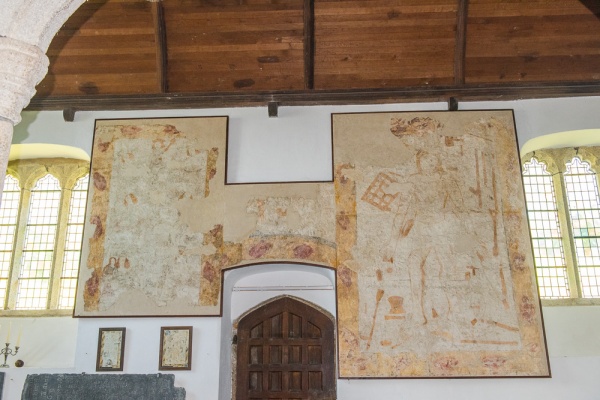 Murder at the Altar

During the 14th century, Cornwall was a lawless place, and gangs of pirates sailed Widemouth Bay attacking passing ships, pillaging and kidnapping. One of the pirates was a man named William Penfound, who must have had a bit of a double life, for he was also assistant curate at Poundstock church.

It seems the Penfound had a falling out with other members of his pirate gang, and on 27 December 1357 he was assisting at Mass for the Feast of St John the Evangelist when his fellow gang members burst into the church and brutally hacked him to death in front of the altar.

So savage was the attack that the altar cloth and church vestments were splashed with blood. The attackers also killed several of Penfound's relatives who were attending the service. Ever since it is claimed that Penfound's ghost haunts the church.

The attack was notable even for the lawless days following the Black Death of 1348-50, and Edward III ordered an investigation. With remarkable speed, John Bevile was arrested and sent for trial before the Lostwithiel Assizes on 26 March 1358, just three months after the fatal attack.

Other members of the Beville family were accused of being party to the attack or harbouring the attackers after the event. All were acquitted of the murder charge, though they were heavily fined and had to forfeit property to the crown. They requested, but were refused, the leniency to pay their fines by instalment.

John Beville was pardoned and continued a life of crime, including kidnapping and ransoming wealthy merchants. 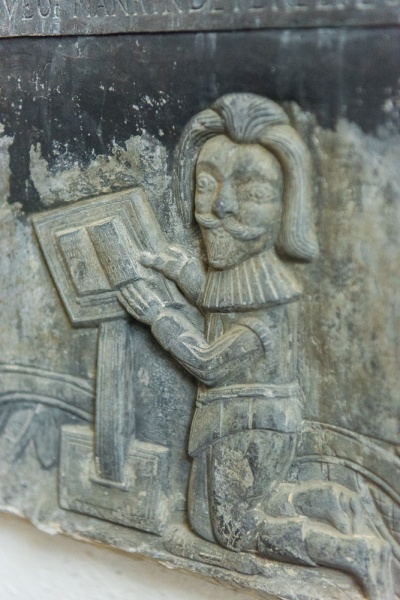 Another member of the Penfound family, Kate Penfound, eloped with John Trebarfooot of Trebarfoot Manor. Her father intercepted them, and in the fight that followed all three were killed.

A later church rector was sent to prison for life, convicted of being involved in a murder. In the 16th century, the rector was hanged for joining a revolt against the imposition of a new Book of Common Prayer. Another Tudor rector, William Woodwarde, was a bit of a ladies man, and was once spotted, his trousers in one hand, helping one of his mistresses escape over a wall while her husband bellowed at the door. Thankfully things are a bit more peaceful in Poundstock today.

On the wall is a beautifully carved slate memorial to several members of the Trebarfoot family, including John Trebarfoot, who died in 1630.

There are several reminders of the Norman foundation of the church, including the square granite font, dated to around 1200, and you can see the remains of a Norman pillar piscina. Also of possible Norman date is a stone coffin slab carved with a worn cross. 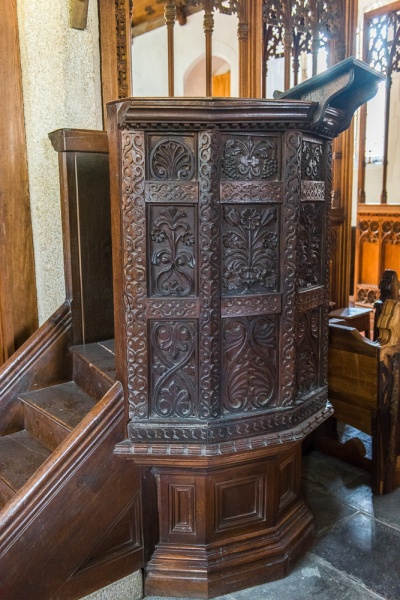 The most interesting historic feature is a large 16th-century wall painting over the north doorway, discovered hidden under layers of limewash during restoration work. The paintings are in three sections; the first depicts the Tree of the Seven Deadly sins, the largest panel depicts the Warning to the Sabbath Breakers, while the partial third section shows thew lower half of a scene with St Michael weighing souls.

The Warning to the Sabbath Breakers is particularly interesting. The theme was simply a message to keep the Sabbath sacred and avoid working. A variety of medieval working tools are shown inflicting wounds on a figure of Christ. The lesson is clear; work on the Sabbath and you are directly harming Christ and the Church.

There are two fragments of 16th-century glass. One fragment in the Lady Chapel depicts an ox, while in the south transept is a glass fragment showing a section of a castellated canopy.

In 1903 the medieval rood screen was removed, but screen panels were re-used to make the present choir stalls. Other painted panels were mounted as a reredos behind an altar in the north aisle. Here you can make out the figures of several saints, including St Bartholomew, St Philip, St Jude, St Blaise, St John the Baptist, St Sitha, and another that may be St Helena.

At the bottom of the churchyard is the Poundstock Gildhouse, a picturesque late medieval church house, or feasting hall, where parish feasts were held. Ale was brewed and cakes baked on the premises, and feasting took place in the upper hall. The gildhouse has been in use continuously for over 450 years and is still used for its original purpose. In the hall is an extremely large gilded plaster royal coat of arms to Charles I, which originally stood in the church. It is arguably the best royal arms in Cornwall.

The combination of the gildhouse and the beautiful medieval church makes Poundstock one of my favourite destinations in north Cornwall. 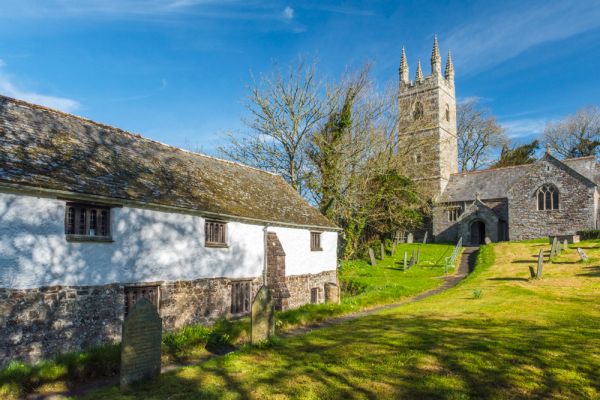 The Tudor Gildhouse and the church 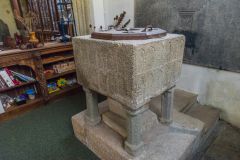 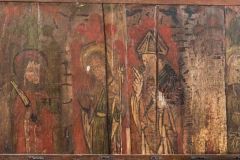 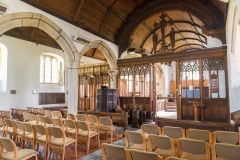 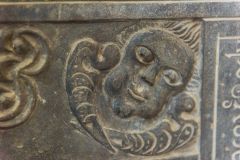 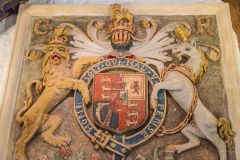