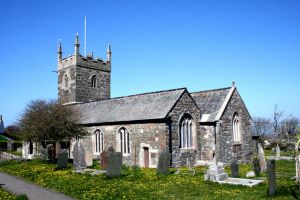 Mullion, St Mellanus Church
The parish church of St Mellanus (alternately known as St Mullion or St Melan) is a 13th-century building that was substantially rebuilt in 1500. The chancel and tower still retain much 13th-century work from the original church. The building is composed of three east gables with an offset chancel, a commonly used layout in Cornwall.

Just beside the south porch is a late medieval churchyard cross, found being used as a kerb stone near the lych gate in 1870, and re-erected on a modern base in its current position.

Both the north and south doors are ancient. The north door may date to at least the 11th century. It is unusual in that it retains studs made of wood, rather than the more common iron studs used in later doors. The south door has an amusing dog door set into it to allow canine visitors to enter in - or, one supposes, to be ejected if they caused trouble!

The interior is notable for the wonderful collection of carved 16th-century bench ends. The carvings are profuse and varied; subjects include the Passion of Christ, cherubs, initials, and a series of grotesques. One unusual carving depicts Jonah inside the whale.

The striking rood screen is mostly modern, but it incorporates pieces of the original 15th-century screen. There is a plasterwork coat of arms of Charles II over the north door, thought to be the gift of the king himself, who is said to have attended a service here when staying at nearby Erisey Manor.

There are original 15th-century wagon roofs over the nave, chancel, and aisles. The chancel roof is supported on corbels carved with figures of angels. One final feature is an octagonal font, dated to the 15th century, which features a carving of a serpent. Another unusual feature is the floor, which is not made of stone, but of lime ash, prepared by techniques that have long been lost.