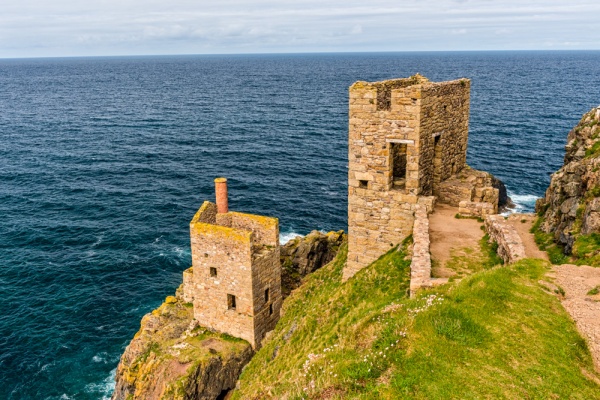 Botallack is a historic mining village near St Just, with the remains of a stunningly scenic mine perched on the clifftops. Two engine houses remain, plus the Count House and Count House Workshop, both restored, with displays on the local and natural history of the area.

The Botallack mines are part of the Cornwall and West Devon Mining Landscape World Heritage site, based locally around the historic mines in the St Just area.

The popular 2015 TV series Poldark was filmed partly in Botallack, and Manor Farm played the part of Ross Poldark's fictional home of Nampara in the 1970s series.

Low on the cliffs outside the village stand the abandoned remains of Crown Mine. Two engine houses remain, housing the entrance to shafts running as much as 400 metres out under the sea. The deepest shaft is 500 metres beneath sea level. On the clifftop is one of the arsenic refining buildings linked to the mines.

The St Just area is the home of cliff-mining, with similar mine working clinging to cliff-side sites along the rugged coast. The Crown Mines at Botallack began around 1721. In 1858 the Boscawen Diagonal Shaft was dug to access lodes over 1/3 mile under the sea bed. Famous dignitaries came to see this innovative shaft and take away souvenir pieces of minerals, among them the Prince and Princess of Wales, Prince Arthur, and author RN Ballantyne. 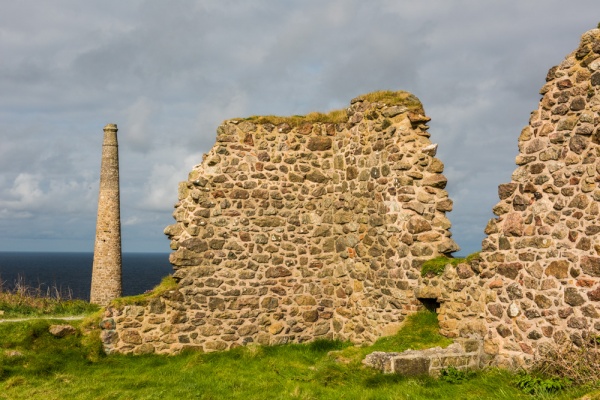 Ruins beside the Count House

In fact, so many gentry decided to visit that the constant presence of souvenir-hunting visitors became a nuisance and a safety hazard to the miners, and an entrance fee of half a guinea was imposed, with the proceeds donated to a relief fund for widows and injured miners.

The mine suffered losses in a depression in the 1870s, and when a section of a tunnel collapsed in 1895 the mine closed. When tin prices rose in 1905 the mine briefly reopened, only to close again a decade later.

The Upper engine House served as a winding house for the Boscawen Diagonal Shaft. It stands 110 feet above sea level, and about 50 feet above the Lower Engine House. The engine house powered a skip taking ore up the 30-degree incline of the Boscawen shaft. The shaft closed in 1874 and by 1880 the Upper Engine House had been stripped clean of its internal workings.

The mining heritage site is now looked after by the National Trust, who own large sections of the coast. The Trust has restored the Count House Workshop to act as a heritage centre and cafe. The historic building originally served as a stable and a carpentry workshop. It was later used by the Penzance School of Mines as a schoolroom. There is a display on the area's connection to author Winston Graham, who was inspired by his visits to the area to write his popular series of Poldark books.

The car park beside the Count House Workshops acts as a good central location for circular walks exploring the mining remains along the coast. 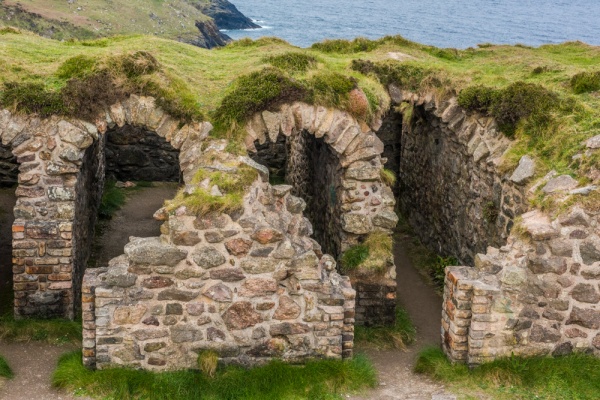 A circular walking trail of about one mile starts at the Count House parking area, loops south to the coast, where you will find the remains of West Wheal Owles mine. The mine was the scene of a tragic accident in 1893 when miners blasted through into the flooded workings of neighbouring Wheal Drea. Nineteen men and a boy were drowned when water rushed into West Wheal Owles. The mine was subsequently closed, and the miners' bodies were never recovered.

Tin from Botallack contained traces of arsenic. Tin ore was roasted to extract arsenic gas, which condensed on the arched roofs of condensing chambers. Small boys were sent into the condensing chambers to scrape the dried arsenic off the chamber walls. Thankfully the site has been cleansed of the toxic arsenic remains, so you can explore in safety.

Beyond the arsenic works are tin dressing floors also built in 1906. At one end are the ruins of large stamps, which crushed the ore. Below are circular buddles for extracting the heavier tin particles from the lighter waste ore.

From the tin-dressing floors, you pass along the coast until you come to the Crown Mines engine houses, clinging to the steep cliffs.

Looking down from the Upper Engine House to the Lower one it is not hard to get a sense of vertigo. It is astonishing that the miners were able to build the Lower Engine House, with such meagre access from the steep cliffs above.

Finding the car parking area for the mines is very easy. From the B3306 coastal road, there are two entrances to the village. Take either road and where the two roads meet follow the unpaved track towards the coast. The parking area will come into view just past the Count House. 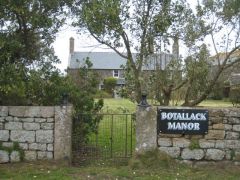 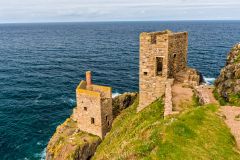 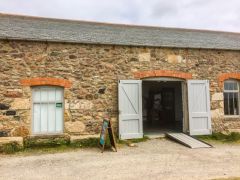 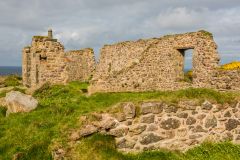 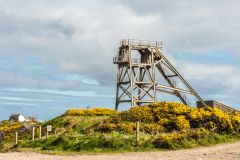 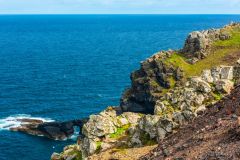 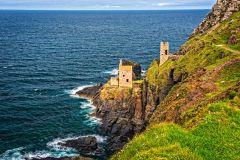 More self catering near Botallack >>

More bed and breakfasts near Botallack >>