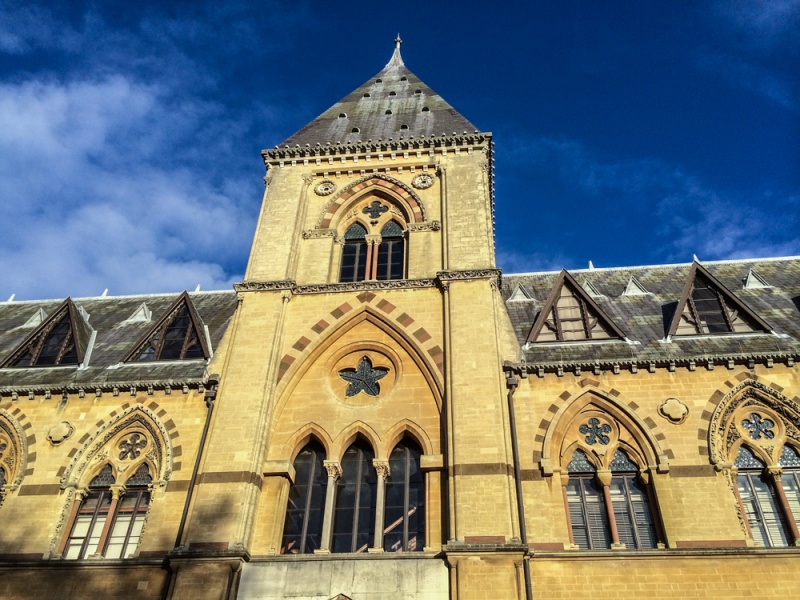 The grand Victorian facade of the Museum of Natural History

Next door neighbour to Pitt Rivers, this huge collection of natural history and sciences includes gemstones, dinosaurs, fossils, zoology, insects, and much, much more. Housed in a superb Victorian Gothic building.

This popular museum shares the same striking 19th-century building as the Pitt River Museum. The museum was founded in 1860 as a centre for the study of science at Oxford University. From its very academic founding focus it has grown to be one of the foremost natural history museums in the world, housing the university's collection of geology and zoology.

The building itself deserves special mention; it is a superb example of Victorian Gothic Revival architecture, designed by Benjamin Woodward according to the ideals of John Ruskin. The building is centred around an exquisite detailed inner court with a roof of glass and wrought iron, decorated to resemble the unfolding branches and leaves of palm, sycamore, and walnut trees.

The court is surrounded by beautiful stone columns, each made from a different British rock, with the column capitals carved to depict all of the botanical orders. Around the court are statues of famous figures in the study of science, from Aristotle to Darwin, Linnaeus to Roger Bacon.

Among the most popular exhibits on display are a collection of gemstones, dinosaur fossils found in the Oxfordshire region, and the Oxford Dodo. The dodo was a flightless bird native to Mauritius, first known to Europeans in 1598. Dodos were considered a curiosity in Europe, and one found its way into the collection of John Tradescant in London. Tradescant's collections were bequeathed to Oxford antiquarian Elias Ashmole, founder of the Ashmolean Museum.

Only the mummified skull and one foot of the dodo remain, but this is still the most complete dodo known today and is considered a globally important specimen. These scanty remains, plus early drawings of the bird, have enabled the museum to create a life-sized model of what the dodo looked like, on display beside the skeleton. Even that likeness is subject to debate, however, as early drawings were not always accurate and may simply have been stylised, 'fashionable' depictions, rather than anatomically correct.

Museum exhibits are divided loosely into two broad categories, Life, and Earth. The Life Collections include over 250,000 examples of zoological specimens, including many that are endangered or extinct. Collections include items gathered by Charles Darwin and Thomas Buell. There is a huge Entomological collection (insects to you and me), with over 5 million specimens.

The Earth Collections include over 375,000 fossils, with items from as far away as China, Scandinavia, and North America. There are also over 30,000 mineral specimens, including meteorites and gemstones, plus a large number of fascinating mineralogical instruments. Part of the collection was gathered by the 2nd Duke of Buckingham.

The museum is very easy to reach from the main tourist areas of Oxford; it's just a short stroll north of Broad Street and Trinity College. The museum is free to enter, as is the Pitt Rivers Museum at the rear of the same building. I've been several times to both, and each time I enter the museum I have to pause and soak in the extraordinary interior, with its spacious central courtyard.

The most eye-catching exhibits are the dinosaur skeletons, which are naturally very popular with children. The dodo is a big favourite of mine, but in truth, there is so much to see that you could spend hours peering into glass cases or simply sitting on a chair and soaking it all in. This is easily one of the most enjoyable museums I've ever had the pleasure of visiting. 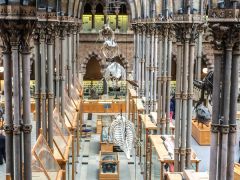 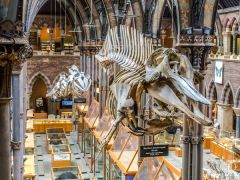 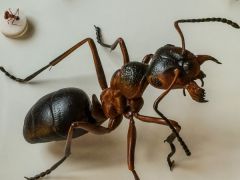 More self catering near Oxford University Museum of Natural History >> 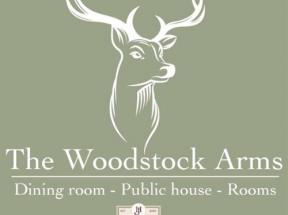