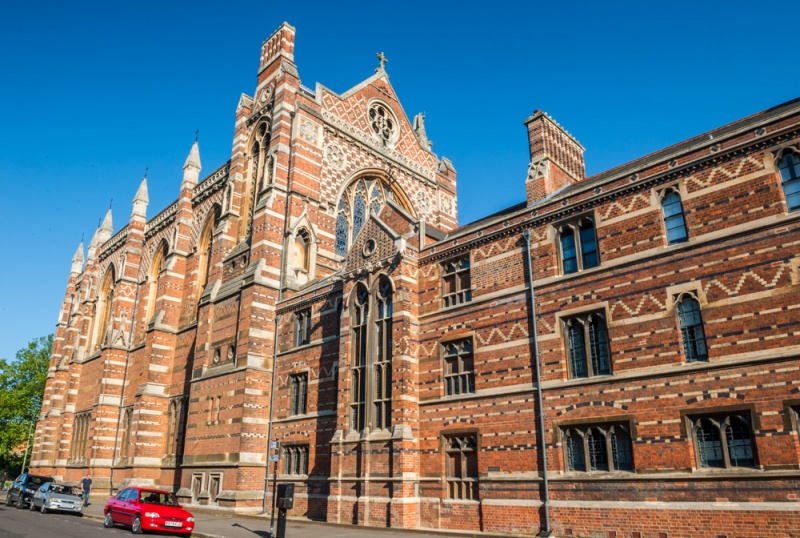 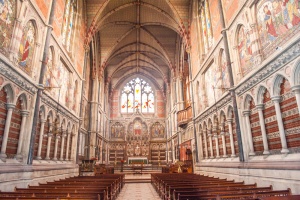 Keble College was founded in 1870 as a memorial to John Keble, a leading figure in the Oxford Movement that attempted to reinvigorate Anglicanism by returning to a more Catholic style of worship. Not surprisingly, its original focus was on theology, but this has since been expanded to take in the sciences.

One of the college founders was Edward Pusey, a close colleague of John Keble in the Oxford Movement. Money to build the new college was raised by public subscription. The major benefactor was William Gibbs of Tyntesfield, Somerset, who made a fortune by exporting guano from the Pacific islands. Gibbs gave funds to build the chapel, and his sons Antony and Martin gave money to build the hall and library. The first Warden was Rev ES Talbot, who went on to become Bishop of Winchester.

Keble is known for its neo-Gothic buildings, designed by William Butterfield in a striking pattern of red, blue, and white bricks. The basic colour is provided by red bricks, with white and blue bricks used to create exterior patterns. Butterfield famously claimed that he had 'a mission to give dignity to brick'. His design resulted in residential rooms arranged along corridors rather than around staircases as was traditional in Oxford.

Keble is considered Butterfield's masterpiece, though not everyone was an admirer of the result. He was an ardent admirer of Gothic style, but was even more consumed by a passion for polychromatic design, with patterns made with tiles and mosaics, inlaid marble.

He rejected the use of paint, because it decayed and paled over time, and as a result, his buildings do not mellow with age, but instead appear as vivid today as when they were built. The high point of Butterfield's design for Keble is the Chapel, a wonderful example of Gothic style using colourful tiles, mosaics, and stained glass to create colourful patterns and a powerful sensory experience.

Butterfield was a High Church follower, famous for his many Gothic church designs and his use of rich colours. His design for Keble College aroused antagonism from the start. Art historian Nikolaus Pevsner called it 'actively ugly', while GM Trevelyan wrote that Butterfield's efforts 'daily give pain to posterity'. 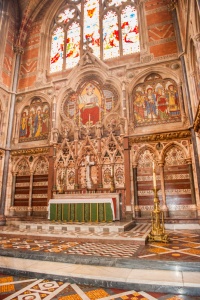 Some students of St John's College decided to take matters into their own hands - literally. They formed a secret society, which required aspiring members to remove a single brick from Keble College. A red brick would give the applicant a standard membership, while a white brick would give a higher membership and a rare blue brick would grant chairmanship of the society. The society's aim was that Keble would be demolished, one brick at a time.

The college itself has carried on the brick theme; each graduate is given a red brick, inscribed with the word 'Keble', along with their diploma.

The first parts of Keble to be built were the accommodation blocks, followed by the Chapel and Hall. The college was laid out around two quadrangles in true Oxford tradition. This was later extended to create four quadrangles.

One of the college's prize possessions is the original of William Holman Hunt's masterpiece, 'The Light of the World', which hangs in the side chapel built especially to house it. The painting originally hung in the Royal Academy in London but was later given to the college by Mrs Thomas Combe, whose husband was head of the University Press. Hunt later painted a much larger copy which hangs in St Paul's Cathedral in London.

In the hall is a portrait of John Keble, painted in 1876 by G Richmond. The library holds rare Greek coins as well as a superb collection of medieval illuminated manuscripts.

Now after all that I've repeated above about the criticism levelled at William Butterfield's architecture at Keble College, I have to add that I love it. It is oh, so Victorian, and so utterly unlike other Oxford colleges.

Keble is usually open to visitors on afternoons during the summer months as well as the Christmas and Easter school breaks. 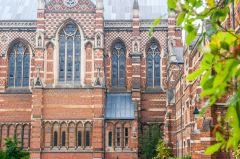 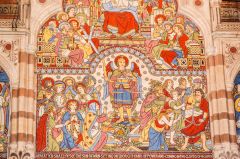 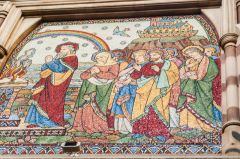 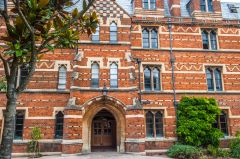 More self catering near Keble College