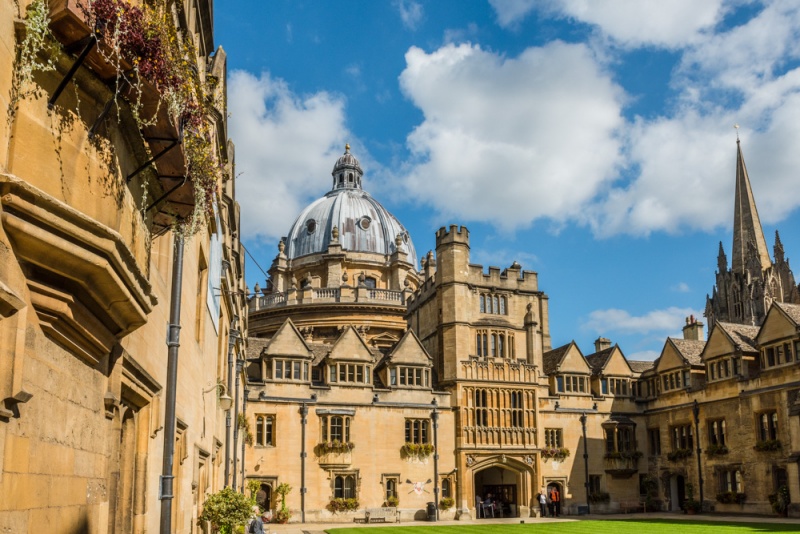 Inside the front quad at Brasenose College

Tradition has it that Brasenose College takes its unusual name from its original 13th-century door knocker (now in the college dining room), shaped like a snout, or nose. The knocker was made of brass, hence "Brazen Nose" or "Brasenose". That simple explanation may not tell the whole tale, however, as "brasenose" may also be a corruption of "brasenhuis", a brewery. 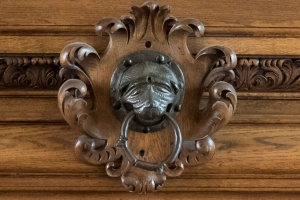 It has been speculated that the knocker signified a place of sanctuary, where escaped felons could remain safe from the clutches of the law. What is known more certainly is that the knocker was stolen from the front doors of Brasenose in the 14th century and installed on a house in Stamford Street.

The college was only able to retrieve its knocker in the Victorian period by purchasing the entire house! To preserve the famous nose from further indignity it was removed to the safety of the hall. There it can be seen from a safe distance; visitors are constrained from approaching the high table in the hall and have to content themselves with examining the knocker from 20 feet or so away.

As with most Oxford colleges, Brasenose is seldom referred to by its proper name. In this case, the name of the college is abbreviated to BNC.

An educational hall, also called Brasenose, was on this site from the 13th century, but Brasenose College can properly be said to date from 1509, when it was founded by Sir Richard Sutton and William Smith, Bishop of Lincoln. 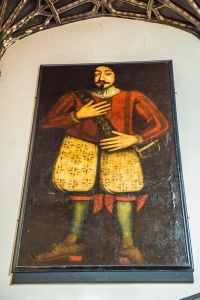 You enter Brasenose through the main gatehouse facing the Radcliffe Camera in Radcliffe Square. Passing through the gatehouse you find yourself in Old Quadrangle, or Old Quad for short. The bottom two floors of Old Quad formed the original college and were built from 1509-1522. The third floor with its dormer windows was added in the 17th century when more space was needed. The most impressive feature in Old Quad is a striking sundial, added in 1719.

From the far side of Old quad look back towards the gatehouse, with the dome of the Radcliffe Camera and the spire of St Mary the Virgin church rising beyond. This famous view was painted by JMW Turner and AW Pugin and was the subject of one of the very first experiments in photography by WH Fox Talbot.

From the Old Quad, the visitor route passes to the Dining Hall, mentioned above, where the panelled walls are lined with portraits of former alumni and professors, among them novelist William Golding and former Prime Minister Henry Addington.

Over one of the doorways is a portrait of Joyce Franklin, an Elizabethan benefactor, and the first woman in England to own a watch. She must have been quite proud of the watch, for her portrait shows her holding it in her hands.

The panelling on the walls dates to 1680 and the fireplace which you see halfway down the hall was inserted in the mid-18th century. Before the fireplace was built the hall was heated by open braziers, and the smoke had to escape through a louvre in the roof. It must have been a very smokey room at times!

From the Old Quad, you pass through a passage to a much smaller quadrangle dubbed Deer Park, probably in an effort to poke fun at Magdalene College, who maintain their actual historic deer park beside the River Cherwell.

On one side of Deer Park is the college kitchen, the oldest part of the present college. It has been used for cooking college meals for over 500 years. On the opposite side of Deer Park from the kitchen is the library, built in 1657. 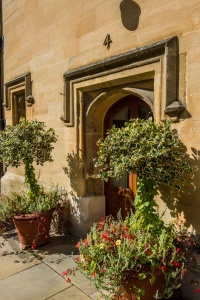 A doorway in Old Quad

Facing you as you enter the quadrangle is the college chapel, built from 1656-1666, making it one of the very few churches to be built during Oliver Cromwell's Commonwealth. The style is unusual, to say the least; a mixture of Baroque and Gothic.

The most striking feature is the exceptional painted 15th-century hammer-beam roof, brought here from Frewin Hall, another Brasenose property in Oxford. The chapel roof was designed to fit the timbers, which were disassembled from Frewin Hall, transported to Brasenose, and reassembled like a giant jigsaw puzzle. The remarkable roof is painted to a design by CE Kempe, more famous for his late Victorian stained glass windows.

The chapel interior is exceptional, even by Oxford standards, with a brass eagle lectern dated 1731 and a marble reredos from 1733. The chandeliers were given to the college in 1749.

Over the chapel door is a striking portrait of John Middleton of Hale, Lancashire (c. 1570-1623). Middleton was reported to be 9'3" tall, and something of an Elizabethan celebrity. The portrait is a reminder of the time he visited Brasenose in 1617.

Beyond Deer Park is New Quad, built from 1881-1911. The architect was Thomas Jackson, who designed the Examination Schools on the High Street. 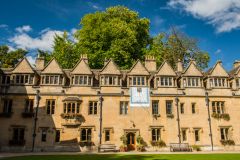 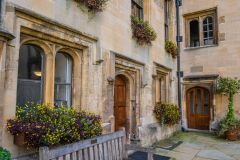 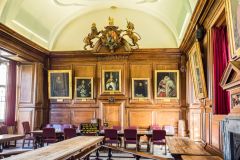 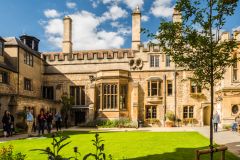 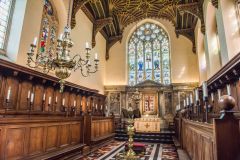 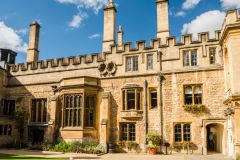