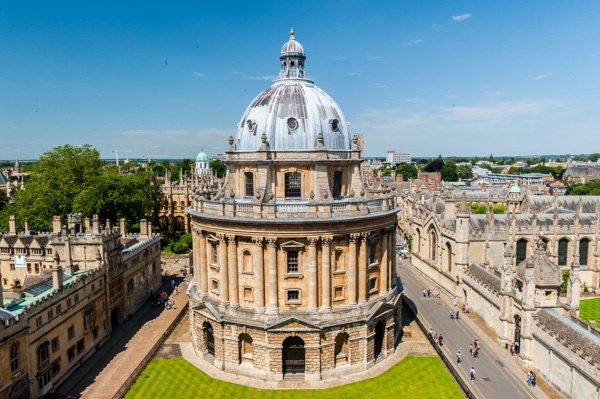 The circular dome and drum of the Radcliffe Camera provides one of Oxford's most iconic sights, and is a distinctive landmark in a city full of distinctive landmarks! The camera (the word means simply "room") was built 1737-1749 with £40,000 bequeathed by Dr John Radcliffe, the royal physician. 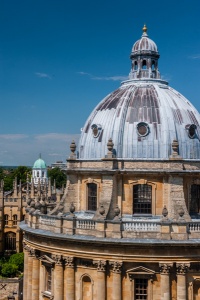 The Radcliffe dome with
the Sheldonian Theatre
beyond

Radcliffe was the most successful physician in England, and in his will he left money to purchase land, build a library, purchase books, and pay a full-time librarian. A site was purchased north of University Church (St Mary's), on a new square created when old houses were torn down.

Designs were called for from several leading architects, including Nicholas Hawksmoor (responsible for much of All Soul's College) and James Gibbs.

It was Gibbs who won the competition, with his elegant Palladian design, though his final plans drew heavily on earlier work by Hawksmoor. Gibbs was also responsible for the Church of St Martin-in-the-Fields, in Trafalgar Square, London. The building was known as the Radcliffe Library, a moniker it enjoyed until 1860.

The library functioned independently of the Bodleian Library, the other main University library. Few readers used its jumbled collection of books, but in the early 19th century a concerted effort was made to focus on natural history and medical books.

In 1860 the Radcliffe Library was taken over by the Bodleian Library and was renamed the Radcliffe Camera. The Camera's collections were gradually moved to other University libraries so that today the Camera functions as the main reading room of the Bodleian. 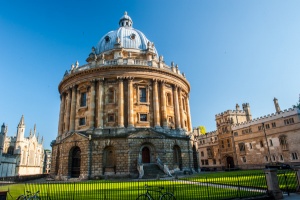 The Camera from the west

The finished building holds some 600,000 books in underground rooms beneath Radcliffe Square. There are two reading rooms, used primarily by undergraduates. The Upper Reading Room holds books on History, Art, Archaeology, and Anthropology, while the Lower Reading Room is focussed on English Literature and Theology.

An underground bookstore lies beneath the lawn to the north of the Camera and is linked by tunnels with the Old Library.

The only way to visit the Radcliffe Camera is by an extended guided tour, taking in Divinity School, Convocation House, Duke Humfrey's Library, and the Upper Reading Room as well as the Camera. Tours currently run on the weekends and one weekday. Please check with the official library website for full details.

The easiest access to Radcliffe Square is from High Street, beside St Mary the Virgin church, or from Brasenose College Lane or Catte Street. By far the best view of the Radcliffe Camera is from the tower of St Mary's church. For a small fee, you can climb the tower to a platform high above Radcliffe Square, with views north over the Camera, All Soul's College to the east, and Brasenose College to the west. 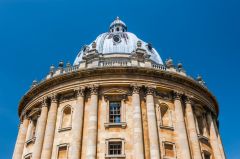 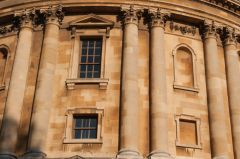 More self catering near Radcliffe Camera