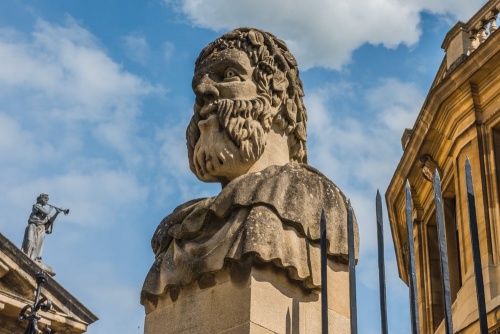 Sitting atop stone columns marking the northern boundary of the Sheldonian Theatre, at the eastern end of Broad Street, is one of Oxford's most peculiar historic attractions; a row of 17 busts of men known as the Emperor Heads, The Oxford Emperors, or, sometimes The Twelve Apostles.

The first mention of the busts as Emperor Heads came in 1911 in the novel Zuleika Dobson, by Max Beerbohm. Despite the name, the busts do not represent ancient emperors, nor, indeed, anyone in particular. 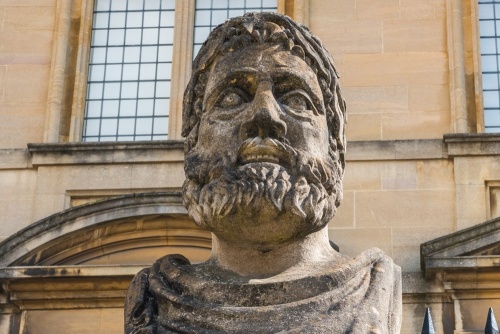 The busts are more precisely called 'herms', as they depict the head and shoulders of each man.

Though at first glance they appear similar, in fact, each bust is unique, and each 'Emperor' has a completely different expression and a different type of beard. 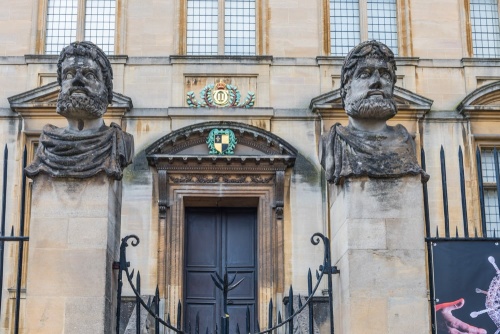 Busts outside the Museum of the History of Science

The story of the Emperor Heads goes back to 1669, when the rising architect Sir Christopher Wren, then just 31 years old, was commissioned to build the Sheldonian Theatre. Wren asked the sculptor William Byrd to create 13 busts for the northern boundary, where the Theatre jutted out into Broad Street.

Byrd carved the busts from Clipsham stone, an oolite limestone quarried near the village of Clipsham in Rutland. The stone is coarsely grained and hard-wearing, and remains a popular stone for building and sculpture to this day. 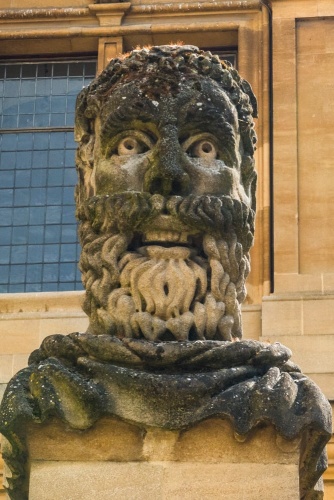 A look of surprise!

Wren asked Byrd to carve each bust with a wide-eyed expression of shock. This is thought to have been a none-too-subtle dig at his patron, Gilbert Sheldon, whose penny-pinching budget made Wren's task in designing the Theatre very difficult.

When the Old Ashmolean building (now the Museum of the History of Science) was built beside the Sheldonian Theatre in 1683, a set of four more heads was added to the building frontage, making a total of 17 busts.

These are the third set of Emperor Heads. The first set lasted 200 years before the combined effects of weathering, the polluted air of Victorian Oxford, and vandalism, left them in a poor state of repair. A new set of heads was installed, based on the originals, but, unfortunately, this set did not use the same hard-wearing stone.

The Victorian busts weathered much more quickly than those installed by Wren, and by 1972 they needed to be replaced again. 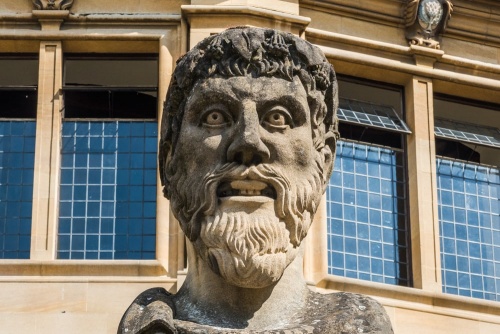 A local sculptor named Michael Black was given the task. Black managed to track down seven of the original Wren heads, five scattered around Oxford as garden ornaments and two in a house in Herefordshire. One of the original heads can be seen in the Fellows Garden at Wadham College, the same college first attended by Wren.

Black modelled his Emperor Heads on Wren's originals, including their shocked expressions, and made each beard different. He also drew on an old engraving to make the heads relatively true to the originals.

Black added amusing touches, such as the small figure of a bird in the hair of one figure, to commemorate the fact that they were carved by a man named Byrd to original designs by a man named Wren. 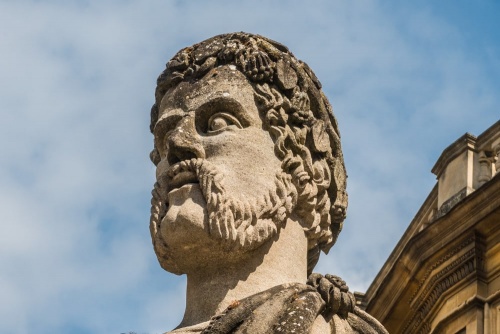 Over the centuries, the Emperor Heads have been a focal point for pranks by Oxford University undergraduates. They have suffered regular indignities like being painted, given lipstick smiles, and having traffic cones for hats.

In recent years a pair of temporary busts of two women were installed outside the Museum entrance.

The Emperor Heads stretch between the Clarendon Building to the east and the Museum of the History of Science to the west, at the eastern end of Broad Street. You can view the heads from either side at any time.