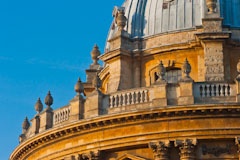 Origins
The actual origins of Oxford are shrouded in the mists of time, though that didn't stop John Rous, medieval historian, from inventing a rather dramatic genealogy for the city.

Rous, writing in his 1490 work Historium Regum Angliae, claims that a city called Caer-Memre was built on the Thames River by King Mempricius during the time that Samuel was Judge in Judea. This would put the origins of Oxford at between 1400-1500 BCE. Mempricius' city was known by a variety of names before the Saxon "Oxenfordia" took hold.

Other medieval historians upheld a popular legend that Oxford was founded by the Trojans, who were supposed to have landed in Britain in about 1100 BCE. Alternatively, a king named Arviragus was said to have founded Oxford in 70 AD. For this king, at least, there may be some historical basis.

More factual evidence of settlement at Oxford comes from archaeological finds of Neolithic arrowheads and other remains in the area. Though no evidence of a settlement exists, we know that there was a large Neolithic population here, possibly as early as 4000 BCE. Evidence of Bronze Age (2000-700BCE) barrows indicate a more permanent settlement during that period.

Roman Oxford
Certainly, Oxford was not a centre of any importance by the time the Romans invaded Britain. Unlike towns such as London, Colchester, and Chester, Oxford seems to have been largely ignored by the Roman conquerors, although there is evidence of pottery kilns here which may have supplied earthenware vessels to the new rulers of the island realm.