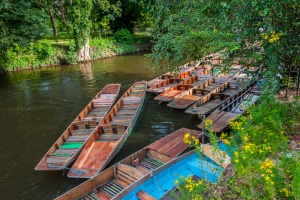 Oxford grew up at the conjunction of two rivers, the Thames and the Cherwell (pronounced Char-well). Indeed, the very reason for Oxford's existence was the presence of a ford for oxen crossing the Thames (that ford was located near the present Folly Bridge).

Confusing the issue of two rivers is the fact that the Thames is also called the Isis within Oxford's boundaries.

Punting on Oxford's rivers is a popular recreational activity, conjuring up images of Edwardian picnics with men in white flannels poling daintily clad companions along the tree-swept waterways. The punt is a shallow-bottomed boat propelled with the aid of a long pole.

Oxford River Cruises
A variety of cruises including lunchtime, sightseeing, and sunset picnic cruises. Boats depart from the moorings beside the restaurant at 'No. 1 Folly Bridge', Folly Bridge, Oxford, OX1 4LB (beside Magdalen College, on the north-west side of the bridge).