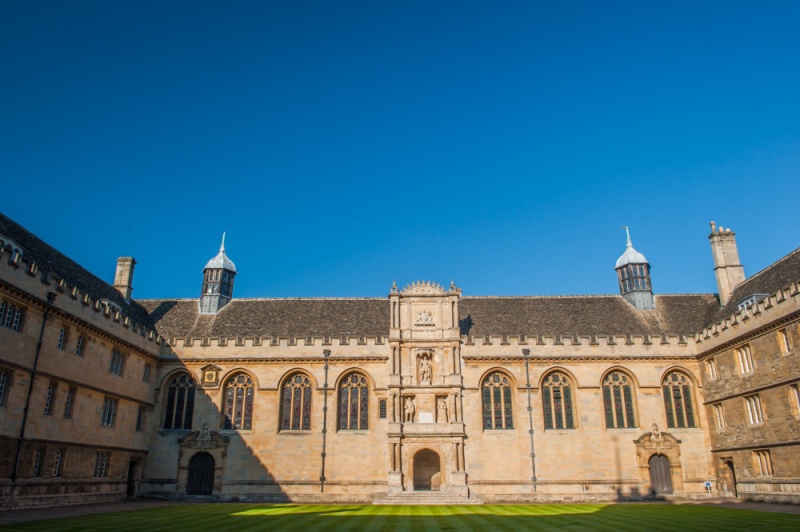 Wadham College is a relative late foundation by Oxford standards. It was founded in 1610 by Nicholas and Dorothy Wadham, making it unusual, though not unique, in having more than one founder.

The Wadhams were wealthy members of an old Somerset family. In 1609 Nicholas Wadham died, and in his will, he left a fortune to establish a new college at Oxford. The task of implementing Wadham's vision fell to his wife Dorothy, then 75 years old. She did not have an easy time of it, for, not surprisingly, Nicholas's relatives fought for a share of his wealth. She found support for her cause at the court of James I in London, and the king granted her a royal charter to found a college in 1610. 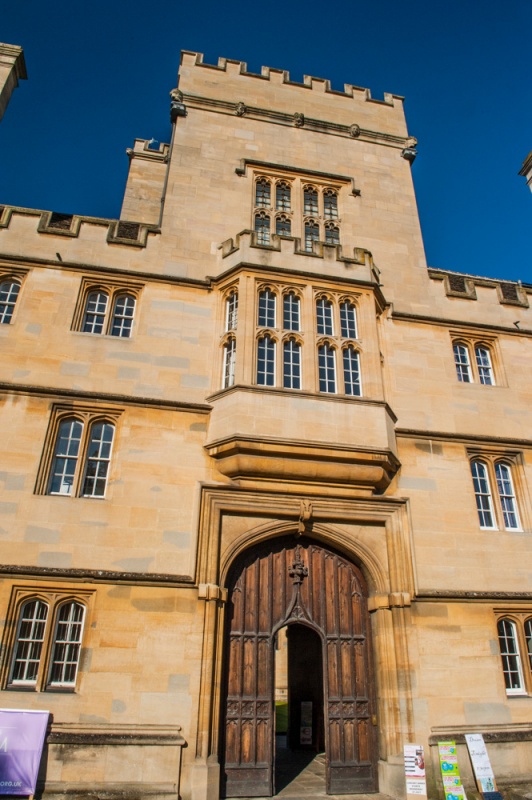 Dorothy Wadham purchased land in Oxford and created a set of statutes. She appointed college officials, including a Warden, fellows, and scholars. She even personally appointed the college cook. She gave some of her own money to the college, and made sure it was ready to open its doors just four years after her husband's death.

Curiously, she did all this at arm's length from her Devon home, and she never visited Oxford in person. Dorothy Wadham died in 1618, by which time the college envisioned by her husband was in full swing.

Wadham quickly became a centre for scientific thinkers. From 1648 it was the gathering place of the 'Philosophical Club', a group of leading chemists, astronomers and anatomists, who met at the home of John Wilkins, the college Warden. The Philosophical Club eventually became the Royal Society. 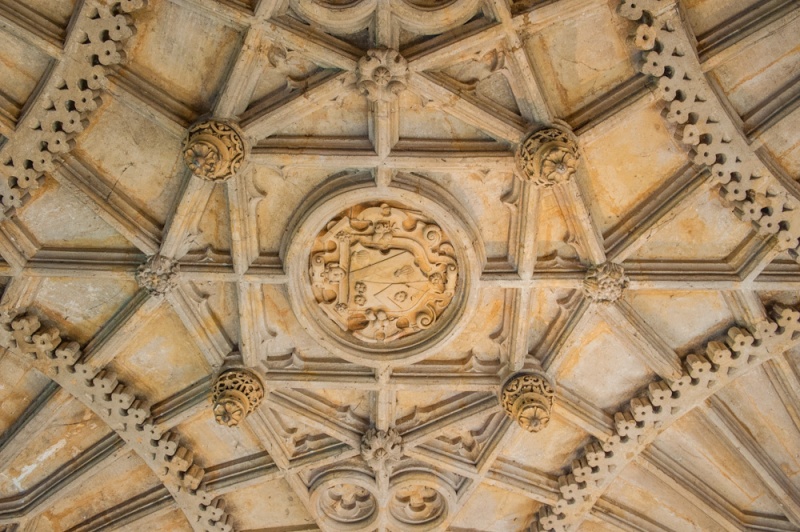 The impressive Front Quad is dominated by the main building, built by William Arnold from 1610-1613. Facing the gatehouse entrance is a huge frontispiece flanked by statues of James I and the Wadhams. Around the quad are arrayed the chapel, hall, senior common room, warden's lodgings, and porters lodge.

The hall is among the largest in Oxford, dominated by an impressive hammer-beam roof. Look for the clock face in the quad; it is said to have been given by Sir Christopher Wren in 1671. Wren is probably the most famous Fellow at Wadham.

From 1650 he studied Aristotle and Latin before extending his studies to science and mathematics before receiving his MA in 1653. He went on to become a Fellow of All Souls' College and Professor of Astronomy at Gresham College before entering into the field of architecture for which he is famous. His interest in such diverse fields was probably a result of his links to the Philosophical Club and the scientists who gathered at Wadham.

The Gothic-style chapel is original, and it retains its original Jacobean pulpit. The chapel screen was carved by John Bolton, who also carved the Hall screen. Bolton was paid £82 for both screens. The colourful east window was the work of Bernard van Linge in 1621. Documents show that Dorothy Wadham fired the glazier who created the Old Testament prophets on the north wall windows, after unfavourable reports of his work. 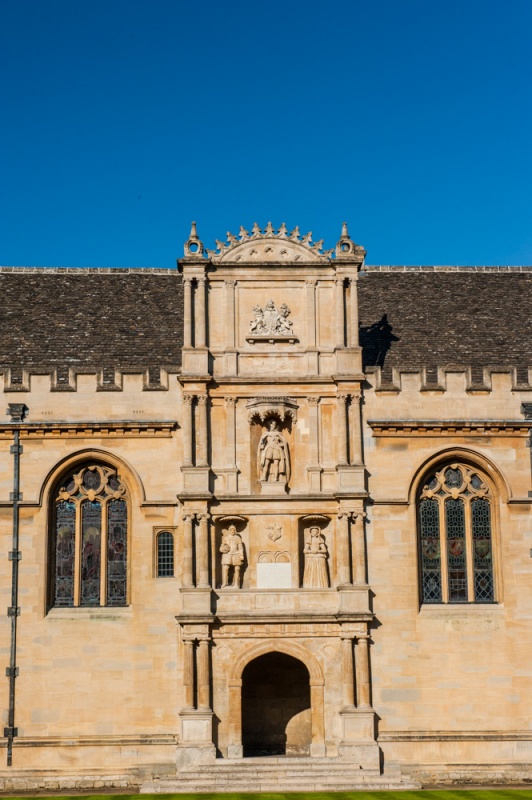 In the ante-chapel is a memorial to Sir John Portman, baronet, and undergraduate who died in 1624 at just 19 years of age. Another curious monument, styled like a pile of books, commemorates one of the original college Fellows, Thomas Harris, who died in 1614 at just 20 years old. The organ is by Henry 'Father' Willis, the famed Victorian organ builder.

On Holywell Street is the Music Room, built in 1748 and thought to be the oldest purpose-built music room in Europe. It holds an organ built in 1790 by John Donaldson of Newcastle. 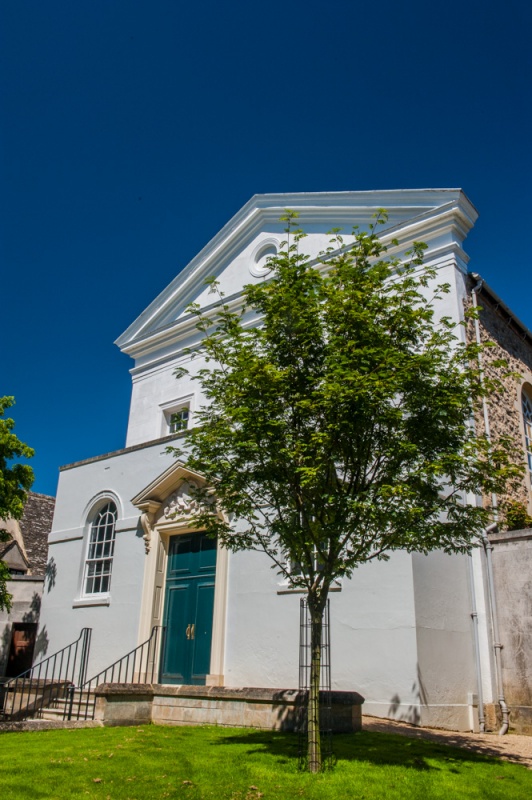 There are 6 acres of college gardens, including the Fellow's Garden, Warden's Garden, and Cloister Garden. Look for the 18th-century building known as a cowshed, built into remains of Civil War earthworks. There is a 200-year-old grape vine, and a collection of unusual 'fossil trees' in the Fellow's Private Garden.

Wadham College is regularly open to visitors throughout the year, but times vary according to the season. For up to date times please see the college website.

Museum of the History of Science - 0.2 miles (Museum)

More self catering near Wadham College