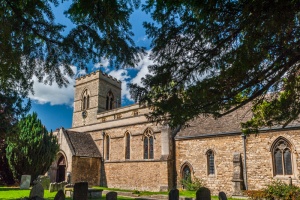 The first record of a church here comes from the Domesday Book of 1086, when a landowner named Edwin declared that he wanted to build a church adjoining his land, outside the north wall of the city. When the church was begun it stood in open fields, beyond the city walls, with nothing between it and the city's north gate.

It is interesting to note that St Giles was begun as a private church; an expression of one man's faith on an unsettled site. It was not long, however, before the area outside the city walls began to be settled, and St Giles soon had a widely spread and thinly settled parish of its own.

This first church was completed around 1120, but in 1139 Edwin gave the church and its estates to the Benedictines of Godstow Abbey, just west of the city.

Curiously, the church was not consecrated until 1200. The consecration ceremony was led by Hugh, Bishop of Lincoln (St Hugh) and a consecration cross commemorating the event is carved into a column supporting the bell tower. An annual fair was established to mark the consecration. St Giles Fair is still held today, more than 800 years after it began.

Bishop Hugh would still recognise the lower section of the bell tower and a pair of windows in the nave clerestory. The top of the tower followed in the 13th century, when a pair of aisles were added, and in the late 13th century the chancel was built in Decorated Gothic style. 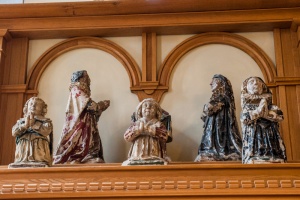 When Godstow Abbey was dissolved by Henry VIII its lands were appropriated by the crown. In 1542 Henry VIII gave St Giles to his personal physician Dr George Owen. Owen's son sold the church to Sir Thomas White in 1573. White, a former Lord Mayor of London, had founded St John's College on St Giles Street, and he gave the advowson (the right to name the vicar) to the College, a right they still exercise today.

Like so many places in Oxford St Giles was affected by the turbulent events of the Civil War, when Charles I made the city his headquarters. In 1643 a group of Parliamentary soldiers were held prisoner in the church, and burned all the furniture. A few years later, in 1645, the vicar of St Giles, John Goad, continued to hold church services through Parliament's bombardment of the city defences, and once again the church was damaged.

Inside the church, perhaps the most interesting historic feature is a set of carved and painted figures representing Henry Bosworth (d. 1634), his wife Alice, and their three children. The figures appear to have been made for a family tomb which was never finished, and today they stand rather incongruously over the modern door to the vestry. 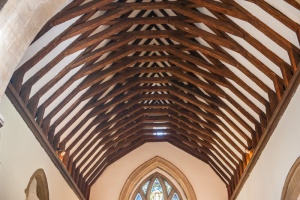 There is 12th-century stonework in the chancel, but even more impressive is the 13th-century chancel roof, which still has its original timber beams. An analysis of the timbers suggests that they were cut in 1288, and this is thought to be the oldest roof in Oxford.

St Giles is usually open one afternoon a week. I tried several times to make it on an open day and finally made it fit with my schedule. As I walked in the door a classical music student at one of the nearby colleges began playing his violin from the pulpit. The sound reverberated around the historic interior, and was enough to send shivers down my spine.

The church has been heavily restored over the years, and much of what we see today is Victorian. The chancel rood is a marvel, however, and the Bosworth tomb figures are beautifully carved and painted. There are several carved corbels at the north-west end of the church, but what really struck my eye was the impressive 13th-century font near the south door.

Outside in the churchyard is what looks like a modern interpretation of a medieval maze, with coloured paths in the turf.

St Giles is a very pretty church, full of history, and is well worth a short visit if you can get there for the limited opening hours! 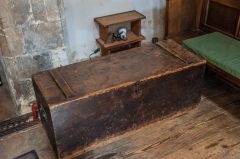