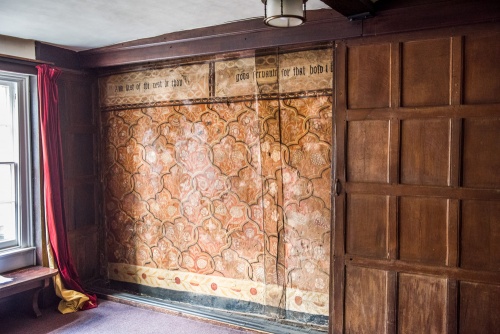 Hidden behind an 18th-century facade on Cornmarket Street lies one of Oxford's hidden treasures, a 13th-century inn once frequented by William Shakespeare. One former bedchamber boasts fabulous 16th-century wall paintings that Shakespeare may have known.

Some time in the 13th century a tavern was established at the southern end of Oxford's Cornmarket, known first as Pate's Inn and later as Somenour's Inn. No. 3 Cornmarket is a rare surviving example of a timber-framed medieval building in Oxford, though the timber-framed structure has been hidden behind an unremarkable 18th-century facade, and the ground floor of the medieval inn is now occupied by a mobile phone retailer.

Beside the shop, a steep stair leads up to a betting shop, but beyond the betting shop another stair winds upwards, and as you ascend to the second floor the centuries fall away and you realise just how old the building is.

During the middle of the 16th century the tavern was known as Tattleton's, after a wealthy tailor named John Tattleton, who resided here from 1564-1581. It was probably during Tattleton's residence that the Painted Room was decorated with its colourful wall paintings.

Ownership of the tavern later passed to John Davenport, a London vintner and friend of playwright William Shakespeare. John became Lord Mayor of Oxford in 1621. His son William became a playwright and a protege of Shakespeare, but was he also something more? Was he, in fact, Shakespeare's own son? 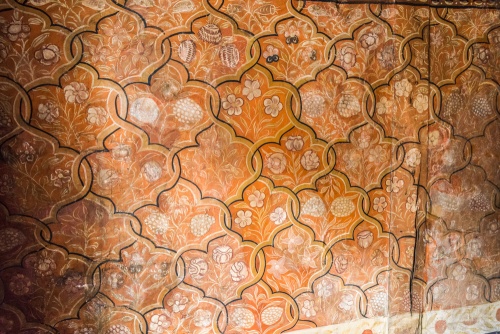 A closer look at the strapwork and floral pattern

John Davenant and his wife Jane met Shakespeare in London and became firm friends. They later moved to Oxford and set up a tavern on Cornmarket in 1600. Four years later he was granted one of only 3 licenses from the city to sell wine.

When Shakespeare stopped at Oxford on his way between Warwick and London he naturally stayed with the Davenport's at their inn, very probably occupying the best bedroom, what we now call The Painted Room. When William Davenport was born in 1604/5 the playwright acted as his godfather.

Jane Davenport and William Shakespeare have been romantically linked, although an affair has never been proven. William Davenport certainly believed that he was Shakespeare's son as well as his godson. He saw himself as carrying on his famous father's legacy by becoming a successful playwright himself and rising to become Poet Laureate.

We do know that Shakespeare's acting troupe, The King's Players, performed in Oxford in 1610, putting on Ben Jonson's The Alchemist and Shakespeare's own Othello. The performances were probably held at the Guildhall, where the Town Hall now stands.

William Shakespeare may never have seen the paintings in the Painted Room. Around the time that the Davenports took over the tavern the paintings were covered over with wooden panelling. By the turn of the 17th century, the wall paintings would have been considered old-fashioned, so the lodging rooms were panelled over. The panelling, in turn, was covered with canvas and paper.

And there the paintings stayed, hidden behind layers of wall coverings, for three centuries. In 1927 Mr EW Attwood discovered the 16th-century wall paintings during work on the caretaker's flat at No. 3 Cornmarket. He called in the Victoria and Albert Museum and the V&A experts came up with an innovative solution to protect the paintings by putting the wooden panelling on rollers.

This means that the panelling can cover the paintings from damaging sunlight when the Painted Room is not being viewed, but can be pulled back to reveal the paintings when the Room is open to the public. 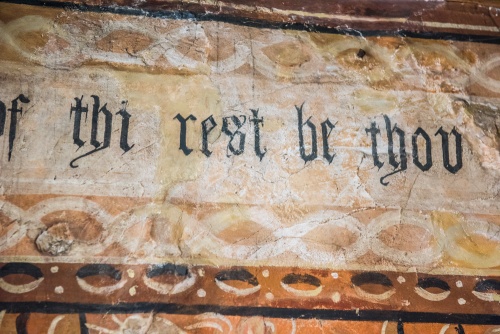 A section of the painted frieze

At the top of the north wall is a frieze which runs along the wall and halfway along the east wall to finis above the chimney breast. The frieze is inscribed with text which reads,

'First of thi risyng]
And last of the rest be thou
gods servant for that hold i best
In the mornynge earlye
serve god Devoutlie
Fear god above allthynge
...... honour the kynge'

In other words, be a good Protestant and honour the king.

Beneath the frieze is an intricate geometric pattern of interlaced strapwork sections infilled of flowers and plants. The style is similar to patterned textiles from the Middle East, but it is very likely that each flower had a symbolic message. The artist used a limited colour palette of red, ochre, black, white, yellow, and red.

These ordinary colours could have been applied by any craftsman, such as a joiner or plasterer, whereas more complex colours were reserved for painter stainers, whose work was considerably more expensive. So here we have an owner who wanted his room to be fashionably painted, but didn't have much of a budget for the job.

The fireplace on the east wall dates to about 1350. It bears a large inscription reading IHS, the common abbreviation for the Latin phrase, 'Iesus Hominum Salvator', which translates loosely as 'Jesus, Saviour of Mankind'.

The inscription probably predates the main wall paintings. The IHS symbol was strongly linked to Catholic worship, so it seems likely that it was painted during the brief reign of Mary I, when the state religion reverted to Catholicism. 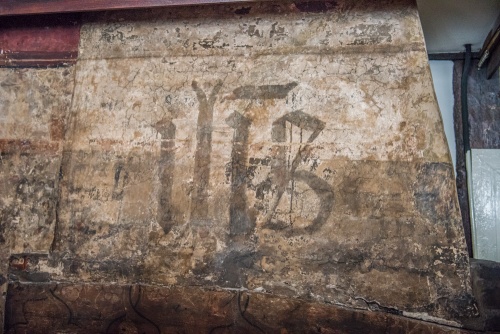 At the present time the Painted Room is open to the public for the annual Heritage Open Days event in September or by special arrangement with the Oxford Preservation Trust at other times. The Trust is actively seeking ways to open the Room to visitors on a more regular basis, and we will update this page when new plans are announced.

We visited on the Heritage Open Days event, and discovered that the Painted Room was one of the most popular sites in the city that day. There was a long queue stretching down the stairs and out into Cornmarket. It took us about 20 minutes to get to the top of the queue, then we had to wait in the neighbouring room until the Painted Room itself was clear of the previous group.

It won't take long to actually explore the room, which is quite small, but the exposed sections of wall painting are simply superb, and it is fascinating to imagine what the room would have been like when William Shakespeare was a guest within these historic walls. And if these walls could talk, what stories might they tell about the Bard of Avon's private life? 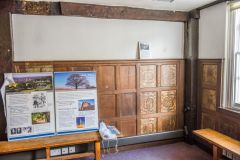 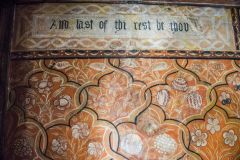 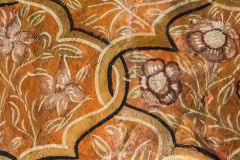