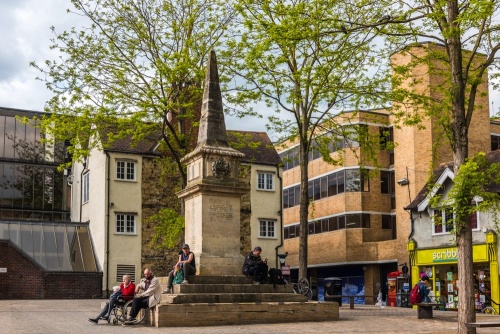 On 6 July 1900 local dignitaries gathered in Bonn Square, Oxford, at the meeting of Queen Street and New Inn Hall Street, to unveil a memorial to the 61 men of the 2nd Battalion Oxfordshire Light Infantry who died in the Tirah Campaign in northern India.

The Tirah Memorial was the first war memorial to be erected in Oxford, and takes the form of an obelisk atop a high stone plinth. The obelisk stands 25 feet high (roughly 7.6m)and is supported by foundations measured at 20 feet deep (6.1m). Stone for the base was quarried at Doulting in Somerset and the upper part comes from came from Monk’s Park Quarry in Bath.

The memorial was designed by Francis Inigo Thomas, who was better known as a garden designer and artist. His most well-known designs were the rock garden at Sandringham House in Norfolk and the formal gardens at Athelhampton House in Dorset.

The Bonn Square site was then a public garden but has since been transformed into an open public square. It stands on the site of the graveyard of St Peter-le-Bailey parish church, which was pulled down in 1873 as part of a road-widening scheme (a new St Peter-le-Bailey Church was erected further up New Inn Hall Street in 1874).

During digging to prepare the memorial's foundations, workmen found human remains. These were re-buried at Osney Cemetery. 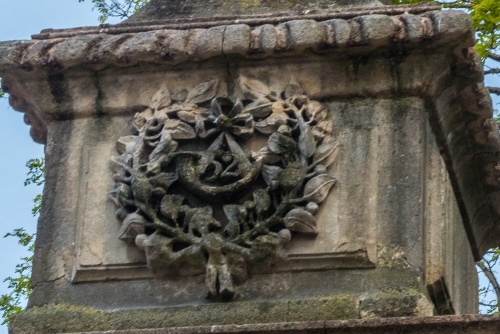 In 1897 the Afridi tribe rebelled against the British Raj and attacked forts along the Khyber Pass, linking Afghanistan with what is now the Khyber Pakhtunkhwa province of Pakistan. With their allies, the Orakzais, the Afridis had an estimated strength of over 40,000 men.

The Punjab Army Corps, commanded by General Sir William Lockhart, was assigned to put down the rebellion. Lockhart had an estimated 34,000 soldiers at his command, including native Imperial Service troops under their own officers.

In a campaign that lasted 3 September 1897 to 4 April 1898, Lockhart was able to quell the uprising, though not without difficulty, and not without battling the fierce winter weather as well as the Afridi and their allies.

There is an inscription on the south face of the memorial plinth below a carved wreath. The wreath bears the number 52 for the old number born by the Battalion as a Regiment of the Line.

THIS MONUMENT WAS ERECTED
BY THE OFFICERS, NON-COM-
MISSIONED OFFICERS & MEN
OF THE SECOND BATTALION
OXFORDSHIRE LIGHT INFANTRY,
IN MEMORY OF THEIR COM-
RADES WHO DIED BETWEEN
THE 15TH OF AUGUST 1897 AND
THE 4TH OF NOVEMBER 1898

The other three faces of the memorial plinth are inscribed with the names of 62 men. 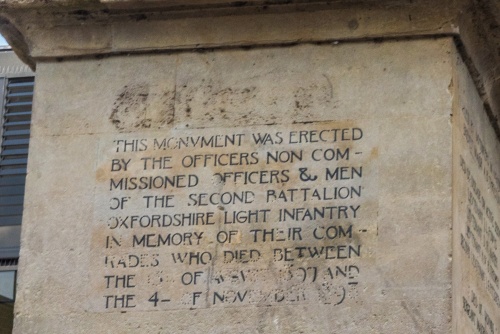 If you're sharp you will have noticed a discrepancy; I said earlier that the memorial commemorates 61 men of the 2nd Battalion Oxfordshire Light Infantry who died during the campaign, yet there are 62 names on the memorial.

That is because the first name on the monument's east side is Brevet-Major AB Thruston, who did not die in the Tirah Campaign, but in Uganda, where he was part of the MacDonald Expedition in October 1897. Thruston was one of three British officers killed by mutinous Sudanese troops.

Of the 61 other names, the vast majority hold the rank of Private, with the addition of 3 buglers and 10 officers.

The Tirah Memorial was unveiled in a ceremony that included speeches by Frederick Parker Morrell, Mayor of Oxford, Alderman Buckell, the Hon. & Revd W Talbot Rice, Rector of St Peter-le-Bailey Church, and Colonel Strachan on behalf of the 2nd Battalion Oxfordshire Light Infantry. The monument was unveiled by the Mayor's daughter, Frederica Morrell, because her mother Harriette could not attend.

Interestingly, Morell was the first graduate of the University of Oxford to hold the office of Mayor of Oxford. His son Hugh St John Morrell served with the Cheshire Regiment and died at sea in 1898.

Note: There are three other memorials dedicated to those who lost their lives in the Tirah Expedition. There is a memorial garden in Dorchester, Dorset, to men of the Dorset Regiment, a memorial at North Bridge, Edinburgh to men of the King's Own Scottish Borderers, and a memorial in Eastbourne, East Sussex, to soldiers of the Royal Sussex Regiment. 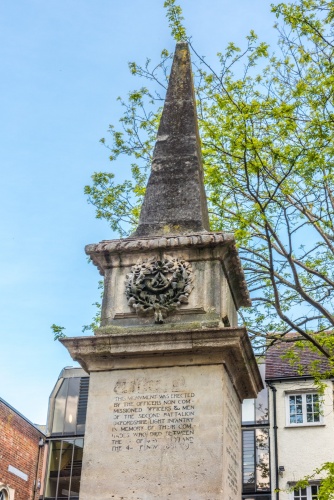 The memorial stands in Bonn Square, at the junction of New Inn Hall Street and Queen Street, opposite the entrance to the Westgate shopping complex.

When my family and I visit Oxford we usually take one of the park and ride services, but if we have to drive into the city centre we generally use the multi-storey parking area under the Westgate Shopping Centre. When we emerge from the shopping centre we find ourselves on the edge of Bonn Square.

I can't count the number of times I've passed through Bonn Square and wondered to myself what the peculiar obelisk in the centre of the square was. On our last visit, I vowed to myself to find out more.

It was impossible to read an account of the Tirah Campaign without being moved by the bravery and resilience of the combatants on both sides, especially the tale of how the soldiers and camp followers of the second division, under Major General Yeatman Biggs, marched 34 miles up the Bara valley in bitter cold, battered by sleet, snow, and rain, while under constant attack.